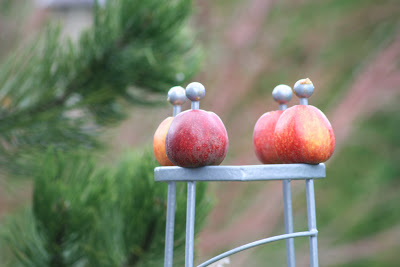 It’s Friday and I thought I’d have a bit of fun feeding the birds. I do enjoy feeding the birds that visit my garden with different foods to see who tries them and if these foods will bring in new species of birds. I am pretty sure it was a Fat Cake that brought in a male Blackcap on New Years Day this year – what a surprise that was! A female was seen a week later but they weren’t the only ones who enjoyed the Fat Cake and the invasions of Starlings that followed probably cost us the Blackcaps as they left at the same time.

Yesterday, I began some tidying in my front garden and removed an obelisk from my border. I put it away into my shed expecting not to use it until next year. Today I bought some fresh apples. My fruit basket had a few apples that were starting to go past their best so I decided not to mix them. I could probably have used the best bits of the older apples for a fruit salad but instead I decided to be a bit more creative with them! Can you see where this is going? 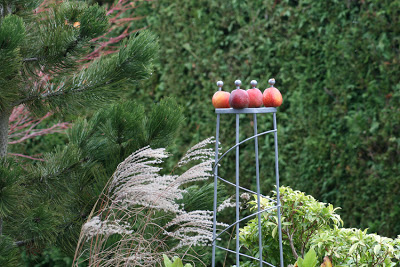 Why on earth did I do this? Well, this is just a variation on a theme really. Many birds do enjoy apples that drop from trees when they are left on the ground and begin to go rotten. A couple of years ago I tried something that I saw in a gardening magazine, Gardener’s World I think. They suggested making a garland of apples and hang it out for the birds who would eat them when they began to go soft. You used thick wire and threaded the apples through it to make the garland.

The garland didn’t get the interest of my visiting birds at that time. However, now I have many a wide variety of birds visiting my garden. My daughter also spotted a squirrel two days ago although I only put out peanuts at night for the hedgehogs so I don’t know if the squirrel got any food or it was just following the birds to investigate my garden. So will anyone be interested in the apples this time?

Perhaps, the birds will just ignore them as they aren’t on the ground or on a tree. I have sited my obelisk next to shrubs and beside a tree so the birds can see them from there. I cored all the apples and expect they will go soft quite quickly – this also made it easy to push them on to my obelisk. I also put another three apples through small branches of my small Acer tree just under the canopy. You can see the small feeding tray here too. This feeder is deliberately away from the others – a secret quite feeder used by Dunnocks, Blackbirds a robin and the occasional Blue Tit. 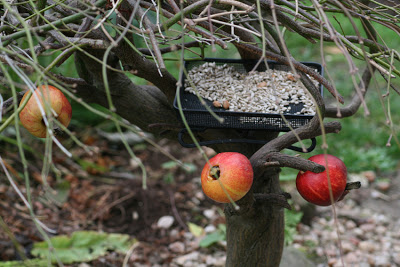 Finally, I have to add I have absolutely no intention in attracting rats – although I don’t actually know if they would be interested in fruit. I will not leave these apples until they are very rotten – before that point I will lift them and put them in my compost bin. Do I feel lucky with this experiment? Mmm not sure really but it is fun to look out on to and hey, it adds a bit of colour to the garden! If any bird did show interest I would take a guess that it would be one of the many blackbirds that visit my garden.

The photos above were taken in my garden on November 9th, 2007.

6 thoughts on “Apples grow on Obelisks”