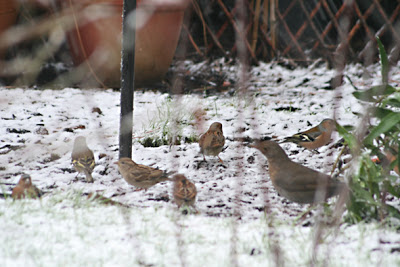 Snow had been forecasted for later on today so I had intended to get out with my camera and photograph some plants showing signs of new growth. However, by 8am the snow had begun to flurry around the garden. It was just starting to lie on the ground and then it stopped. The winds of last night were still with us so it didn’t stay on the plants long. Then it gave another flurry and so it went all day long. 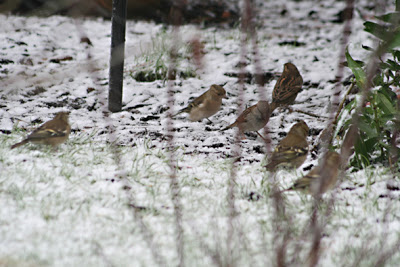 A number of comments I received on the results post of my Birdwatch count mentioned garden birds perhaps not coming to the feeders as it was too cold. I have to say that is when my feeders are at their very busiest! On cold, windy and wet days like today the birds swoop down to the feeders in their twenties. The areas below the feeders are probably five times as busy as on a fair dry day. 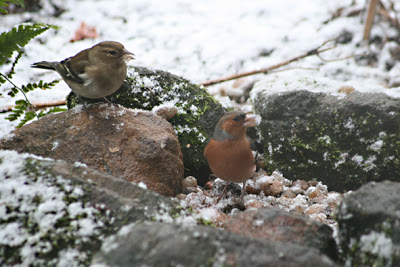 Below my little Acer tree there were many chaffinches in pairs too mixing with the house sparrows, dunnocks and blackbirds. A count today gosh – I could only guess! I also spotted a male Sparrowhawk pass by today too. I would guess my bamboo beside the feeders, which was blowing about a bit, would have made it difficult for him to attempt a catch from this area today. 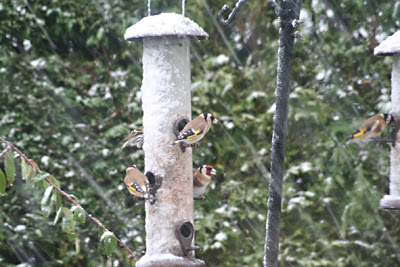 Numbers of goldfinches on days like today never cease to amaze me. Where do they all come from? I can see seven or nine some days and only five others but when it snows up to twenty can come. They also tend to stay longer than the other birds when they get spooked and fly off to safety. It really is fascinating to watch the behaviour of the different birds that visit. Although, I still cannot get used to seeing the goldfinches with snow – they look like they should be in sunshine. 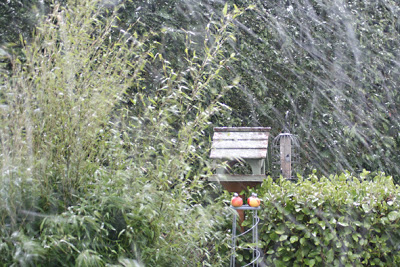 Strong winds have knocked my feeder pole above a little squint as you can see but this is where the shrubs and hedge really play their part. They act as a great wind break and a resting place for the birds and wildlife too. Today saw the birds sitting in little gaps of my hedge just waiting for the feeders to be free. There is no point at all in fighting for food today as they will need all their energy to be out in the cold actually at the feeders! So, there was relative harmony today – just groups of birds hurriedly feeding together. The shrub, griselinia, on the right in the photo above is another great place for the birds to hide in days like today which is nice – as this is my favourite shrub in the garden.

By darkness the garden looked like the snow had never been! We still have strong winds and tomorrow we are looking at widespread snow across Scotland. I expect I’ll need to top up the feeders again at lunchtime as it will be another busy day in the garden!