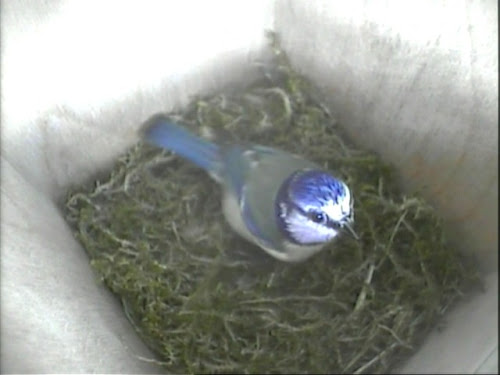 Please accept my apologies for taking so long to post an update on the activity in my Nestboxes. As you read this post it will become clear why. So, what have the Blue tit pair that were interested in two of my nestboxes been up to? Well I am feeling confident enough now to say that they have chosen my Camera Nestbox. Oops now I’ve said it…

The male occasionally still goes to the Arch box but he has now started visiting the Camera box and has even been in to inspect progress. I doubt he was impressed! The photo above was taken three days ago but let’s just say since this visit the female has made a few changes. 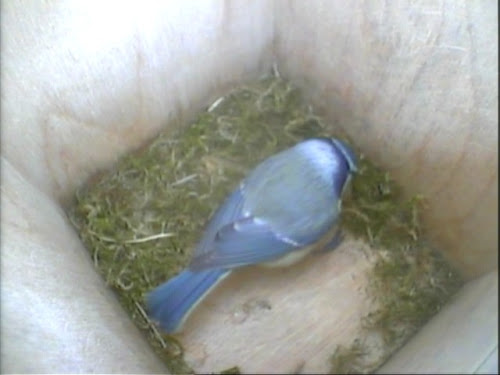 She clearly didn’t like this décor or the next or the next. Suffice to say she is making seriously hard work of building a nest. This would have worried me but the female who used this Nestbox last year did exactly the same. It is painful to watch though. I have found myself talking to the screen on more than a few occasions! 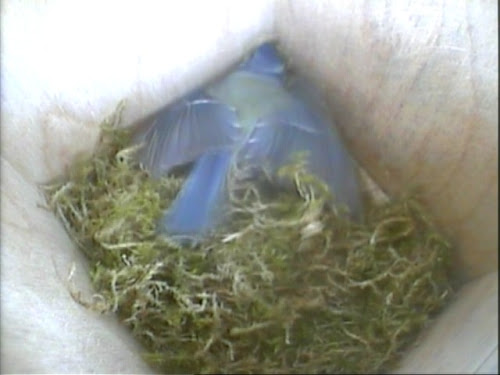 Her nesting shuffles appear to be in need of a bit of practise too! It was pointed out to me in a comment by Martin, who also has a Nestbox with a camera that “When she does her ‘shuffles’ it’s funny how she is hopping around the box wobbling as she goes! Normally they get their chest flat down on the floor – unusual !” I have to say I agree as I have been watching her shuffles quite closely. 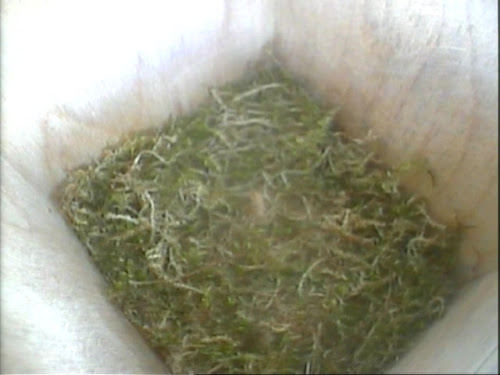 The first piece of moss came in our Camera Nestbox ten days ago and the photo above shows how our Nestbox looked at 4.30pm today. I looked in again later before it went dark in our box and it looked much the same. Each time I see an image like this I think the nest is moving on and she will add the next layer of material. So far this has not been the case – hopefully this will happen sometime soon.

I am heartened to see the male is showing interest this year. Last year’s male wasn’t at all interested at this stage. I am guessing sometime soon we will see the male visiting bearing gifts of food to reward her hard work.

To let you see what has been going on I have made a compilation of video captures. This video is a little longer than usual at just over three minutes. It shows just how much moss gets taken in and out of the box from both inside and outside the Nestbox. It also shows the male hanging around for support. I have a number of video captures but the ones I have used below were taken in the last three days.

All outside video footage was taken today. At the end there are some still captures showing examples of how the Nestbox has been filled and emptied so many times in the last ten days. The final two still captures are of the only night the female has roosted in the Nestbox which is a week ago now.

What goes on inside a nestbox, video 3:15 with background music, try 480p quality.

Finally, I should say that I do expect this nest will eventually take shape and then it will be quite a different waiting game! For the moment I am also enjoying seeing the much more efficient nest builder that Jamie has in his Nestbox. However, I do have faith that the blue tit female in my nestbox will come good yet so please do return to see how she is doing.

All photos and videos above were taken in my garden during 10th-13th April 2008.

9 thoughts on “What goes on inside a Nestbox?”