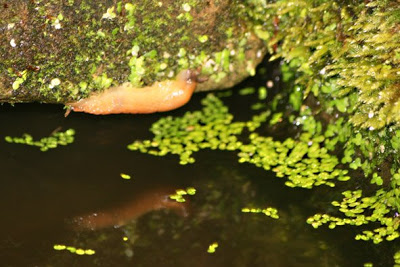 The contestants are beginning to appear. The line-up stands at three and late arrivals are still welcome! The challenge – to see what wildlife visits a pond at this time of year. I knew we had a toad around our small pond and after spotting it last week I wanted to see what else did. I also hoped that over a period of three weeks I might capture some images. Well, the cameras have been rolling…

Contestant number one made a cliff-hanging entrance – a lemon slug. Looking through my favourite wildlife reference book

I think this is what it is but I’d welcome confirmation on this. I did have difficulty looking at this slug to focus on it – I liked its reflection in the pond though! 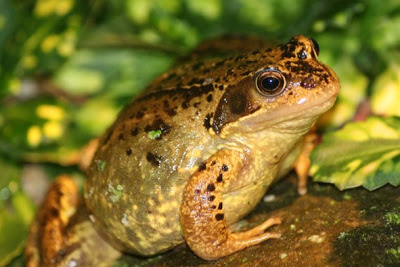 Contestant number two had a double identity. Mm… the toad I spotted last week was actually a frog! Okay, hands up, I got it wrong but I am not disappointed at all. What a beauty it is! I was thrilled both to see it and get photos. We definitely do have a toad hiding somewhere but I had no idea we had a frog too. This is where capturing photos helps with ID’s – my book is a photographic reference one and that is why I find it so useful. 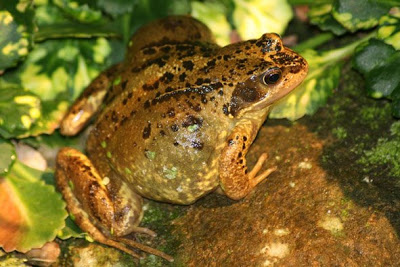 This common frog had clearly been swimming in my pond last Friday night as pieces of duck weed could be seen on its beautifully patterned back. Now what you can’t see so clearly (I didn’t notice at the time) is a balloon type bulge at the side further away. I wonder if this happens if it feels under threat. Maybe someone knows? 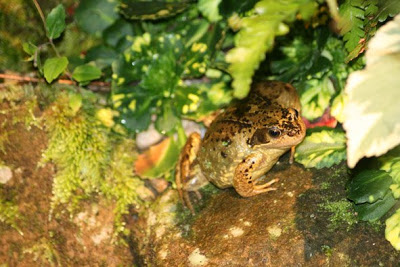 The sandstones rocks and ground cover plants around my pond had been great camouflage for this frog. I had been looking along the waters edge – really quite closely. I stepped back and with a final glace as I was about to walk away there it was sitting above the water.

I couldn’t believe I had nearly missed it! However, I do wonder if it has a much bigger brother! Two weekends ago, when I was busy in the garden, I got the fright of my life when I nearly stood on something on the grass path behind my pond. My challenge now is to get a photo of that – looking at the photos above I’d say it was a common frog too but much larger than this one.

My night cam, on tripod, has been out positioned at different parts of my pond in the evenings but I have never seen the frog or toad on it – only the slugs slowly sliding around! Ah… but the video capture below is just great. I knew the cat from next door, Edmund, has been conducting his own pondwatch!

What I didn’t expect to catch on film was Edmund pond watching and a hedgehog eating peanuts at the same time! So what happened next? Argh… my memory was full and the video capture ended! I continued to watch the screen to see Edmund walk along the wall behind the hedgehog shortly afterwards. Edmund didn’t pay any attention at all to the hedgehog and the hedgehog didn’t lift its head out of the bowl of peanuts. What a magic moment! Oh wait a minute… I’ve just found a couple of photos I didn’t remember taking. 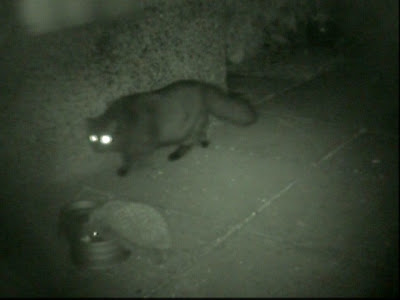 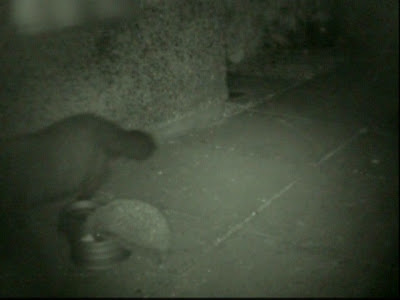 Mice have been seen around the caves of my pond in the evening. They run out for sunflower hearts on the ground and then dash away again into the caves. I know they are not there at the moment as I would definitely see them in the night cam images as their eyes catch the light. I also suspect that with the rainfall we have had this summer the hidden caves would be flooded. I guess this is what Edmund is looking for but now he is off on his hols. 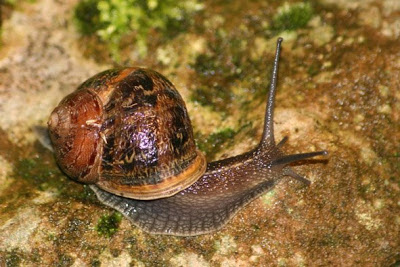 Contestant number three is the garden snail. Okay, as gardener I don’t like the damage they do to my plants. However, I cannot deny that they do have a beauty of their own too. I watched this one move around the mossy rocks and it was fascinating to see how it gracefully it moved. Oops… did I really say that? Yep, on the rocks they looked great but when they start climbing higher – oh that’s a way different matter! 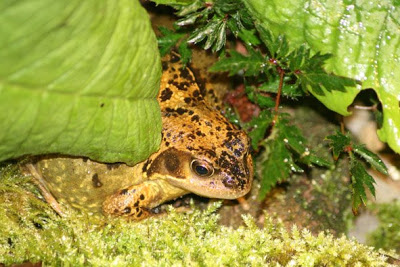 Most of these images have been captured after midnight. I often write posts later in the evening as this works my family life. I started this one last night but it got too late to finish. Before turning in for the night I went outside with my camera once more. I stood in the still quiet night and did very well to spot Contestant number two again. The common frog was hiding under leaves of primula and astilbe. I am pretty confident that this is contestant number two as the patterns are the same. Having photographs really helps.

Finally, as I wait for big brother to arrive at my pondwatch am I considering any evictions? Oh yes… sorry you may have a pretty name Lemon Slug but consider yourself nominated!!

All photos and the video above were taken around my pond during the last week of August 2008.