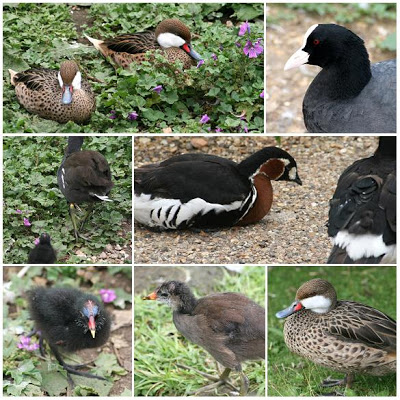 Do you look out for new plants at garden centres, new bird sightings in the garden or on the beach or how about trying to spot camouflaged wildlife out in the wild? When I began this blog I guess I could honestly only answer ‘Yes’ to the plants. I knew some birds visited my garden but I guess I just took these visits for granted.

My bookshelf now has Bird and Wildlife books joining the Gardening and Plants ones. My interests have increased and I do hope I have passed on some of my enthusiasm for learning more about what visits our gardens too. When on holiday I am always drawn to visit new gardens but now I also look up wildlife reserves too.

The trip of the year for me (ticking all boxes) has to be Pensthorpe Nature Reserve in July where I found a fantastic garden by Piet Oudolf as a bonus! I didn’t go there for the plants though. This was a trip to see birds. However, my bird recognition was really minimal so with my camera I snapped what caught my eye not knowing if these birds were special or not.

Firstly, it was the shear numbers of birds that really took me by surprise. They were everywhere from the water to the paths we walked on.

Next it was the variety of shapes, colour and plumage that we could see (I’m getting the lingo now). We were also being followed… thanks to my daughter having a bag of seed (bought when we arrived) in her pocket. We took refuge in one of the enclosures and discovered that some birds are not quite as pretty as others and I was feeling a little uncomfortable taking my photos. 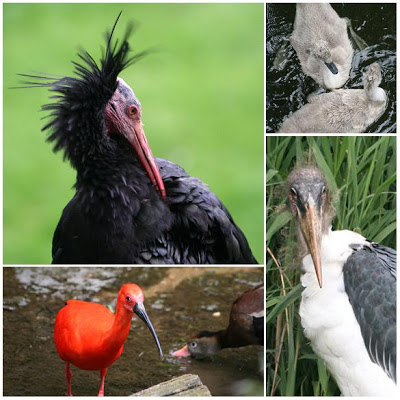 Ducks, ducks, were every where on the water as my daughter dropped seed from the wooden walkways to feed them. Some birds spun around and round on the same spot like dodgem cars at the Fairground.

It was funny to watch. They made quite a noise too but one bird really caught my eye there – quite a thug it was too. The coot (seen in first montage with white beak) was being quite aggressive towards the other birds really making its presence known in the crowd! 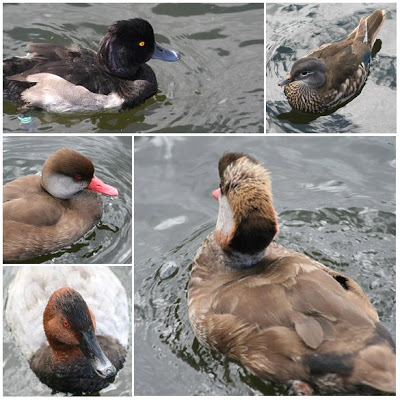 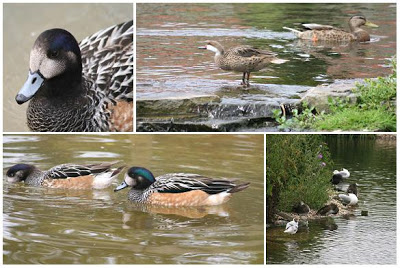 We followed paths to other areas which went from woodland out to a waters edge once again. It was a warm day and many birds were now preening and sunbathing too.

I found it amusing to see oyster catchers on floating gravel decks. Oyster catchers quite commonly nest on roofs of schools in Scotland and feeding their young coincides with exam time giving the pupils a little extra stress with the noise they make then! 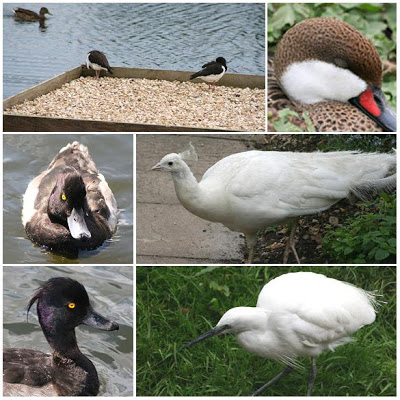 So have I any favourite bird sightings from Pensthorpe? Well, funnily enough I do have a couple and not ones I would have expected. I am guessing they are both waders and I do believe both juveniles too.

I have seen photos of waders in many other blogs but I have to admit they have never really caught my attention before this visit. However, the Ruff in the photo below I found completely enchanting seeing it walk around the shallow water. 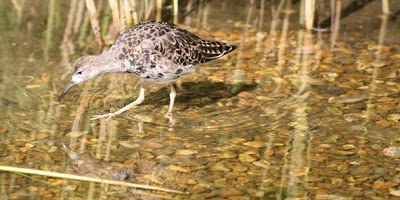 The Black-necked Stilt also caught my eye and what a noisy little thing it was too! You will hear it in my short video. This clip is a bit wobbly as I was trying to take it out of the way of other visitors.

I have also dropped the sound at one point as there were people talking around me too. It gives you an idea of how it moves about and me a great memory of this day too. 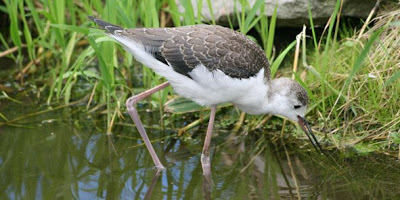 One of the first birds I noticed when we walked out on to the reserve were the young Moorhens running around looking for parents to follow. Funnily enough they were also the last as I left through another gate.

The video clip below was taken in the butterfly garden and there were no other birds around. I didn’t spot any butterflies either! However, the ‘parent’ Moorhen found something to feed the young from the Astilbes!

There is background music in this video.

Once again, I had to cut the sound out as I was not the only one who spotted the young Moorhen in the shallow water. My clip was being narrated by other visitors also delighted to see it. I moved to the other side of the water to get a closer (not clearer) view of this lovely moment. I nice surprise end to my visit.

Seeing birds at a Reserve really is a great way to see birds most of us would never see otherwise. However, I suppose it is a little like going to a Zoo for birds. Then again, just like Zoo’s, conservation is also a big issue for birds and reserves play a huge part with that too.

The birds we saw definitely looked at home there that is for sure. Reserves are also a place for food and shelter for any passing or migratory birds and I would imagine they, just like me in my garden, will be delighted to see new birds arrive.

There are many, many blogs that post on ‘birding’ days out where people like Tricia or Lisa head to an area that they have perhaps seen birds before or have heard will be there. My hat goes off to them and anyone else for their patience in watching for, trying to photograph and then posting on the birds they see – quite, quite different from my visit to Pensthorpe.

However, I thoroughly enjoyed my visit to Pensthorpe seeing the plants, birds and wildlife there. I have one ‘small’ extra posting in mind yet. I should perhaps say I have posted larger individual photos of the birds in my montages to support this posting if anyone is interested in ID’s.

Finally, I would like to say a huge thank-you to the members of the Birdforum who helped me out with my ID’s. I would never have known where to start with some of them.

All photos and video shown above were taken at Pensthorpe Nature Reserve in Norfolk, England in July 2008.