The feeders are full but the food isn’t going down. Just where have all the birds gone? Well, many in my garden have been hiding in my hedge over the weekend. You can see the brave species that have appeared out in the open in my bird count table below. Mm… it is eerily quiet out there at the moment. 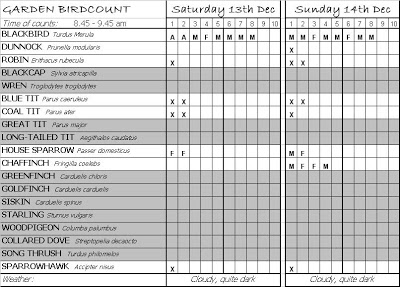 The species listed above have all been seen in my garden. Click on table to enlarge. Key: A= Partial Albino, M= Male, F= Female, X=1

Six minutes into my birds counts on both days saw a Sparrowhawk fly through quite low in and out closely past the feeders using the same route. On Saturday it came back just seven minutes later and as a result it was a further 40 minutes before I saw any bird even peeping through my hedge! So if you have an absence of birds in your garden at the moment I would consider what predators are likely to be scaring them off.

Today after the first visit I decided to put out my video camera out on a tripod to see if I could catch the Sparrowhawk fly by. Win, win I thought. With the camera out the Sparrowhawk probably wouldn’t come and the birds would be safe. If it did return there was a high chance I’d catch it on film. This was interesting. No, I didn’t get it on film but it did eventually make a return visit.

Sparrowhawk heard birds chattering nervously in hedge during January this year. I wonder if visits are more frequent in winter months.

After I was outside putting my camera out it appeared that the birds felt safer and more came to the feeders albeit still a very small number. Yesterday they would come out one at a time to the feeders and take the smallest amount of food before returning quickly to the safety of the hedge once more. As numbers slowly increased this morning I thought my presence out in the garden must have deterred the plan of the Sparrowhawk. Perhaps it did but 40 minutes after its first visit today the birds went quickly for cover yet again.

I didn’t see where it was but watched curiously as a blue tit stayed so still on a tree branch near a feeder. Very slowly it moved its head to look around and then quick as a flash it flew into the hedge too. No birds returned for the rest of my count which told me that although I hadn’t seen it there had been a Sparrowhawk somewhere close by. I then considered that I had filled up the feeders on Friday morning so it is likely that there were visits then too.

So, no more sightings of the Long-tailed tit at the moment! I wonder if they are still around my area. Siskins too had returned to my garden and goldfinch numbers were increasing too. I wonder where they have all gone – another garden close by? Hopefully, as the numbers have birds have dramatically decreased in my garden then the chance of catching any will be reduced too and the Sparrowhawks will go looking elsewhere! I do hope so as I was hoping we would see the return of Blackcaps at the end of the month.

The photo of the female chaffinch hiding in the hedge was taken in August 2007.