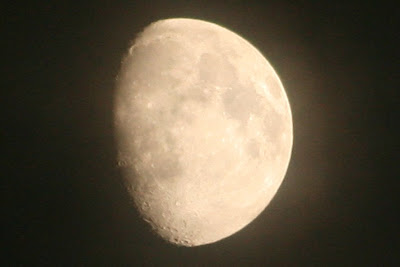 Out by the light of the moon went I this evening armed with a pair of secateures. My mission was to prune my wisteria back to four buds per stem. However, neither the outside lighting nor the moon shining above my plant offered enough light to do the job properly. As I looked up at the moon I thought I’d attempt a photo. I was thrilled to be able to see details of craters on the surface! I was also thrilled to finally be able to upload photos on to my PC again.

Looking at a few stems of my wisteria in the photo below you can see some young growth (green stems) from this year. I intend cutting them completely out. These have been the long ‘whippy’ growth that should be cut back during mid/late summer. Flowers won’t grow from the buds trying to form on them. This pruning is already overdue so this really must be a job for tomorrow. 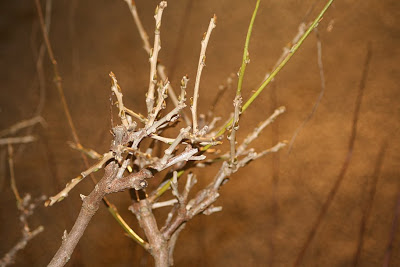 Walking around the garden in the dark is a whole different experience. How quiet it was. Walking past the hanging peanut feeder that the Long-tailed tits discovered a week ago I remembered the noisy starlings of this morning! Yes, they were at the peanuts too but it was the half log that I had nailed to my pergola post that they were making all the noise at. What could possible interest them there? Peanut butter was spread into the hole I had cut into it and boy was it popular!

Peanut butter was what I had hoped to lure the Long-tailed tits back to my garden with. I haven’t seen them go near it so far and now there is none left anyway except in the dish of another caged hanging feeder for live foods. This dish the starlings cannot get at! I had seen peanut butter used at the Nature Reserve I had seen the Pine Martens at. They put some in the knot of a tree and woodpeckers and other birds enjoyed it there too. I was told that it was better to buy peanut butter from health food shops as the salt content would be lower. I bought a tub sold at the Reserve. 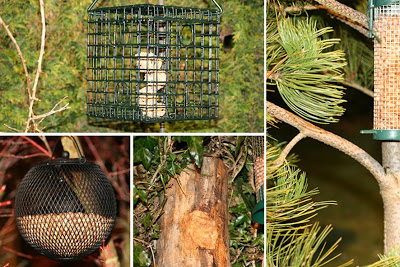 Fat balls are definitely popular with the Long-tailed tits and they have been using the square caged feeder that only the smaller birds can get in. Tehy are also enjoying the peanuts. Yes, I am delighted to say that we have spotted more visits! Yesterday I saw a flock of six visit. They are so quick though, in and out of the garden in less than five minutes. I tend to position feeders with a spot for the birds to jump down from. You can see branches in the montage above that are used by the birds. You can also see one of the holes in my hedge where the birds pop out and in from.

No new photos of the Long-tailed tits that are visiting at the moment. I would love to catch them with my camera yet. The photo on the left above was taken back in March. The fuzzier image on the right is a screen grab taken from video footage taken last Friday at midday. Yes… I am thrilled to say I managed to catch them on film. I have slowed the speed down a little so you can see them a little clearer. Once again, I am so grateful to be able to view and upload them on my PC again.

My OH has been an absolute star with all the hours he has put in to get our PC working again. I will not go into all the tech stuff but in the end he had to rebuild it completely from scratch again – we didn’t even have an operating system. It is tricky now remembering settings I used for specific programs so things are taking longer to do for the moment.

Going from the seriously technical stuff to the pre photos era I found myself picking up a pencil and trying to draw the character of our newest visitors. For ID’s of birds I do feel photos are much better than illustrations but unless you are a gifted photographer they capture only an image of that moment. 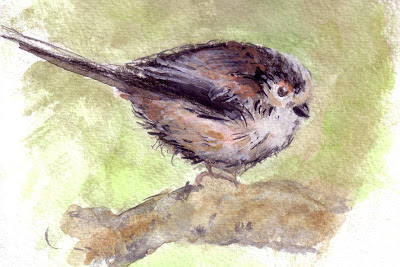 It has been quite a long time since I have done any drawing. I was keeping my OH Company and thought I would just potter away. I so wish I had never lost ‘my hand’. I had chosen to work with graphics and at that time there became less time for simple sketches and drawings. I didn’t do colour much either – I liked to work in black and white with toned washes. I used a watercolour pad for my drawing so I could add any washes if I got that far.

Time passed and my OH still struggled on. I looked out a box of watercolours that I had never used. I pottered some more. I really did not expect anything finished out of my pottering. I had images from my books in front of me but was thinking about the character that I liked about this bird. Time passed, I added more colour. I began to overwork it – always a tricky balance. It was late, we were both tired. I left the pad out on a table to dry.

My drawing had turned into a coloured image which was quite unexpected for me. I have never painted a bird before either. I then considered that I could share it on my blog to show that we can still capture images of moments in the garden without the use of technology. My image is far from perfect but that really doesn’t matter as it is my image of this bird as I have been seeing it in my garden. I do believe that everyone can produce ‘something’ on paper and I hope that by showing my effort I might encourage others to give it a try. I might try it again too.

14 thoughts on “Moonlight, wisteria and watercolours”