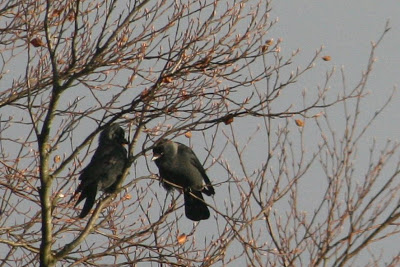 As 2008 comes to a close I wonder what you will see in and around your gardens in 2009. This past year I have found myself enjoying more aspects of birds and wildlife than I expected. Highlights? Mm… tricky. Favourite visit of the year has to be Pensthorpe for the birds, butterflies & damselflies – not forgetting the Piet Oudolf Garden! Mm… on second thoughts that has to share top spot with sitting in the dark at a Nature Reserve Centre with 20 others waiting to get a glimpse of the Pine Marten which I was thrilled to see!

Long-tailed tits (seen again this past week) take the top spot for bird visitor to the garden for me and the hedgehog continued to delight both me and my blog visitors – especially those from outside the UK. I wonder if we will get a female nesting in ‘Hedgehog Manor’ in 2009. I also wonder if we will finally see a successful brood of blue tits fledge our camera nestbox. Mm… but this year is not quite finished yet!

Bulbs, especially crocus have been the plant group that I have found myself warming to this year. Snowdrops I will go a-looking for again during the Snowdrop Festival here in Scotland during February and March. I have also planted more crocus bulbs in my lawn – although there are still some to plant yet! Tulip bulbs still in my shed will now be potted up into pots and placed in my greenhouse for planting in the spring – its fun to do them that way too.

Ah… but the most fun I have with my blog is taking, editing and sharing videos of the plants, birds and wildlife. I have been unwell since Christmas so I’ve had to sit on some new and final footage from 2008 which I’d now like to share. The first piece below was a most unexpected capture – a pair of Jackdaws in a tree.

Isn’t that sweet? But let’s take a look at some photos…

A bit further perhaps, this pair are on the right… 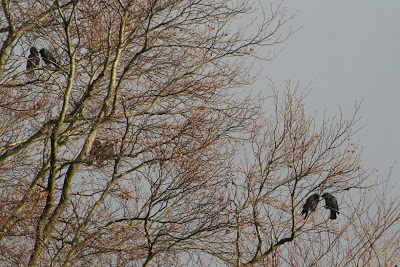 They were not alone… 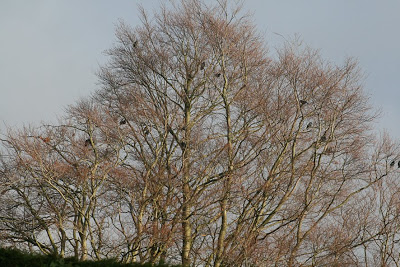 The count looks like eight pairs with two singles and there were even more! I have to say this was a most unusual sighting from my garden. I have never seen such a large flock of Jackdaws flying over it. Actually I have never seen more than a couple! I firstly assumed they were rooks as they can be seen passing over and using this tree – but not in this number either. The grey colouring told me they were Jackdaws. Flocks can be seen in huge numbers in the evenings to roost but not in this tree and definitely not at 1pm.

But look… remember the tree above in a very hard frost. My cheap and cheerful video camera managed to zoom in on these birds from inside my lounge window when I spotted them land on the tree. Ah… I do like a bit of technology! This tree has to be about 200 yds away too.

No technology is really needed for counting the birds that visit our gardens. A piece of paper and a pen will do. Perhaps you might like to count the species you see when outside the garden too. Some bloggers have been busy counting for the Quicksilver Christmas Challenge and will be posting this weekend. My contribution will be minimal as I haven’t been out and about except for one brief visit to my favourite Scottish Wildlife Reserve.

Our visit was later on in the afternoon and the light was going down. We were the only visitors and the outside lighting was on just as it had been to see the pine martens. We were told that at this time of night the Treecreeper could be seen at one of the feeders which are attached to the trees. One tree had come down in strong winds but fortunately missed the centre! We didn’t need to wait long and up and along the Treecreeper went. Gosh it was as fast and tricky to follow in the half dark. Once you spotted its white underside though it was much easier to spot. I slowed the end clip right down.

Back to spotting what visits our gardens and the RSPB BIG GARDEN BIRDWATCH 09 on 24th-25 January. I wonder how many tree creepers will be spotted. I know one garden that enjoys visits from them. The Treecreeper isn’t on the suggested list but you can still add it to your tally if you see it.

You can start practising for your count now too if you want by printing off the counting sheet. You may well find during different parts of the day you will see more or less birds. If you browse the website you will get tips on how to do this and how to take part. I do know that by offering varied foods in the feeders you will get a bigger variety of birds coming into the garden. Oh yes… and Congrats to the RSPB as 2009 sees the 30th count! 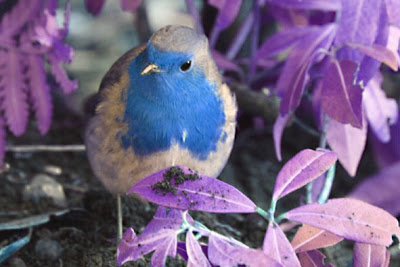 Okay, so why the photo above? You’ll not see a robin like this in your garden. Well, this was just a gimmick photo to promote the Birdwatch last year. I wonder though, if you have ever seen a purple squirrel. Yes, not ordinary grey not the rarer red but a peculiar purple squirrel. I just had to share this link passed on from ShySongbird. I initially thought it was a tampered photo but it really appears to be in school uniform – at least until it moults! Paint is suspected and is probably quite likely.

This year we had white footprints around our garden and I had originally suspected a cat had walked in white paint and never posted on it. Then one night I saw a new trail of footprints and considered that based on the route, like the trail disappearing under my shed, it had to be from a hedgehog! I wonder how many more wildlife sightings via paint incidents have been seen around gardens.

Sorry, this is a particularly chatty post. I’ve had a throat virus thing going on and have had difficulty chatting in the ‘real world’ and I am making up for that tonight now that I am feeling a little better. You really wouldn’t want a narrated video from me at the moment! 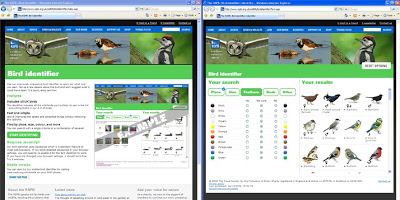 This morning when I began looking at this post I went searching for links on the RSPB BIRDWATCH and discovered some fun features on their site like the interactive bird identifier. It uses Javascript. The site says: “If you have disabled Javascript in your browser settings, you will need to re-enable it for the bird identifier to work. If you have not changed your browser settings, it should work fine. Try it and see.” I tried as you can see in the image above and a fine image I got two!

The image above is not a montage this time it is a screen grab from my new widescreen monitor and what a new experience in blogging terms, photo work and searches this will be! I’ll be able to have two blogs up at the same time for adding and answering comments – ever so handy when you’re on the chatty side like me! Thanks go to my OH for his love of technology on this one – his Christmas parcel to me this year. He keeps asking me… Yes, I love it!

Okay, I am almost chatted out now and I do wonder how many have read to the end on this one! There lies a few questions too. I have added a poll on the top of my right column if you would like to take a look. This is a particularly long post but I do wonder what works best for you when browsing blogs. Perhaps if the subject is interesting to you it doesn’t matter how long the posting is. I would be interested to hear what you think. You can make more than one selection if you’d like. I see now that some votes have come in I have a problem with the background colour. I’ll look into that.

Well it hadn’t to happen didn’t it? Many of my postings do go past midnight and I have been known to alter the time slightly but tonight it is probably fitting that I just post real time – after all I am now into the last day of 2008!

“HAPPY HOGMANAY” and all my very best wishes for 2009!

The photos and video shown above were taken on December 27th 2007.