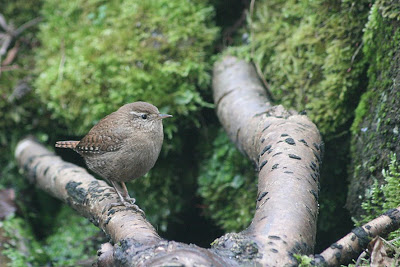 No, not my age but my count from the garden for “the number of different species seen or heard in the wild, in Britain, between 00.00 on 25th December (i.e. midnight on Christmas Eve) and 24.00 on 1st January (i.e midnight at the end of New Year’s Day). Escapes, cagebirds, birds in a zoo, the Christmas turkey do not count – everything else does” as challenged by Border Reiver at Quicksilverbirds. Mm… I missed the part about being heard although my experience in identifying a bird by its call is seriously minimal! However, I was delighted that the wren made an appearance in the time slot and again today.

The tiny Wren’s appearance around my pond this morning has given a wonderful start for bird photos from my garden in 2009! I know they aren’t as sharp as they could have been. My camera had been on my tripod and I had been experimenting with a faster ISO setting (1600) as it was dark in this area earlier on and when the wren came along I forgot to change it I just started snapping. All the photos below were taken through my window. The wren was so fast that to be completely honest when I finished taking my photos I actually felt a little dizzy! Oh… but even though they aren’t the best shots I am thrilled with them as they completely show the wonderful hide and seek character of this delightful little bird. It hides from us and it seeks out the insects around the waters edge of the pond. Sorry… I was posting on my bird species count. Okay, in my garden I saw: Flying over the garden Herring gulls, Rooks and Pink footed geese were seen. We also saw one of the biggest flocks of Jackdaws I have ever seen (25-30) and one also made it into the garden staking out the peanut feeders! So the ‘from the garden’ count ended at 21.

I haven’t been out and about much over the Christmas period but one trip out saw a Buzzard on a tree over looking a busy road and large flocks of both Pink footed and Graylag geese were seen in fields with smaller flocks of pheasants in other fields more into the countryside. Not sure if we saw partridges too so won’t count them. So ‘out of the garden’ my brief trip took in 4 more species just by looking out the car window. Final tally for my contribution to the Quicksilver Christmas Challenge is 25. Now this number is a fraction of the 90 that Border counted but as he said in his posting it really is the taking part that counts! To see other results (or add your own) go to the link above. I am more than happy with my count as I really am in no way what you’d call a birder and I’ll be completely honest and say that pre-blog I probably could only have identified only half the birds in my count and probably missed seeing some completely. Now… that is a result! 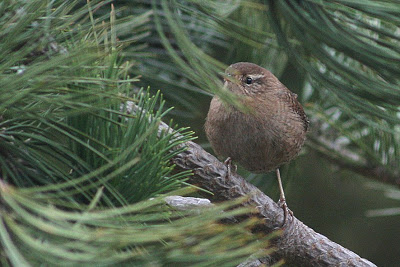 P.S. Border has just left me a comment suggesting that if anyone who visits/comments here wishes to send him a submission, from anywhere in the World, he’d be glad to add these to the report. The more the merrier! I know I have recently discovered some new bird and nature blogs perhaps they might like to join in too. You can leave a comment on this posting. I have to be honest and say I love to read the lists and see photos of birds from outside the UK too. Sorry… perhaps I should have extended this invitation to you all earlier. Oops.

The photos above were taken in my garden on January 2nd 2009.