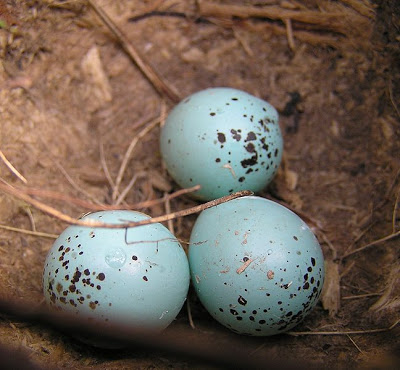 … Spring bulbs and garden birds. It is great to see the bulbs starting making their way through the surface of the soil – or lawn in my case. It’s also great to see a bird species return to the garden once again. I wonder if you can tell which one by the eggs below. The image below is not from my garden but courtesy of Wikipedia. Perhaps you might get a clue if you look closely at the patterns of the speckles.

A few days ago I was thrilled to see the return of the Song Thrush. It’s been a while since we’ve seen it. Spotted on the ground in the area where I scatter sultanas, it was seen waiting for the blackbirds to scuttle off before it ran in to feed on the sultanas that were left.

Once it left I opened the window and threw some more sultanas out on the ground. I don’t know what it is about this bird but I do find its visits rather special. Yes, they are rated on the red list by the RSPB but that’s not just why I like to see them. Perhaps it’s because they are shy and almost polite in their visits. Or perhaps it is the upside down heart pattern on their bodies and the fact that each bird appears to have a slightly different pattern making it unique. 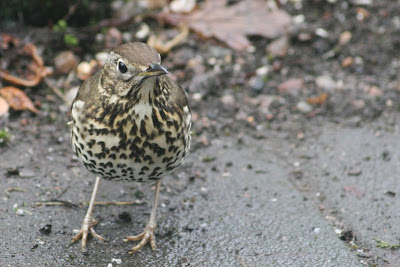 The Song Thrush has been seen on two mornings. Although it was a dull morning when the photo above was captured I am still delighted with it. It is a pretty bird isn’t it – fit to brighten any dull morning! I love the way it almost bounces along the ground – much more sedate than the blackbirds that jump along. Perhaps it is its shy behaviour that I like – again quite different from the speed and confident moves that the blackbirds make.

Thrushes often stand with their head tilted to one side when they are searching for food and picking it up as you can see with the sultnana in the photo above. They clearly have strong neck muscles by the force they use to break the shells of snails to get them out. Unfortunately for them after the effort of smashing the shell on a rock it doesn’t necessarily mean they always get the snail inside! Blackbirds are often not far away and will very quickly run in and take the snail before the Thrush gets near it. I guess that’s the way out in the wild – there’s always someone watching where you find food. It’s all about survival. 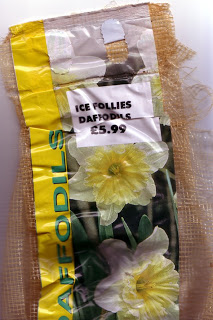 Plants are no different – they just want to grow even when out of soil like the bulbs that have been sitting in their bags in my shed. Oops… some still are! Okay… but I did get a few planted today before the winter cold and snowfall expected. In fact, it was quite a pleasant morning in the garden today. No sunshine but no cold winds as expected either which was a huge bonus!

Yes… today was the first of February and I was out planting daffodils! Okay… the back of this pack did say ‘plant between July and December’ so this perhaps will be a test case to see exactly how late they can be planted. I bought these bulbs a couple of weekends ago at an absolute steal.

Yep… three bags at 50p each they really owe me nothing but I’m still very positively looking for a great (albeit later) show of flowers! The garden centre clearly needed to get rid of this stock of bulbs as the buds were already breaking through. Healthy bulbs are firm, which these were, so I have no reason to assume that they won’t flower in their own time. The only problem was where to put them – being small my garden doesn’t have too many free spaces! 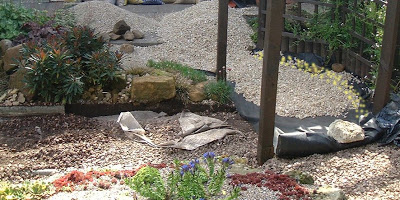 After a bit of thought I decided to plant some in a pot and some in a couple of pond baskets filled with soil and dropped in a border (with a gravel mulch) next to my Arbour. I’m thinking about changing this border this year so this will safeguard the bulbs as the baskets can be lifted later. However the main planting I wanted to make a feature with.

An avenue through one side of my walkway seemed the way to go. The yellow dots in the photo above show where I planted them. This photo was taken when this gravel path was put down back in August 2000. You can see the breathable membrane put down to stop weeds coming through. Today, I had to rake back the gravel, make a trench (cutting back the membrane as required) add some fresh garden soil, plant the bulbs, cover them with some more soil then rake back the gravel again – job done!

There were a number of varieties available when I bought these bulbs but I choose only the one. Hands up… I’m not too fond of yellow in the garden. I don’t mind the small tete a tete daffodils but when it comes to full size blooms I don’t go for the traditional bright yellows. Ice follies were pale with a primrose yellow centre – they would suit me just fine. Ah… but after looking up this variety on the internet I am even more chuffed with it!

It appears that this is an excellent variety for naturalizing. Also, the whole flower gradually fades to white – now that’s my kind of flower. Oh yes… and its one of the most vigorous and longest flowering of all the large cupped Narcissus. Now there’s a result I’d say. Okay… so I’d like to give Ice follies a warm winter welcome to my garden!

Oh… I have a few other bulbs I’d like to welcome too – the tulips and alliums still in bags in my shed! These I’m going to pot-up and put in my greenhouse – on the to-do-list for this week. I wonder what’s on your garden to-do-list for the coming week. Perhaps if you have a snow covered garden it will be planning for the year ahead and keeping the feeders topped up for the birds. The birds will definitely welcome food and fresh water at this time of year. I hope we see the Song Thrush visit again – I’d better get more sultanas in!

The Song Thrush photos above were taken in my garden on January 30th 2009.

23 thoughts on “A winter welcome to…”