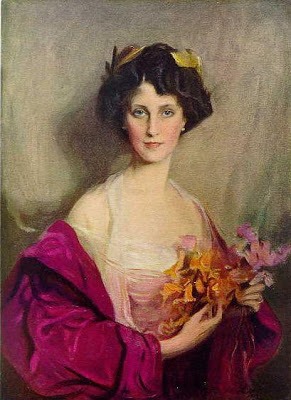 Before listing the results of my Big Garden Birdwatch taken at the weekend I’d like to take a moment to introduce the RSPB to visitors outside the UK. The Royal Society for the Protection of Birds is a registered charity. In 1904, only 15 years after being founded, it was granted its Royal Charter.

Okay, I should perhaps say that I’m not really a history buff. However, on looking through their website for info on what they are currently working on my attention was drawn instead to why the RSPB was formed. I am guessing many others in the UK may find this interesting too.

The first president of the RSPB was the 6th Duchess of Portland shown in the painting above in 1912 (image courtesy of Wikipedia). You might wonder why when you look closely at the plumes in her hat. However, she and many other people wearing plumes at that time were its strongest supporters.

On reading from the RSPB website: “In its earliest days the Society consisted entirely of women who were moved by the emotional appeal of the plight of young birds left to starve in the nest after their parents had been shot for their plumes.” After watching the plight of blue tit parents to feed their young in my camera nestbox I can completely understand the driving force behind this.

The society had simple rules: “That Members shall discourage the wanton destruction of Birds, and interest themselves generally in their protection” and “That Lady-Members shall refrain from wearing the feathers of any bird not killed for purposes of food, the ostrich only excepted.”

During the late Victorian era (1871-1901) the plumes of thousands of egrets, birds of paradise and other species were being used in women’s hats – fashionable at the time. Previous to this native birds used for their plumes resulted in The Sea Birds (1869) and The Wild Birds (1880) Protection Acts. However: “the trigger which led to the foundation of the Society for the Protection of Birds in 1889 was the continued wearing of ever more exotic plumes.” 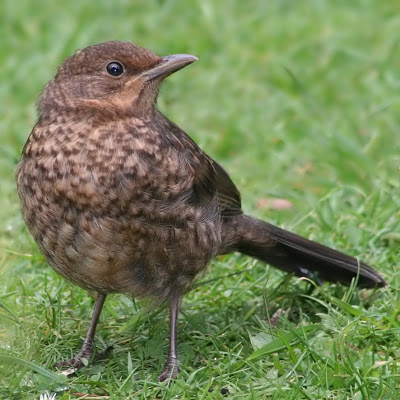 Today: “The RSPB speaks out for birds and wildlife, tackling the problems that threaten our environment.” They rely upon memberships and donations to fund their work. I could list many stats but as there is so much info on their website I would suggest you might enjoy browsing it yourself. I’ll just settle for a couple of points that caught my eye tonight. The first is that the RSPB has at least nine volunteers for every paid member of staff. I’d say that is pretty impressive!

The RSPB continues to say: “It’s really easy to join this scheme and help raise valuable funds for the RSPB. Just log on to the recycling appeal website and order your freepost envelopes. Once you have completed your contact details on the envelope, enclose your old inkjet cartridges and mobile phones and post to the RSPB recycling appeal.”

Okay… now to my Birdwatch results. Unexpected changes to plans meant that my count wasn’t at the time of day I would have liked. Never mind, I did do it and I will submit my results this week. My count was taken on Sunday between 9:30 and 10:30am. I didn’t have a particularly big show despite not seeing the female Sparrowhawk regularly hunting in the garden. There were ten species and a total of twenty-six birds. The photo montage below represents my count. 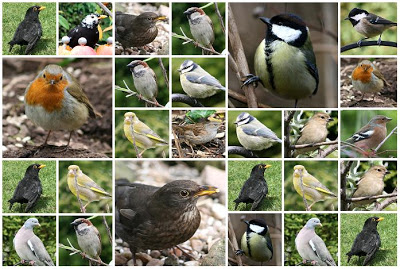 Blackbirds topped my count with seven. Three Chaffinches, Greenfinches and House Sparrows were seen. Two Great tits, Blue tits, Robins and Woodpigeons plus one Coal tit and one Dunnock bringing my count for 2009 complete. Despite this count being really quite low it is still of great value to the RSPB in their survey.

So that’s it for another year. The results are out in March and I will add a link here then. I will be particularly interested in numbers of Blue Tits this year after 2008 saw for the second year running a brood of eight chicks all die in our nestbox. Our boxes weren’t the only ones to fail either from comments and emails. I don’t know how these parent birds will adjust to shortages of caterpillars and other insects when they need them to feed their young. It appears that the trigger to start the whole nesting process is not the days getting warmer but daylight levels increasing. During my count I did see a pair of Blue tits at our Arch nestbox and we have activity (including a rooster) in our Camera box now too. I’ll update on that shortly.

Finally, I have to say I have been completely overwhelmed by the response my last posting on Desert Island Plants has had! What a buzz around the garden blogs there was that day and a good time was had by all. I’d like to thank everyone who joined in and visited then and since. It really goes to show, just like everyone counting birds on The Big Garden Birdwatch, how our interests can connect us all. Just brilliant!

The photo of the Duchess of Portland was taken from Wikipedia see licensing details here. The montage photos were taken at various times of the year in my garden. The young blackbird was taken on May 19th 2007 in my garden.

22 thoughts on “The RSPB & Birdwatch Results”