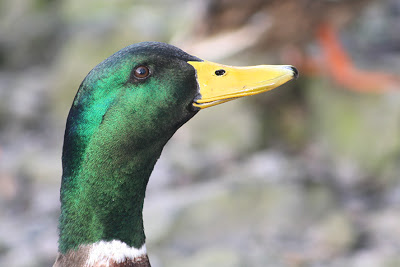 Oh my… what beautiful brown eyes. Em… no this wasn’t one of the many gatecrasher/eavesdroppers at Saturday’s very successful Dinner Party. Nor was this handsome chap a guest/gatecrasher at the very busy bird feeders in my garden on Sunday morning either!

The early hours of Sunday morning saw another brief sprinkling of snow. It was bitterly cold outside as I topped up the feeders just after 7.30am. I broke the ice in my pond to give the birds some water to drink then headed in for a hot cup of tea! With breakfast, I sat at the window watching ‘Bird TV’. It was to be a ‘Mystery’ this morning!

Tension was building on the ground as birds fought unnecessarily for food. I was busy at the PC now catching up on the gossip from the night before. Catching my eye outside were the blackbirds as they all quickly left the ground. I watched a moment. It didn’t look like a Sparrowhawk visit. The birds didn’t leave the garden – they just stepped back from the feeders and were now on tree branches, shrubs, fences etc. My eyes followed one Blackbird all the way up to a branch on my neighbour’s cherry tree just on the other side of my hedge.

The Blackbird looked up the tree. I looked up the tree. Some chaffinches landed on the higher tree branches. But wait a minute what is that in the middle of the tree? I watched this mystery bird. The Blackbird stayed on its lower branch and watched this mystery bird. The chaffinches briefly considered moving but stayed watching too. We had a situation now! I looked through my very simple, dirt cheap, binoculars. This bird looked bigger than the Blackbird. The Blackbird was still watching it! It was almost like there was some sort of respect thing going on here. If you click on this or any other image in this posting it will enlarge. 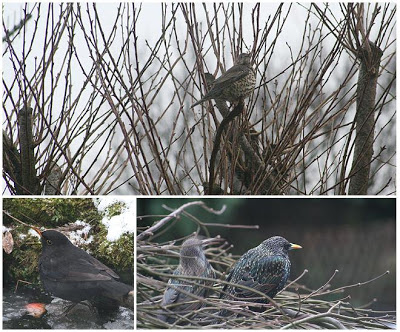 The books came down from the shelf. What was this? My camera was sitting on my tripod so I took a few snaps. The bird remained. The light wasn’t good so I knew the images wouldn’t be either. The mystery bird slowly turned its head looking around. I looked up the books.

My first thought was a cuckoo as I’d never seen one. But no, this wasn’t likely at this time of year! The bird looked quite plump and grey and had spotted markings on its front. A thrush was my next thought but felt it not likely with this bird being so bold sitting up there. Oh…wait a minute I could set up my video camera and get a closer view of it. Aw… off it went!

Could it be a Mistle Thrush? I had never seen one of these either. An internet search came up with some rather nice images with slim necks and small looking heads. That didn’t seem to be the bird then! Ah… but wait a minute these were from photographers. Looking through the less pretty pics, dark and unsharp like mine, I found a similar looking bird. Back to the books again.

Ah yes… with the description of ‘pale edges to dark wing feathers, a grey brown back and a bold dark eye in a plain face’ it looked like I had a match. Confirmation came when I looked up the size of this bird compared to the blackbird. The Mistle Thrush has a length of 27cm where the Blackbird is 24-25cm. So there’s about an inch between them. Yep… that looked about right. Oh… but what about this “A large, bold, aggressive thrush, the Mistle Thrush is by far the largest of the ‘spotted’ thrushes”. Yep… I guess that’s why the other birds were watching it!

Starlings were probably being watched by the other birds too as they started arriving in groups taking over the feeders as they do. They have found the little feeder in my Acer tree and some seemed to negotiate through its branches easier than others! With the ice broken in the pond I also watched Robins and Blackbirds come down for a drink. 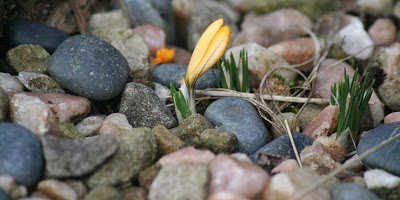 Getting ready for a trip out later during the morning just look what I spotted. Our first crocus is out! My front garden gets a little more sunshine than the back so I guess that’s what’s helped this one on. I had been regularly watching out for the ones planted in the lawn to show signs of buds like many, many other gardeners. Oh… well that would be the ones that can see the ground through snow!

Perth shopping trip over, we headed from the town across the bridge to a small water edge along the River Tay to see the water birds there. I had packed my camera! I wanted some shots for my birdphotos blog which I’d like to post on more regularly this year. My daughter had packed a bag of bread and that’s what the Mallard in the first photo was waiting for! I stood closer to the edge than usual which didn’t bother the Mallards but many of the Goosanders were a bit wary of us being so close. The female Goosander below was keeping one eye on both me and the bread! 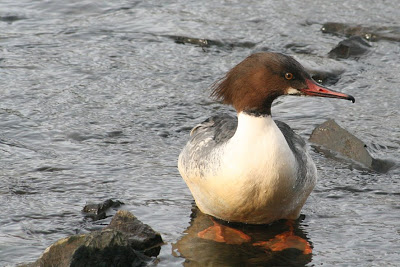 Further along the path we stood behind the high stone wall looking down on the river. There were no ducks at this strip but that didn’t last for long! Once my daughter started throwing her bits of bread there was soon a feeding frenzy below. Swans could be seen in the distance but gulls were now taking an interest as the Mallards and Goosanders splashed about below. This female Goosander below doesn’t look quite serene and uninterested now! 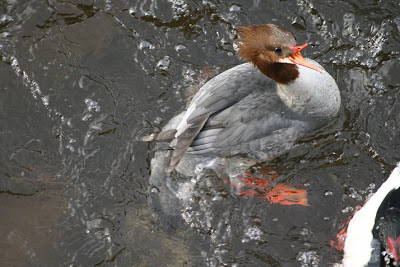 My daughter started throwing bread up into the air now to see if the gulls could catch it in flight. Oh yes… and she challenged me to get some photos of it! Yeh right… just what are the chances of that. Well, would you believe it I actually did! Of course I didn’t know that at the time and I took many, many photos. So once again we come to the challenge of the day – just who were we watching? Okay… I don’t know my gulls so it was out with the books again when we got home.

Black-headed gulls you would expect to have – black heads. Looking at my book it appears that its black head is in fact a brown hood which is only seen in the summer. The red beak you can see has a black tip and there seems to be a black spot to the side of the eye. This spot is a dark ear spot. So both birds below are Black-headed gulls. However, the one at the bottom in both shots has markings on its wings and a dark tail tip which makes an ‘immature’ and in its first winter. Gosh… so many looks to remember and from what I’ve read there’s breeding plumage to consider too. 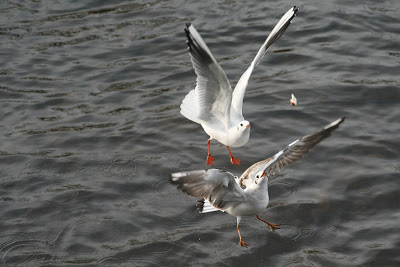 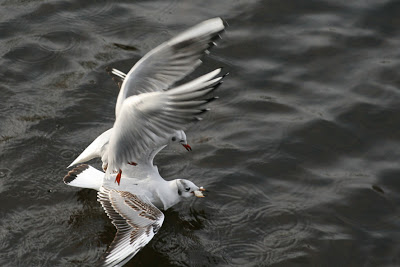 The sun was trying to come out and the Swans finally made it along to our strip of water – when the bread was finished. They preened as they went and it didn’t look like they were fussy for it anyway. Gosh… how they could stretch their necks. We stretched our legs in quite a different manner and then headed home. 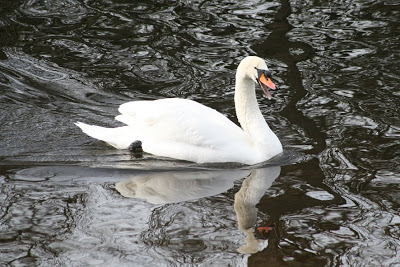 Once home, I made one more brief trip – into the garden to see if my snowdrops could be making there way through the ground. I have never been successful growing them in the past. Hey look… it looks like I’ve a couple of flowers! Excellent – now I’m in the mood for visiting some of the gardens taking part in the Snowdrop Festival which runs from 1st February to 16th March here in Scotland. Remember last year I went to Dalmeny at South Queensferry just outside Edinburgh? What a wonderful sight that was – its going to be hard to beat that one! 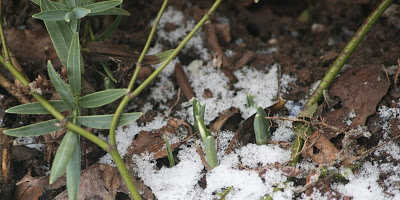 So many wonderful moments and images from the weekend! One of my favourite garden ones just has to be the one below of the leaves from my drumstick primulas which I disvoered after the snowdrops. They almost look alien! Although I’m not in a hurry for Spring this definitely signals it is underway, albeit under snow. 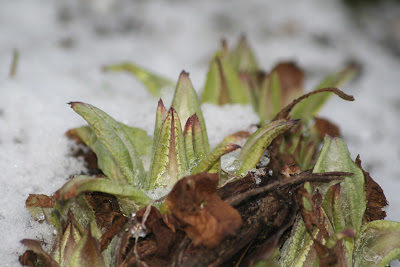 Last night we had another light covering of snow. Today has been another day, as they say, and this morning revealed yet another garden mystery! As I put food out for the birds I noticed some marks in the snow. Yes, that is my footprint in the larger photo below but to the right of it you will see four long lines. Just what made these? 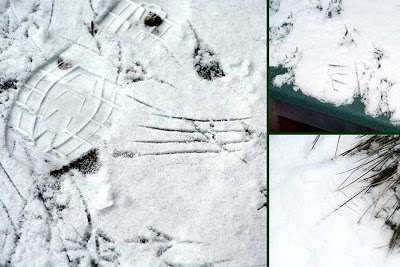 I spotted them in a few places including the roof of Hedgehog Manor. Based on the sightings like under the ornamental grass too I’d guess a squirrel but I doubt it could make these marks. I’ll just have to keep watching to see who else is visiting my garden.

All the photos above were taken on Febraury 9th 2009, some in my garden and the others in Perth along the River Tay.