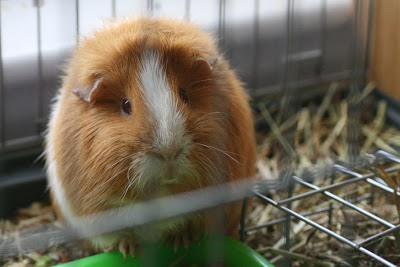 … and not garden watching either! We have been kept occupied ‘hutch’ watching and I’m not talking about Hedgehog Manor this time. It has been fascinating stuff. Now, I wonder if you can guess what we have been watching. We have good news and bad news. Let’s get the bad, the sad news, out of the way first.

Do you remember this little lady above who was admired in my January GBBD posting? My daughter got two guinea pigs for her 14th Birthday. Sadly just a few days after my daughter’s 16th Birthday, Elisa shown above, died. It appears that guinea pigs hide ill health very well as they have so many predators in the wild. We did all we could to help her. 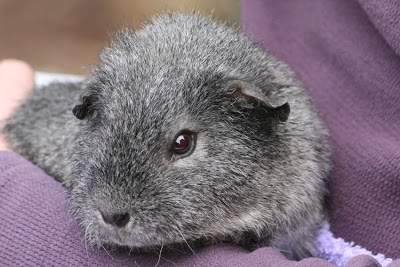 Elisa’s hutch buddy Dora, shown above, was now all on her lonesome. Aw… we waited a week then made a return trip to the pet shop where we bought her and Elisa. This time we were organised with a pet carrier! However, we never considered calling ahead to see if they had any females. Our choice was limited to one but she seemed a friendly and chatty little thing and we were delighted to take her home.

Dora has been a very placid and good natured guinea pig. However, she did take exception to having Izzy, her new hutch buddy, move in without any introductions. We completely got it wrong by expecting her to be okay with sharing her space with a stranger and let’s just say their was enough of an issue to warrant getting the spare hutch down from the attic!

Izzy remained a chatty thing and like Dora enjoyed being handled. We Googled our problem with getting them together and it seems we should have began with a neutral space first. However, there was quite a size difference between them which was a little worry. More research was going to be required here.

Izzy was only 14 weeks old (March 21st) when we got her. We did notice she was a slightly different shape from Dora but thought nothing of it at the start. However, after a conversation at a friend’s house one evening we began to wonder about this now ‘pear shaped’ guinea pig. We Googled images of pregnant guinea pigs and yep… they looked just like Izzy! Now… just how was Dora going to cope with this? What to do next?

A visit to the vet confirmed that we had a very young pregnant guinea pig. As expected we were told to keep Dora and Izzy apart. What we didn’t expect to be told was that Izzy was just days away from having her babies. True to estimate she had them last Thursday morning. She had four, one died and three appear to be fine – although clearly we are no experts in this field.

Hutch watching has been tricky as they hide inside the igloo of the hutch most of the day. Izzy is young herself to be feeding three young and by evening she appears to have had enough! We have been concerned by her agitated behaviour then.

The young guinea pigs were born with hair, eyes open and were able to stumble around walking after a short time too. Just three days on and they are able to build up speed running after and away from Mum. Poor Izzy, she is appears tired as a young Mum. Photographs have been hard to get. I don’t want to use a flash and moments of seeing the young guinea pig babies (who look just like Mum) are still brief. 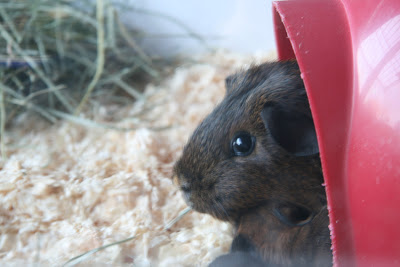 You can see Izzy peeking out her Igloo above. The not-so-sharp photo has been taken through the angled plastic sides of the hutch. So far we have taken few photos of her. If you look closely below her chin you will see the ears of two of her young babies. Sometimes she’ll stay in the entrance and stretch for food. We are guessing she is trying to stop her young getting out! 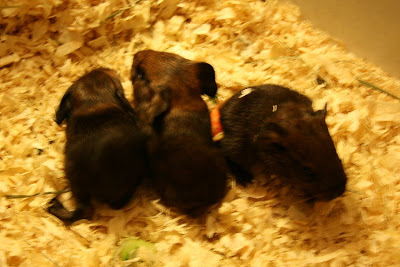 The final photo above is the best I can get of our new arrivals for the moment. It was taken earlier this evening by gently and quickly lifting the Igloo roof up when Izzy was having something to eat. I daren’t use a flash with them. The young are often seen in line and usually all facing the same way too. They are now starting to show an interest in solid foods which should take a little pressure of Izzy soon.

Spare time wise, it’s a good job we don’t have any nest building going on in our nestbox at the moment! However, I have spotted Starlings collecting material from around my ornamental grasses so nesting is underway now. I am wondering if we will only get a rooster in our Camera Nestbox this year. Time will tell.

The photo of the three guinea pig babies shown above was taken on April 12th 2009. The guinea pigs were three days old.

11 thoughts on “Not Easter bunnies…”