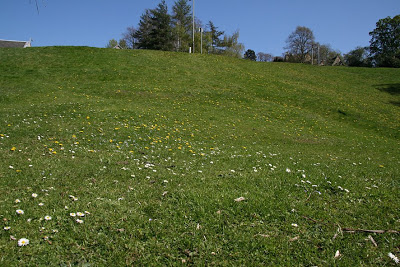 A steep grass banking of daisies, speedwell and dandelions carefully masks the location for our picnic lunch. A closer look at the skyline in the photo below reveals roof tops and road signs. We have left the countryside lanes of our morning visit to Loch of the Lowes and are now in the heart of a city with a busy main road above us. Our location isn’t a actually a secret but I do wonder how many people living in Perth (Scotland) wander down here.

Being honest, I’d say pre blog I didn’t often come down here myself. However now, camera in hand to capture all things wildlife related outside my own garden too, I have found myself popping along here to this strip of the River Tay take photos of the birds. Mallards, Geese, Gulls, Swans and Moorhens I expected to see but I didn’t know about the Goosanders and they soon became a fav to look out for.

We often take some bread and walk through the gate below to the waters edge near Perth Bridge (also known as Smeaton’s Bridge and, more locally, the Old Bridge). However, today we were empty handed as this lunch break hadn’t been planned. How peaceful and beautiful it was this Sunday Lunchtime. The timing of the male mallard gliding through the reflections of the arch circle was quite magical. 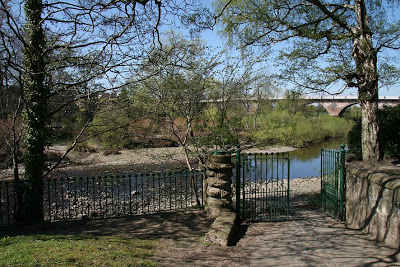 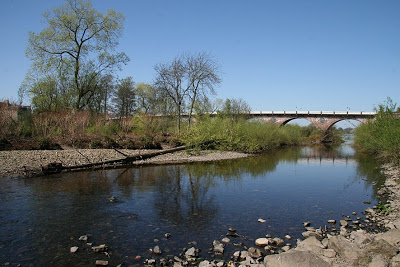 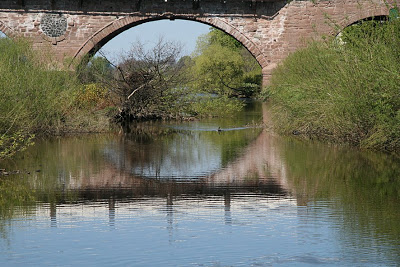 Tiny wild flowers caught my eye growing in the wall as we walked away from the Old Bridge along the higher path towards the Queen’s Bridge. 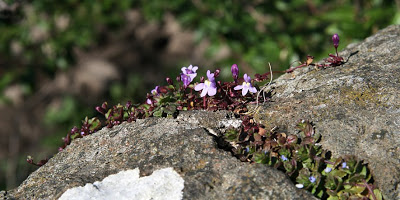 Looking across to the smaller island (The Stanners) which is between the two bridges we could see so much more plant life and gravel than usual. The timing of the tide would be one factor but we really haven’t had much rain this April so I guess the level is also low too. Browsing The Perth City website I found some interesting info on the birds in this strip of water:

“In spring and summer, the area between the bridges is home to Sand Martins which nest in holes in the walls of the riverbank, busily darting around in search of insects.

Grey wagtails can be glimpsed on the riverbank below the bridges. Dippers are small dumpy birds, with a characteristic bobbing movement, commonly seen around the ladeside. Moorhens, with their black bodies and red beaks, rear their young along the river and on the lade in the spring.”

Several species of ducks, geese and swans inhabit the river and its islands. Most conspicuous is the flock of feral geese, which seem to have escaped from captivity and have lived between the bridges since the 1990s. They are related to the true wild Greylag, which is thought to be the ancestor of today’s domestic geese. There are also feral ducks on the Tay at Perth, probably crosses between escaped domestic ducks and true wild Mallards, which are abundant here.

Many ducks nest on Stanner’s Island, or even in gardens along the Dundee Road. Goosanders and Mergansers are large saw-billed ducks which are often glimpsed diving in the area between the bridges. In winter, Goldeneye ducks may be seen diving off Tay Street, and are the inspiration for David Annand’s bronze sculpture adjacent to the Queen’s Bridge. 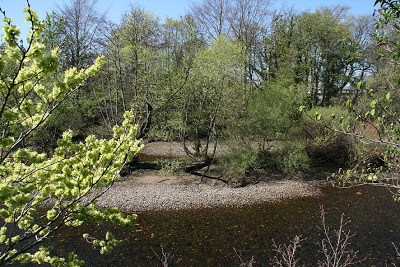 Mute Swans, Black-headed and Herring Gulls I have seen here but it appears that:

Black-headed Gulls and Herring Gulls can often be seen swooping for small fish in the river. Cormorants, large glossy greeny-black birds, are more commonly seen on seashore rocks, but are equally at home fishing on fresh water rivers and lochs. Herons are striking large grey and black water birds, occasionally seen standing motionless in shallow water, particularly around the Tay islands, waiting to stab fish and frogs with their long pointed bills.”

I have seen a Heron here once but fortunately from where I was standing I wouldn’t have been able to see it stab any frogs or fish! Now, I’ll have to watch out for the Gulls fishing next time too. 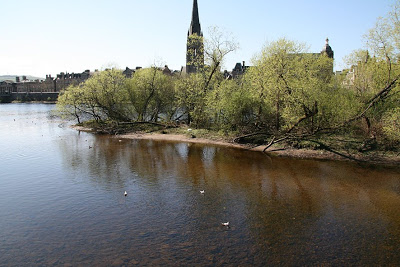 Looking down to the shallow water no fish could be seen this morning (with our eyes anyway) but the River Tay is well known and very popular in the fishing world. I did know this. Salmon is the special catch of the day here but don’t ask me on which strips. However, I did know that the heaviest salmon ever caught (by rod) in Britain was landed by a woman on this river! I had to look up her name though.

Georgina Ballantine caught her 64lb salmon further up the Tay at Caputh Bridge in 1922. Earlier this morning we had crossed that very strip of water although the original bridge has now been replaced. Every time I cross that bridge now I’ll think of Georgina and the faces of any fellow fishermen that day!

Showing a few images of the Riverside Trails here was how this posting started but after a little research I had trouble holding back the tales and felt I should ammend the title! Just one more tale on some wildlife that I hadn’t realised could be seen here. It appears:

“The most striking mammal to be seen here is the Common Seal, usually in winter, pursuing salmon on a high tide. If you are lucky, you may even see an Otter, another mammal which enjoys salmon. In the vaults which cover the Lade, there are Daubenton’s Bats, which roost there during the daytime.”

This posting has certainly got me wanting to know more about the history of this area too. But wait a minute there are plants here and lots more of interest too if you want to visit. You can take a circular walk from here passing through the gardens of Norie-Millar Park then under the Queen’s Bridge passing Rodney Gardens with sculptures by local artists in both.

The Riverside Walk along Bellwood Park (with more sculptures) takes you over the River Tay (and the larger Moncrieffe Island with its allotments and Golf Course ) via the Railway Bridge. Walking down the steps from the railway bridge you can then walk along Tay Street all the way up to the Old Bridge where you can come down to this path again. It’s the gardens that get me to the other side of the Queen’s Bridge but this morning I had other plans for an afternoon walk to quite a different setting once again.

Mm… how about some pics for this too. I took a return visit one lunchtime this week and parked in the Car Park off Dundee road at Bellwood Park. The map below gives you a little idea of scale and layout of this area now. 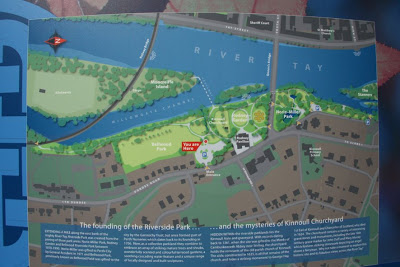 The sculpture below is ‘Millais’ Viewpoint’ by Tim Shutter. More pics and less chat this time… well perhaps just one tale… 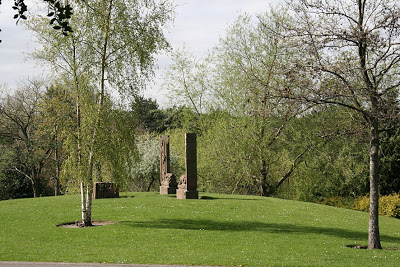 Honest Sir ‘I’ve been framed!!’ Sorry I just couldn’t resist this as the building in the centre of the frame, all the way over the other side of the River Tay, is actually Perth Sheriff Court. Here’s one for a Pub Quiz too… how many Jurors sit in a Scottish Court? Well, not 12 as in England and Wales. Scotland does have many Laws of its own which may surprise people outside the UK. There are 15 Jurors in Scotland as I know from first hand experience… I have been that 15th one! 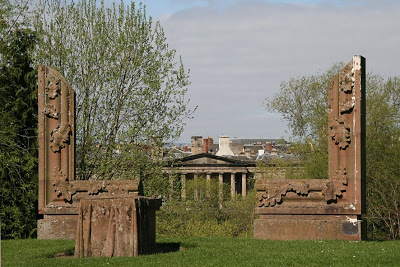 Moving swiftly on… there is a causeway over to Moncrieffe Island near the Rodney Gardens where pergolas and plants are in abundance. The peace messages, in different languages, on a pillar caught my eye and the pale bergenia flowers against a painted wall near a viewpoint across the river. 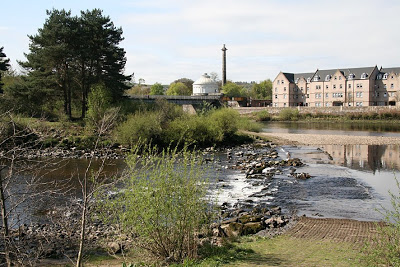 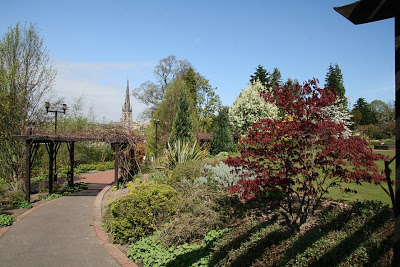 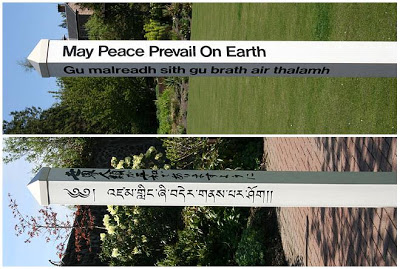 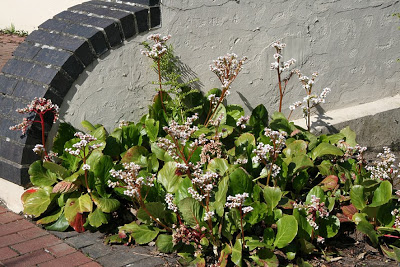 Ah… I hear you say the end is in sight… LOL… well almost! It is Friday after all and the weekend has officially started. The photo below shows the tunnel under the Queen’s Bridge which will take you back to where this posting all began so very long ago. I included it more as a garden point of interest… always having a focal point no matter what way you look in your garden. 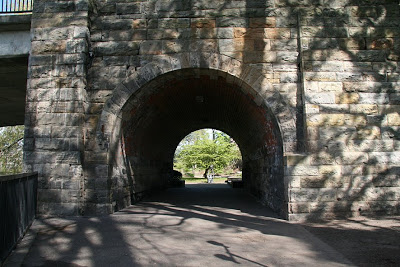 Ah… but let me take you back in time with this tunnel… a treat perhaps for those who will remember this endearing programme on our UK television screens a few or two years ago. I should stress it is the colour version I remember! I should say I didn’t realise this originated in Canada. Here’s a bit of nostalgia and fun for Friday courtesy of YouTube. It has to be…. Tales from the Riverbank!!

Fingers crossed you’ll have great weather and time for exploring your own riverbanks this weekend! I wonder what you will see there. I also hope some local people pop down to this strip of the River Tay. Towns can be as rich as our gardens for birds and wildlife when we know where to look. Have a great weekend 😀

Now… where did I go next on this three centre Sunday? Ah… tales of quite a different kind to come next time…

13 thoughts on “Trails and tales of the riverbank”