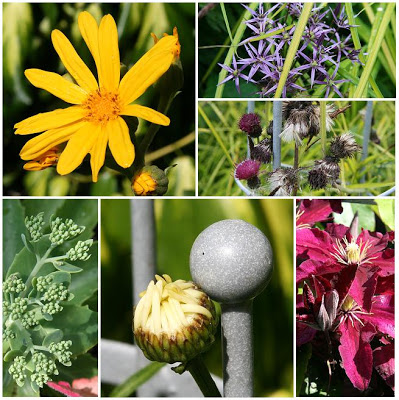 It’s that time of the month again… to show off all the flowers in the garden. Well… actually, yesterday was the day chosen by Carol at May Dreams Gardens to host this celebration of what’s in bloom during the middle of the month.

Purple and deep maroon reds show a richness of colour there that the same plants just cannot give in my baked sunny front garden. The Christophii allium shown above has just opened its flowers where the ones in my front garden are sporting the more sculptural look as dried seed heads already. 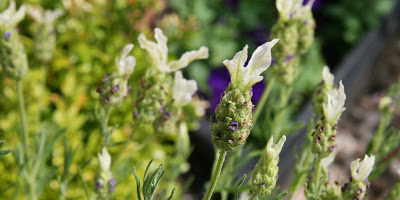 Lavender loves the warmth of my front garden and I am loving this one above in a pot. I will need to look for the label but I’m pretty sure I’ve put it in a pot as there could be doubts about its hardiness. I bought it at a garden centre after seeing bees on it. I’ve bought a few plants like that this year! 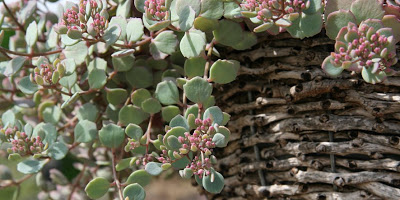 Hanging baskets would require constant watering in my front garden so I have chosen to put a sedum in mine. I have three baskets with one plant per basket… you can see how the basket has been almost bleached by the sun. I like that look.

Sedum‘Rose Carpet’ was the plant I chose for its blue green foliage and rose pink flowers. It is also quite a compact plant for a basket. I just love it and always look forward to the first flowers opening. I over-winter the baskets in my greenhouse as I wouldn’t want to lose these plants. Perhaps this year I’ll try to take some cuttings. It would make a wonderful ground carpet! 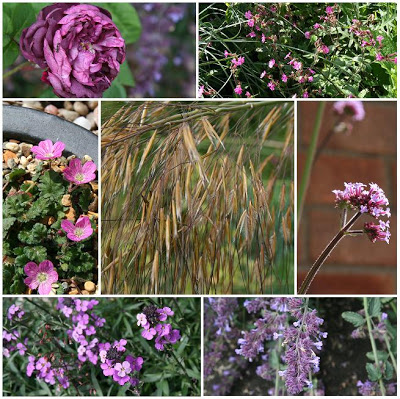 Some plants, like roses, just love the sun and are regularly seen in front gardens here in the UK. Although Red Campion is probably more associated with woodlands than gardens… far less front ones!

This year I moved a number of Red Campion self sown seedlings out there to a space behind my giant oat grass (stipa gigantea) and just as I hoped its wonderful ‘pink’ flowers can be seen through the stems now.

Verbena bonariesis is also towering over a number of plants sitting snugly in its pot in a sunny corner where it will catch the last rays of the evening sun. I’m looking forward to seeing butterflies on these flowers soon although I may need steps to photograph them! 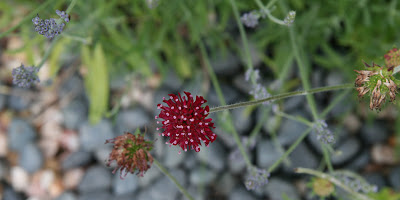 Soon a sea of lavender (three plants full) will be fully in flower… the first ones are just starting to open. The bees will enjoy that just as they have been enjoying the wonderfully deep red pin cushion flowers of the little kniphofia. 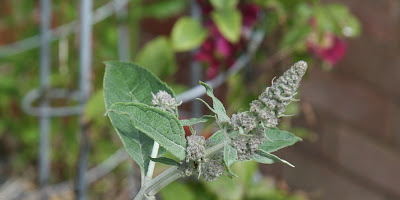 Butterfly visitors have been on the low side this year but soon the buddleja will be in flower. This plant is not called the butterfly bush for nothing! This year it will get a lot more light as I took out the euphorbia that was growing next to it. 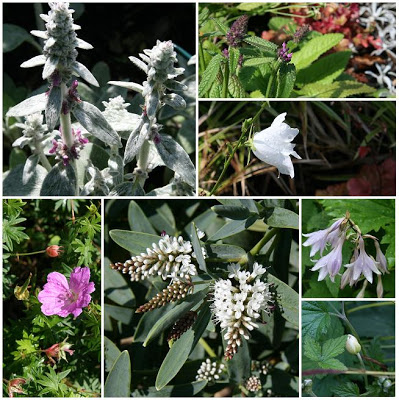 Silver foliage plants like the stachys are great in full sun but in my back garden I’ve found a spot with just enough sun for it to be happy therte too. Now its wonderful clusters of pink flowers can be seen.

The Hebe I moved a few weeks ago has survived the trip and is now in flower too. My first Japanese anemone for the year I expect to be fully open tomorrow and the Hostas have started flowering too.

Campanulas and Cransebill geraniums are in flower but the clock is ticking on them. No probs with the geraniums though, as I’ll cut them to the ground a hopefully get a second flush of flowers later in the year. 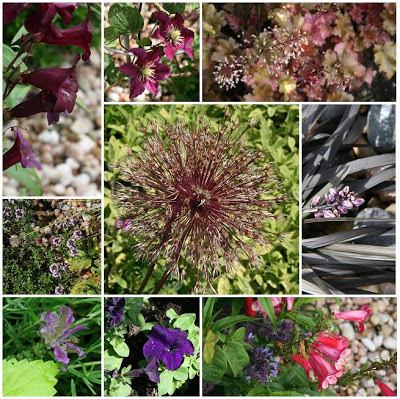 Deep coloured flowers are becoming more common in my front garden and I will never tire of foliage plants with year round interest like the heuchera and black Ophiopogon….both seen with flowers now.

So that’s about it for this month so I’ll end with the eye catching cranberry achillia which is new in my front garden for July 2009! There are a few other flowers that I didn’t catch with my camera in the spell between showers of rain yesterday like the white and blue borage. Interestingly looking at my posting for last year we seem to be ahead with many flowers over. 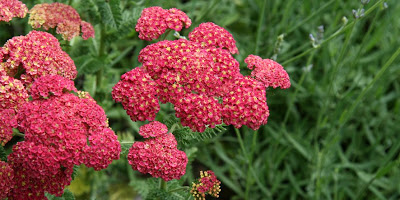 To see more flowers from Scotland at this time of the year you might like to see the borders in the garden visit of my previous posting. You can also pop over to Carol’s posting to see other garden blooms from all around the world vis the link list there. It’s great fun internet garden visiting too!

Have a great weekend 😀