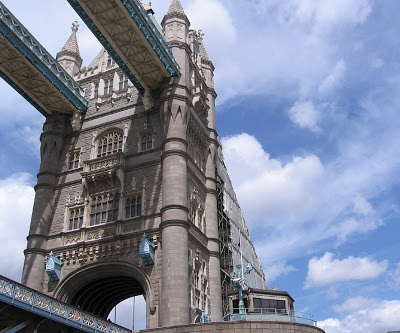 London Town… not exactly the location you’d expect from me for a day out! After an early morning rise and flight on Wednesday… hey presto we are walking the streets of London. Well, not quite…

Perhaps a Londoner might guess our location? We were sailing along the Thames on a river boat! My daughter and I really just ‘flew’ down from Edinburgh for the day and were now sailing from a pier just East of Big Ben towards Canary Wharf… under Tower Bridge! 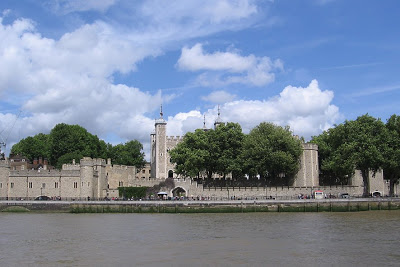 We passed The Tower of London first which has so much history behind it including the Traitors’ Gate to the left on the water’s edge in the photo above.

If you click on the photo to enlarge it you’ll see the crescent shape on the wall with the writing above it. On previous holiday visits when my daughters were young we did the tours but not this time. 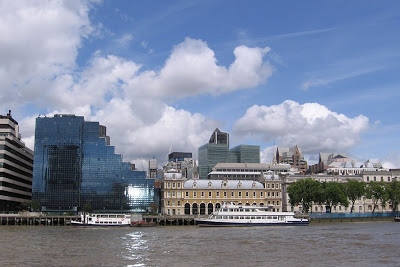 On this occasion… we were heading for the more modern skylines. Sadly, from the pier, Canary Wharf didn’t quite meet with the expectations my daughter had for our trip after seeing it in a Geography video at school. Perhaps we needed to see it from another part of the river.

Many of the buildings we saw prior to it looked much more interesting like the blue windows reflecting across the water in the building above. What wonderful clouds and skys were seen from the river too.

Okay… so this isn’t showing any garden watching! A tight itinerary was required for this trip and a bit of research too so we could take in a few sights. A garden visit had been discussed… but reality kicked in on my part and it just couldn’t happen. Oh yes… but I had one in mind! 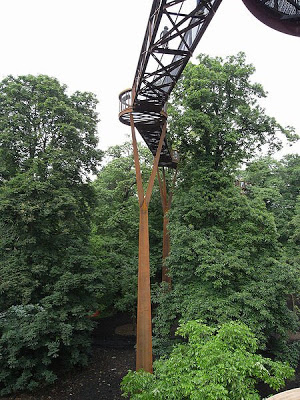 Image of Kew from Wikipedia
Kew Gardens is probably the most well known garden in London and we have been lucky enough to visit there on a few occasions when we have stayed longer. That… still wasn’t the garden on my mind.

Looking for extra photos for this posting I remembered that Kew had a new treetop walk …oh that would have been great to see! Mm… but would we have been brave enough to walk it? Oh… but I do know someone who has… thanks for sharing your visit Celia. 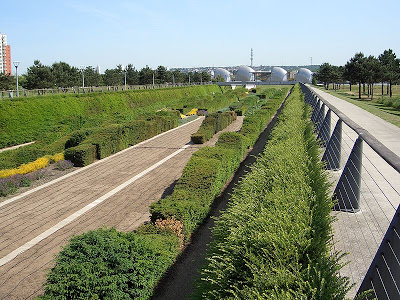 The Green Dock at Thames Barrier Park was where I would have loved to have visited. “Renowned international horticulturalist Alain Cousseran and Alain Provost selected colourful flowers and shrubs which reflect the river’s ever changing spectrum of tints, shades and shapes creating a micro-climate where varieties of plants and butterflies abound.” I loved the strips of clipped wavy hedges and was certain that walking through them would have had quite an atmosphere.

“Set within 22 acres of lawns, trees and uniquely contoured Yew and Maygreen hedges you can discover the delights of this urban oasis. An excellent children’s play area, 5 a side football/basketball court, great places to picnic and play, the Thames path, with magnificent views of the barrier, and a fountain plaza where 32 jets spring from the ground to provide a cooling and entertaining delight for children to splash and play.” Yep… I’d say A Grand Day Out for all the family. 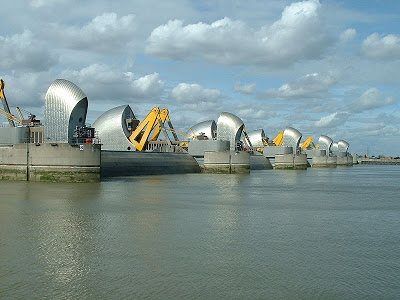 Image of Thames Barriers from Wikipedia
The Thames Barriers themselves I would have loved to get a closer look at too. Although I do love the natural world I am also absolutely in awe of large pieces of engineering with strong design such as this making their mark on the landscape.

“Located downstream of central London, the barrier’s purpose is to prevent London from being flooded by an exceptionally high tide moving up from the sea, often exacerbated by a storm surge. It only needs to be raised for the duration of the high tide; at ebb tide it can be lowered to release upstream water that backs up behind it.”

“…constructed between 1974 and 1982 at Woolwich Reach, and first used defensively in 1983. It is the world’s second largest movable flood barrier (the largest is the Maeslantkering in The Netherlands).”

Ah… finally I am thrilled to be able to link on to another engineeering masterpiece a little closer to home and one I have managed to get time to visit.

Using less energy than used to boil a kettle The Falkirk Wheel can turn 180 degrees. I found that absolutely fascinating especially in this age of trying to save energy. I loved this structure shown here on my first visit back in 2003. As with the Thames Barrier this also holds back water but in quite a different way. 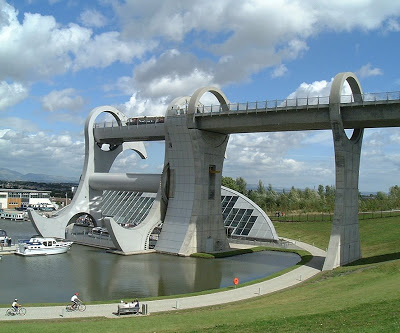 “The Falkirk Wheel is a rotating boat lift connecting the Forth and Clyde Canal with the Union Canal. It is named after the nearby town of Falkirk in central Scotland. The two canals were previously connected by a series of 11 locks, but by the 1930s these had fallen into disuse, were filled in and the land built upon.”

“The difference in the levels of the two canals at the wheel is 24 metres (79 ft), roughly equivalent to the height of an eight storey building.” It really is amazing to stand under it as it rotates. It is also amazing to be sitting on a boat as it sails in from the bottom level knowing that you are sitting in a boat lift! The doors open and hey presto… you appear at the top ready to sail along another canal.

This isn’t a garden visit so I’ll not chat on much more about this but it is definitely another ‘Grand Day Out’ however when built this was never even seen as a tourist attraction at all! It very quickly became a top tourist site so booking during the summer months is probably a good idea.

Back to gardens and a good idea for a ‘Grand Day Out’ over the weekend, one I cannot recommend more highly, is a visit to gardens that open for Charity. The two Yellow Books here in the UK (England/Wales and Scotland) list them all as do their websites. However, other gardens may also open outside the Open Garden Scheme so I’d suggest you check out local noticeboards and newspapers.

If you check out my menus above by selecting “GARDENING LINKS/Open Gardens for Charity” you’ll find links to other countries doing this outside the UK too… just incase you fancy an Open Garden Visit on your hols! Perhaps, you live in these countries and didn’t realise this was operating. Please do browse around.

Last weekend, I browsed around a very special Open Garden myself but ran out of time this week to post about it… it’s coming up next and then we’ll have a bird and wildlife update.

Suitably, this posting has to end with a link for… the many Open Gardens of London! Have a great visit if you go and if you are a blogger and have posted on any London Open Garden visits please do send me your link and I’ll add them… I’m sure I won’t be the only one that would love to read about your visit. shing you ‘GRAND DAYS OUT’ over the weekend 😀

The first three photos above were taken by me in London on July 23rd 2009. The Falkirk Wheel was taken by me in August 2003. All other photos have been taken from Wikipedia.