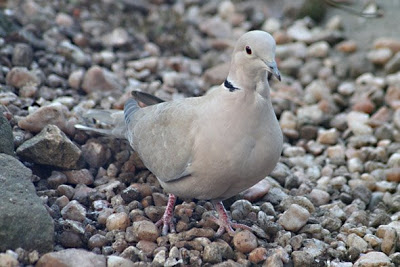 Let’s hear it for birds and wildlife visiting our jungle gardens at this time of year! One bird that has being catching my eye has been a lonesome Collared dove… but not the one above which I’m showing for comparison.

Here’s the one below that I’ve been watching. It has been sitting around the garden most days on tree branches and often just strolling around the ground…

Can you spot the difference? Let’s take a closer look… 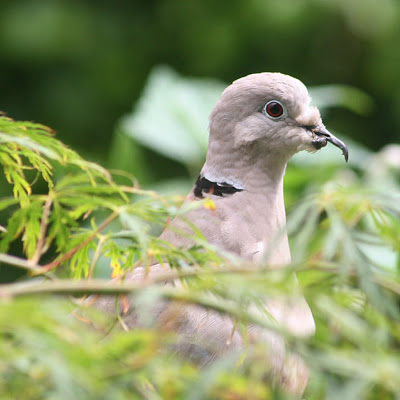 Doing some garden watching of its own is a Collared dove that appears to have the bottom section of its beak missing. It wasn’t until I cropped and enlarged my photo that I spotted this then posted this on the Birdforum.

As mentioned in my replies (on the forum) it is a curious one. Just how does this bird eat? As one reply suggested it has a black collar so it has successfully made it to adulthood so it must be managing. Another reply considered that it has had some sort of accident damaging its beak.

Recently I put out crushed peanuts for any passing hedgehogs and this Collared dove did seem to be quite interested in them. It’s a shame to see it on its own but it appears to be comfortable feeding with the Blackbirds and other birds in my garden.

In the evening it does stay on in the garden after most other birds leave. It was after 9pm in the photos above. Now… was it alone? Oh… and it wasn’t the only one that got a surprise… listen out for my voice recorded at the time!

The video above was taken through my window which I opened briefly to drop some peanuts and sultanas on the ground as this hedgehog visit was just a tad too early and the ground feeder was empty! What happened next?

The little hog ate a while as you can see in the second video below. Strangely though I have noticed that often the hogs will source out single peanuts or sultanas. It disappeared out there into the jungle undergrowth… I went quietly outside with my video camera and followed it… can you guess what it was most likely looking for?

The Collared dove clearly heard the hedgehog rustling about through the plants below it. However our gardens are not the only place to see and hear wildlife. Yep… out there on walks and on Nature Reserves we can see and hear nature of all kinds. Okay… hands up I’m making a link here!

Last Friday morning I took a wander round Loch Leven Heritage Trail to discover more than just birdsong. Nailed to a fence post was a poster… 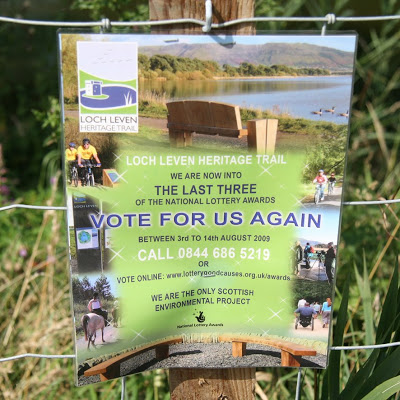 Last month when I posted video of young swallows being fed along this trail I spotted another poster but the deadline had passed for voting and I thought this competition was over. I had no idea there was one final round. After visiting this trail I would definitely like to help promote it and ask that any visitors here may consider voting for it too.

There is a quick link to the categories at the top of my sidebar but unfortunately I cannot link directly to the voting page. This Heritage Trail is in the Best Environment Project Section of this year’s National Lottery Awards. The Deadline is Thursday if you are interested in voting for any project that has made it to the final round.

Now… I’ve passed by a few times since I first discovered this trail earlier this year. Over the next couple of days I have a rather ambitious plan to help you explore it further too either in person or from the comfort of your own home… no matter where you live. 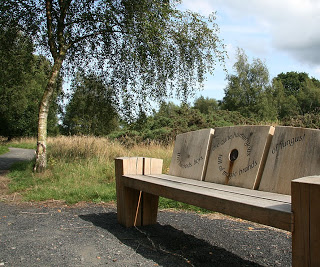 The Loch Leven Heritage Trail has made quite a difference to this area in terms of access in particular bringing visitors so much closer to nature and wildlife. Personally I think it is very impressive and would love to see them get funding from the Lottery to do even more work.

13 thoughts on “Hear and there”