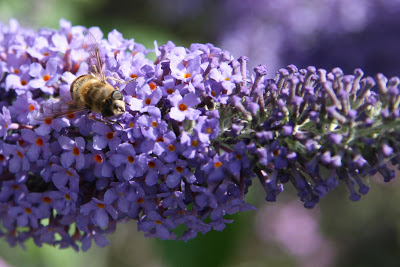 … and not before time 🙂 Throughout the school hols my video camera has been rolling capturing a variety of wildlife. I’ve been snap happy too. Scottish Schools are back now so it’s time to hand in some homework! I think we’ll have Maths first…

Bees are always visiting it and now increasing numbers of butterflies are too. I’m now even considering doing a butterfly count! Yes, it will be modest… but fun 🙂

So far, at the same time, we’ve seen four Painted Ladies… I’m hoping this number will increase yet! Two Small Tortoiseshells, two Red Admirals and two Large Whites make up this modest but record list for butterflies spotted in my small front garden. 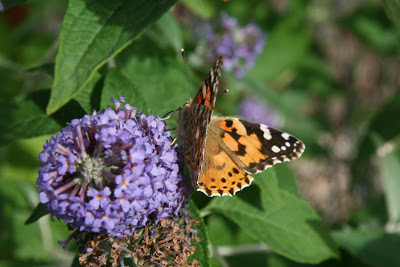 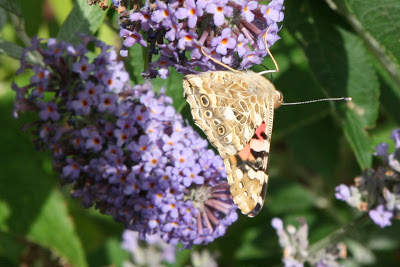 Sun kissed gravel and stones are also a very popular spot for the butterflies there. I don’t know, but the colouring of some of the Painted Ladies is looking a bit richer than usual to me.

What do you think? Oh… and you can see seedlings of Euphorbia coming through the gravel too… I’d guess and considerable larger count there! 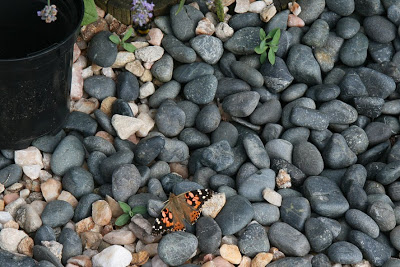 Moving on to Environmental Studies next… the plastic plant pot can be seen with the Painted Lady above. Oh wait a minute… this Homework isn’t due until the 1st September. I’ll have it ready for then. Mm… and I might not be alone with this homework 😀

English next.… a visual interpretation of the challenge that simple everyday steps can be for some during any one day… 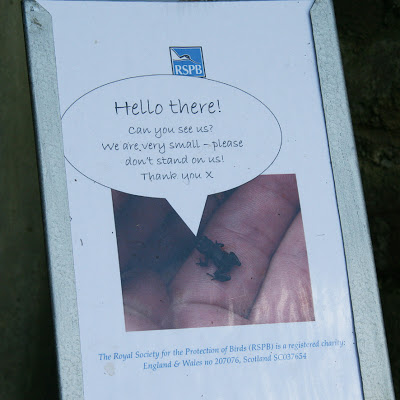 Biology… observations in bird behaviour in the garden over the summer. Homework incomplete due the lush foliage in back garden causing problems with visibility.

A juvenile Robin has been seen but photos are not yet available. House sparrows have increased in numbers quite significantly in the last week. Fat balls are particularly popular.

Science… look to the skies. Successful viewing of the Perseid meteor shower on the 13th of August. No photos or videos unfortunately. First ever sighting from the garden… amazing! Surprised at the speed the meteors travelled.

Subject chosen… just had to be from a swallow’s next in the subway to/from RSPB Reserve Vane Farm. The chicks patiently waited… as I have to post this footage 🙂

We walked under the nest not knowing they were sitting quietly above us just under the domed roof. We never spotted the tiny frogs either on our way out either.

Walking down the steps on our return we spotted a little movement on the ground… then the tiny frogs. Quietly watching two frogs we were startled by the noise of chicks being fed! Had we not stopped to watch the frogs we would never have seen the young swallow chicks!

What a delight to see. That’s also the delight of watching out for wildlife… you just never know what’s around the next corner… or under the next roof 😀 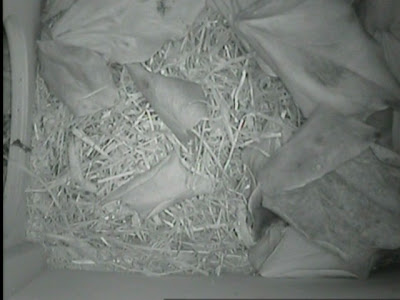 Hedgehog house with camera has not shown significant disturbance on floor to suggest any enquiries. Re-think considered on location.

House moved for third time… someone one popped by the first night! Now awaiting a return visit. Tasty bites near by to encourage further enquiries include some dried mealworms. Fingers crossed 🙂

8 thoughts on “Back to the wild side…”