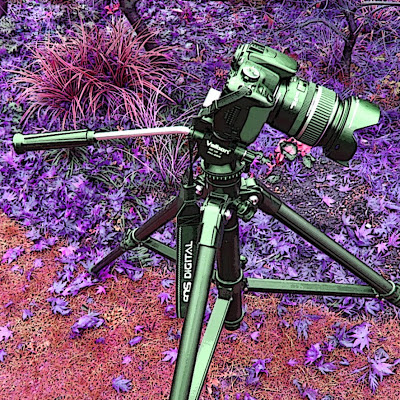 Quickly summarising… most photos on my blog have been taken with a Canon EOS 400D using a 17-85mm wide-angle lens (Canon Ultrasonic with image stabilizer) or a 55-200mm zoom lens (Tamron).

Occasionally, some photos will be from a Canon PowerShot A520. Other photos come via cameras in nest boxes or as frame grabs from video footage. Photoshop 6 is used for cropping, resizing, enhancing or special effects.

Below, you can see that I also use lens hoods for the Tamron zoom and the Canon wide-angle lenses. I should say here that the deep shaped hood for the Canon lens casts a shadow over images if used with the built-in flash. 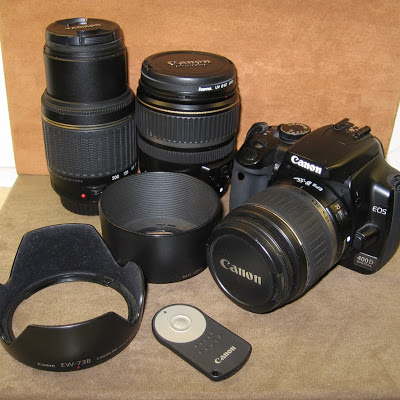 I always have to remember at garden shows when it is sunny outside and I am using the hood I should remove it to photograph displays indoors.

I should also remember in conditions of poor light and I am using a tripod that I have a remote control (shown above) to take my photos to prevent the slightest shake and therefore blurring. It is a very handy little device. 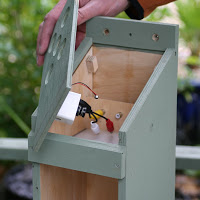 As this blog is a gardenwatch I also have a camera in a nestbox. I bought this as a complete unit from CamNest after enjoying reading through Peggy’s Nestbox Diaries.

We exchanged many emails about the excitement and sadness of watching what goes on during nesting. Only two days after my Nestbox went up we had a pair visiting… I immediately mailed Peggy!

It was a wonderful moment. Peggy asked to use this footage on their website home page where it still is yet. The photo above shows the nestbox being cleaned after use. The roof design of the nestbox has been changed since. You can see the technical details of the camera used in my nestbox here.

The camera in my Nestbox gave colour images during the day with black and white in lower levels of light. When it was dark so was the nestbox. Audio still worked and I could hear tapping noises through my computer speakers. 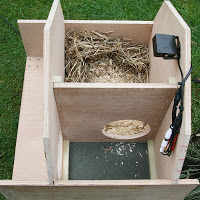 Night vision beckoned now. Could I put a camera in another existing nestbox? I began chatting to Mike Nash at HandyKam who had just the right kit for that. I had plans ready to do this when… along came the hedgehogs again.

Email chat with Mike followed and it was clear he too was as enthusiastic about filming wildlife as I was becoming. Through my blog I have been delighted to e-meet so many enthusiastic people.

My daughter was building a hedgehog house at school… yep the night vision camera had a new location. During the summer we caught some lovely footage of visits to it but alas no winter residents. That’s okay as its nesting next year that I’d love to watch. To see the technical details of the camera in my hedgehog house you will find them here.

Gardenwatching after dark is fascinating. A simple CCTV from Maplin bolted on to an old tripod provided me with an opportunity to sit indoors and watch on my PC screen what was going on outside. It was brilliant to see the hedgehogs pass through or feed from food on the ground or in a simple feeding station. The camera did well outdoors in all conditions for a good time but finally it stopped working. 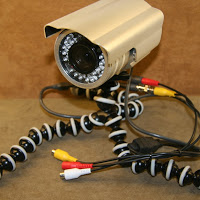 A Vari-focal outdoor colour camera kit from HandyKam replaced the Maplin camera giving excellent night images. This was a new product from HandyKam and Mike was particularly excited about it and I could see why in the photo below. This camera has an adjustment on the back for focusing to the distance you want to watch.

Although this camera came with a wall/wood fixing I have used it with tripods instead. You can see the technical details of this camera here. 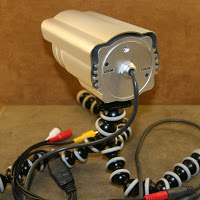 My favourite tripod for night filming can be seen opposite. It gives great flexibility with its strong twisty legs. The Joby gorillapod can grip around things just as easily as simply giving a low viewing/filming position. This product can be seen in shops in various sizes too. You can see details here.

As you can see in the photos the night camera has connections showing. If I use it during a night when it looks like it might rain I protect the connections either in a plastic bag or a plastic kitchen container.

The reality is that even when hedgehogs are around more regularly I’ve seldom seen them in the rain so my camera isn’t out then anyway. I have enjoyed using this camera. Clicking on the smaller photos will enlarge them if you want to see any of these cameras in more detail.

Okay… I hear you… you’d like a watch wildlife at night but don’t want to use a computer. Well… that really isn’t a problem either as most cameras like the ones above can have their connectors plugged directly into a television and you can watch from there. Recording footage is another matter and I’ll come back to that. 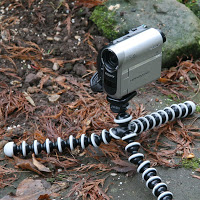 The most well used camera for watching wildlife seen in my blog is probably my fairly basic video camera. Once again during my time blogging my original one finally ended its run. Technology had moved on since we bought it but as I had many mini tapes with footage on them I decided just to get another that used tapes instead of a more techy one. Cheap and cheerful this one was and as a result I often just through it in my bag which is very handy. 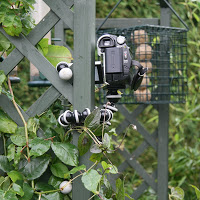 One thing I did look for in a new video camera was the ability to film (yep you’ve guessed it) in the dark. The camera I use is a Sony DCR-HC51 Handycam. It enables me to record in black and white using a nightshot plus setting. It has given good results.

It’s also been good during the day too although usually it’s on my standard tripod shown on the very first image rather than wrapped around an arch. The tripod I usually use both out and in my garden is the very stable Velbon DV-7000 with its gel head.

Although the head is smooth enough I have to say that the arm itself has given me problems. A pin has sheared making it difficult to turn as smoothly even after my OH glued it in place. That is a pity as I have loved this tripod. I will continue using it for some time yet. I also use it for my main night camera and my Canon cameras. 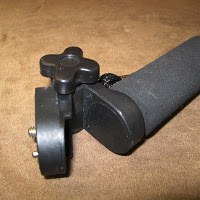 Carrying a tripod can be a bit of a pest when you are out and about and the gorillapod isn’t always the answer either. A halfway house is a monopod and I have found mine very useful indeed. It really does help stabilise the camera when doing more panoramic shots.

Once again my one is pretty basic and although it does the job well I have found one fault with it. I doesn’t have a swivel head as you can see in the photo opposite. Therefore when I am sitting at an observation window filming a squirrel or treecreeper go up a tree I run out of space to tip it backwards and miss out in some nice footage. Perhaps you can get monopods with swivel heads but I haven’t looked.

This is a posting I have wanted to do for a long time as I do get many emails and questions on what I use. Sorry, it has turned into a lengthy one! I’d like to come back to the cameras that I use to take photos again just in case you are considering buying one. Here goes… 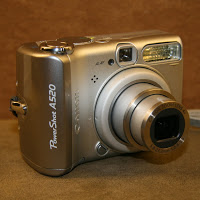 For me, the Canon PowerShot didn’t live up to the Fuji camera I had previously despite the great variety of settings it had. I didn’t find the photos were as sharp when I started using it. Not having completely steady hands, camera shake definitely was a problem there. However there have been occasions recently when it has surprised me so it perhaps is time for me to look at it again. Perhaps I am getting better at holding the camera or I am just warming to it a little. 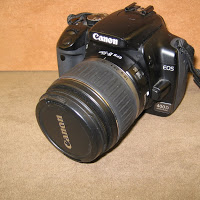 For me, the basic lens for the Canon EOS 400D definitely disappointed! This wasn’t helped when the salesman told us on purchasing a wide-angle lens (a year later) that the cost in most cameras is in the case and that is why quality is on the lower side with the lens. Sales pitch or not, for me, that seemed to be true as I love my wide angle lens with stabiliser!

When we originally bought this Digital SLR camera there was a half price offer on zoom lens. We chose a Tamron and it fits fine with my Canon 400D case. I love this lens which has enabled me to get much closer shots of the birds in my garden.

Nearing the end now… I must end with some prospective bird shots! Recently we have discovered that a female Tawny Owl visits near or to my garden. Of course we can’t tell which when we can’t see it. 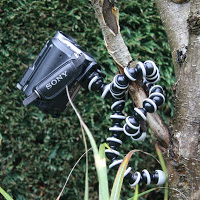 I am now eagerly waiting until we hear it again and plan putting my night camera (not the my video camera as shown) on my gorillapod tripod and wrapping it around a tree branch to see if we can catch it land anywhere near.

The hedgehogs may be out of the picture for a few months now but the nights of the Tawny may just be beginning!!

This is also the beginning of a series of postings giving more background into my garden visitors and how I blog. I do enjoy the creative and techy side to blogging.

All photos above should enlarge when clicked on.

9 thoughts on “Which cameras?”