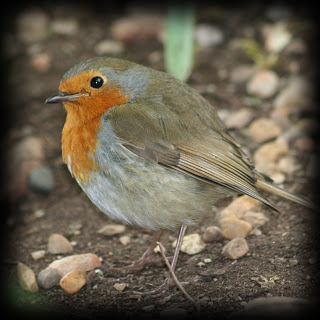 December 2006 saw the start of video uploads to my blog. Tonight’s discovery that I’ve uploaded 261 videos over 464 posts has been a shocker! That’s an average of just over half of my posts have had a video. Wow! I’ve used three video hosts moving around as I searched for better quality of images. I’ll come back to comparisons in a future posting.

As plants, birds and wildlife are relatively quiet for the next month I thought I’d take this opportunity to post on some of the tech stuff behind my blog and postings.

I’d like to share with bloggers both new and established some of the creative stuff that has kept my blog ticking over. Although much has been (and continues to be) a learning curve I have had great fun with it all.

As regular visitors will know… my blog began as a way to share images of the Robin to my homesick friend in Australia. My blog videos also began with the Robin and very short clips they were too…


From memory, at that time they took absolutely ages to upload too. Gosh… I really can’t believe I began with videos of 5 seconds and postings of one paragraph! Yep… things have certainly moved on… you can’t stop me chatting now 😀

Video editing didn’t begin with my blog. I had been playing around with it for a number of years before. Holiday stuff, garden visits and garden fun with my daughters were the first. I also filmed and edited wanders around my garden at different times of year where (don’t laugh) I talked to myself about what I wanted to change… much more fun than a notebook 😀

Okay… the title of this posting is about the soundtrack. Now, where garden visits completely suit a piece of bright airy music with a bouncy beat or a more sophisticated classical air, the music soundtrack on a piece of wildlife film is quite different.

In the early days of publishing bird videos on my blog I received an email from a gentleman questioning why I added music saying it was a pity and that he would rather have a natural sound track. I completely appreciated his point and that others have made on occasions since. So why do I do I add it?

In short, filming indoors through a window (as I do probably in more than half my bird/wildlife videos) gives a recorded audio of bangs, clatters, chat, TV and my daughters. Yep… many background noises can be recorded… including the kitchen sink at times 😉

Okay… so I could drop the background sounds completely and have a silent piece of film. Perhaps that would be preferred…

I would be interested to know. However, I myself would lose interest in watching a piece of film like the one above without sound. For me it just feels too long and I am fully aware that many blog visitors are blog hopping and my chatting on probably keeps them long enough.

The soundtracks I add to my videos are purely to entertain and capture the imagination of the video capture itself. Hedgehogs just call out to me for Country music for example 😉 If they make me smile than I really hope they do the same for anyone watching them.

I do put quite a bit of thought into a limited music choice on my video editing software. Sometimes I alter clip lengths to make it fit better too. I’ll chat about that another time. I do have great fun testing out tracks to my video. They really can change the mood of the finished film too.

Take the test video of Red Squirrels below which was taken in a Reserve Visitor Centre with chairs moving, people walking, phones ringing etc. With sound cut, I’ve edited it with three clips and on this occasion a separate music track for each. I really do have fun with video editing… have I mentioned that 😀

The first piece of the film is the close-up of the squirrel shown above but this time with music. The focus goes in and out a little as I have it set to auto as in recordings like this when there is movement a preset focus doesn’t work too well.

Adding music has the advantage of taking the viewers attention away from the ‘out of focus’ bits too. I pitched the first busy, bouncy music to the character of the squirrel and the way it was eating.

The next two clips are purely for comparison and to show how you can change the perception of the squirrel by the track chosen. The middle music track shows the knawing mischievous squirrel as relaxed and in no hurry whatsoever… which was not the case. It had run at this feeder at speed chasing off a woodpecker!

The last clip, with a more fun and a carnival flavour, instantly made the film look sunnier and made the squirrel look fun and in a party mood using the slight swing of the feeder as part of this. Enough chat… roll the film…

Yep, as I write this I realise I have changed the description of the video to a film. I guess when I add a selection of clips I do see it more as a very short film.

Okay… so you’re perhaps sitting reading this and thinking you might like to play around with a soundtrack or two but don’t have that option with your video software.

Yes, you can consider music CD’s but there’s always the copyright issue there so this is something I personally just avoid. However, recently I have discovered another interesting option for a video music soundtrack and have tried it out as you will see with the video below of the Osprey chick last summer at the SWT Nature Reserve Loch of the Lowes.

Okay… I perhaps should warn you that the video below taken from a live feed TV screen in the visitor centre is perhaps a bit raw for some as it shows the Osprey chick feeding on a fish. However, on the side of this bird it is just eating the meal its Dad brought it. With this in mind I added a gentle piece of background restaurant music…

This video, like many of my videos now was uploaded to YouTube. Just before Christmas I discovered an interesting feature available after a video is uploaded. Once uploaded and live, you can do an audio swap on your video using a collection of soundtracks provided that don’t break any copyright laws.

I should point out that you lose completely any original sound on your video so if you did have bird calls as well as a lawnmower running in the background of your film both will be lost completely. I have a series of images to explain how you do this but as this posting is way longer than I intended I’ll add them in a future posting.

Okay… nearing the end now! In and ideal world, weather permitting, capturing bird and wildlife film has the best results when taken outdoors. Hearing the birds chatter, call and sing are the best soundtrack of all for a video. However, I often find I have to increase the volume of these soundtracks and even in doing so as the final video below shows it still needs the speakers to be turned up!

LOL… and there lies a problem if a piece of music is added too as you’ll see in this final video of blue tits at a peanut feeder. Yep, like Jan, you’ll get a huge fright! I did consider a warning message in this film but opted for pre warning you first. Okay… consider yourself warned… to hear the blue tits call turn your speakers up but after the film fades to black… turn your speakers down a bit 😀

The final track has both background sound (max volume) and music (low volume) as the background became quite noisy and itself would have spoiled the clip. This was a particularly good capture and not one I’ve seen before otherwise I wouldn’t have included it. I’ll not say what it is but only that the music soundtrack is titled ‘Limbo’…

Wasn’t that a lucky capture? Okay, I’ll give you a lucky break now too and bring this posting to a quick end! Future tech based postings will not necessarily be so long… don’t worry 😀 They will vary based on the content. Now, I’d love to know… have I managed to tempt anyone to play around with sound on video now? Oops… sorry Jan 😉

The videos at SWT Reserve Loch of the Lowes were taken in 2009 at a guess around the end of July.

13 thoughts on “Video editing… the soundtrack”