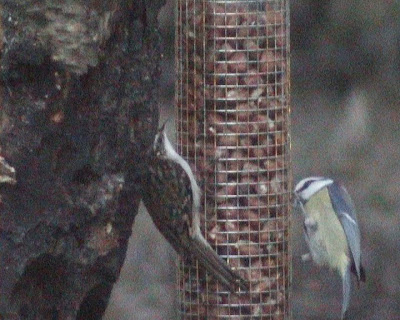 Now wouldn’t that be unusual? Last Saturday, towards the end of the day we did actually see this… although not in my garden! We were at SWT Reserve Loch of the Lowes sitting inside with coffees/hot choc watching through the observation window out to their feeder area.

Being late in getting there we knew we wouldn’t see a great variety of birds. The light was going and photos and video were unlikely to give great pictures. I took my cameras anyway. We had popped out more for the run in the car as my daughter was/is studying for exams.

Treecreepers were what I had hoped to see at that time of day. I have seen them then before. It is fun to watch out for them in the fading light. ‘An inconspicuous, mouse like bird’ is a great description.

Shuffling jerkily up and round tree trunks in search of insects and spiders with camouflaged mottled underparts even with good light they are difficult to spot, photograph or video. I have tried to follow them up the trees on a previous visit.

As we arrived, two Treecreepers had been spotted visiting a peanut feeder in one area. I decided to take a gamble and sit with my camera on its tripod watching another peanut feeder as in previous visits I had seen Treecreepers on the trees nearby. Of course, I watched the tree too 🙂

The title of this post tells you that we were lucky. At a guess, watching the video capture below, two Treecreepers visited the peanut feeder when I was filming. However, I was particularly lucky with this piece of footage.

When the second Treecreeper was on the feeder a Blue tit joined it and if you watch the film you’ll see some interesting behaviour from the Treecreeper. It looked like it has trying to hide itself against the tree trunk close to the feeder. I didn’t notice that at all when I watched it from the Centre. These extras are often the case with video captures and it was a delight to discover this when I went to edit my footage.

Not everyone can view my videos, I understand this. So, for anyone with this problem and for my parents who read printed copies of my blog I have some pictures below. I have to stress these images are not photographs but screen grabs from my low light video capture. However although very grainy, lightened a little, they capture the moment well enough.

Notice the Treecreeper pushes itself away from the feeder to the safety of the tree. 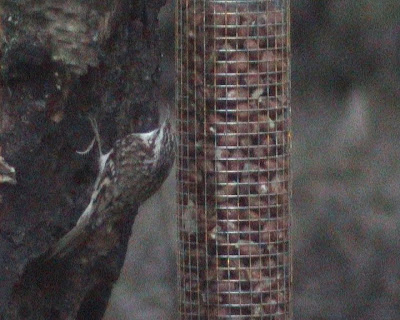 Notice the giant (compared to its body) clawed feet of the Treecreeper. 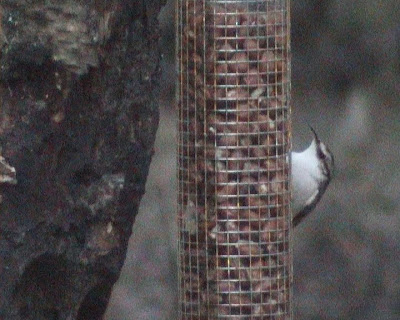 Notice the very white underparts. Very clean for being so close to tree trunks most of the time. 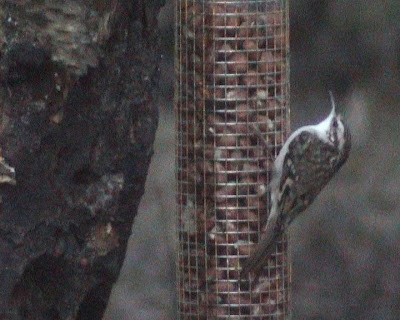 Notice the elegant profile of the Treecreeper. Notice its long curved bill for probing tree bark for insects. Notice its stiff tail too which it uses to provide a prop when climbing just like the Woodpecker.

Other birds seen at this later hour were the coal tits and robins. We also spotted a mouse in a branch pile below a feeder close to the window. There was also a late surprise visitor too… a Jay.

The outline of the Jay could be seen as it flew through the woodland. I didn’t get footage of it on the feeder it visited. However, on looking through my video above I think it is perhaps possible it landed on the ground behind the peanut feeder. I noticed a flash of brown and blue a minute into my video just before the blue tit returns. It just shows what we can miss when watching something else.

It’s another cold and frosty morning here today in my garden. The birds are busy at the feeders. Starlings are arriving in bigger groups at the moment. However we are lucky to have sunshine and blue skies… so I’ll forgive the cold. Although are other parts of the UK may be seeing snow today and breakfast television this morning showed images from a very wintery Washington. Gosh it looks really wild there!

Wishing you a great weekend and that the winter weather eases off for you if you are having a wild time of it. Stay safe and warm 😀

The video above was taken at SWT Loch of the Lowes on February 6th 2010 and the still images were taken from it.

14 thoughts on “Treecreeper on peanut feeder”