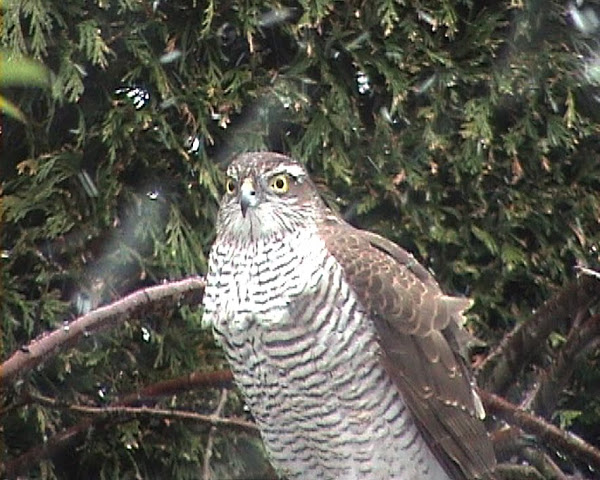 …again and again! Snow covered ground makes it difficult (once again) for the birds to find the food on the ground. As a result, the hanging feeders and bird table have become a bit over crowded to say the least. Chatters of frantic activity increase in volume with the increase in birds arriving at them.

Just where do they all come from on wintry days like these? Ah… but they can all vanish in seconds with an eerie silence replacing the chatter. You’d think it would be easy for the Sparrowhawk to catch prey in gardens at times like this. 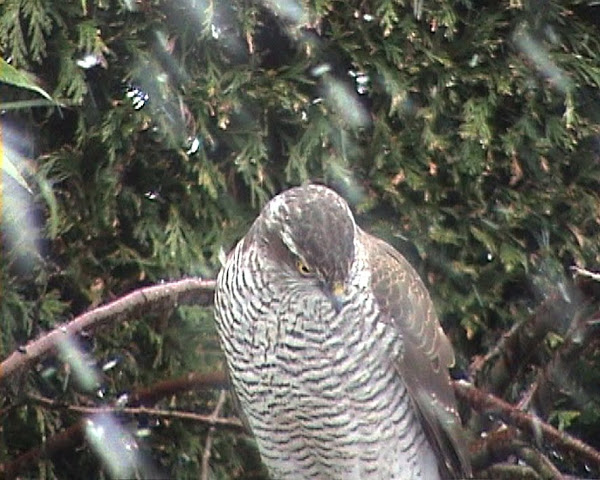 There is no background music in this video. It is silent just as it was in the garden.

Yep… this female Sparrowhawk sitting on the roof of my bird table in the wind and snow was wondering this herself yesterday. Again and again she has visited my garden over the last two days. It may of course be two or more females but this is definitely the most visits I have ever seen over a short period like this.

The photos above are screen grabs from my video for those who can’t view it. I would also like to mention that I am now adding captions below my videos for people that have difficulty with their hearing when playing videos with background music.

The caption serves as a warning sign so speakers can be turned down if necessary. Although the last few videos I have posted have been without music I still plan to add it to replace background noise and for longer videos.

Although the female Sparrowhawk was never spotted catching prey unfortunately for a male Chaffinch… a male Sparrowhawk was. The actual snatch wasn’t spotted but the feather plucking was. On the snow covered ground the small grey feathers were blowing around and sticking to it.

The reality is that this bird needs to feed on days like this too. I just hate to see it in my garden. I did record some video just to see what bird it caught. I then opened the window to chase it off. It didn’t eat the bird in my garden but removed some feathers.

Reconsidering showing this short piece of video footage again in October 2011 when I am updating links. I have have decided to add it for those that are interested in birds of prey. This is the reality of nature be it in or outside our gardens.

Heavy rain followed by more snow is being forecasted for tomorrow right through until Saturday. I guess it’ll be a busy day out in the garden again. However, I had hoped to get out and do some gardening before posting views of the garden for an end of the month review. Oops… it will really be reality shots then… I think 😉

The video and screen grab photos were taken in my garden on February 24th 2010.

12 thoughts on “Snow brings them in…”