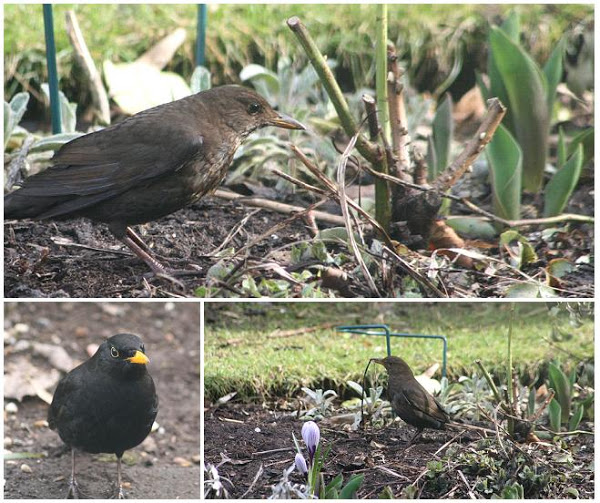 Jack Frost is quaking in his boots… my Brunnera plant that is! For the last few days a female Blackbird has gone away with beakfuls of damp, root like material from around the crown of this plant. I am guessing this is the first layer of her nest. You can see her in the montage below looking like butter wouldn’t melt.

You can also see a male Blackbird that was on guard duty when she was visiting too. Yep, it’s getting quite a battlefield out in the garden just now.! Much chasing is going on. It won’t get any quieter anytime soon either. She is getting chased by both females and males but just kept coming back again. This male was one of the ones seen chasing her.

Getting photos of the female with material in her beak has been tricky. I keep missing her. You can see just one strand in the montage above. I set up the camera outside on my tripod and let it record the area where she has been seen. Bingo… got her with a beakful!

Unfortunately, the bird soundtrack in the background wasn’t so lucky. Hardly any was recorded. In this instance, as the video clip is just over a minute, I have added background music. However, the music has been edited with a low volume so you may need to turn your speaker volume up if you want to hear it.

As regular readers will know, I have a blackbird nestbox in my garden. The female Blackbird that is gathering nesting material just now is not taking it there. She is doing something strange with it though.

Usually when birds collect material they instantly fly up and away with it… usually over my hedge. The Blackbird in the video above isn’t doing that. Each time she has a beakful of material she runs along the ground and disappears under my hedge. I don’t see her take flight at all. Perhaps she does so when she gets through the other side but this is quite unusual behaviour. I hope she isn’t building a low nest as cats do prowl along there.

So that’s a proper gardenwatch update for today. Elsewhere in the garden the crocuses are still looking great and the narcissi have good sized flower buds now. Oh… one final thing I am wondering if a hedgehog has taken a proper look inside my hedgehog house. There has been a good disturbance of the material now.

Had no sightings of hedgehogs out and about as yet but I make sure I’ve food out overnight just in case. However, I do know of a couple of blogs (HogBlog and Midmarsh Jottings) who are sharing hedgehog visits just now… both have video too! Great to see this again 😀

Both these gardens are quite South of mine in parts of England. I’d take a guess that they have already seen nesting material being collected there. Blackbirds could quite possibly have completed nests there too. It’s always fascinating to hear the differences around the UK and in other parts of the world.

Have you seen any nest building activity in your garden for this year?

The photos and video shown above were taken in my garden on March 23rd 2010.

13 thoughts on “The nest build begins”