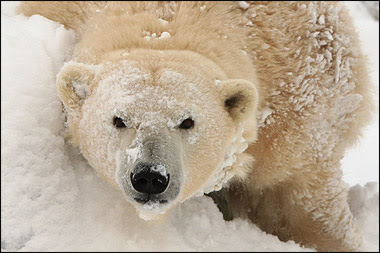 Not quite Canada, but she has space to roam now and the harsh weather this winter has made her feel quite at home! Mercedes, the Edinburgh Zoo polar bear, is now living in the Highlands of Scotland and has been enjoying the snow!

Back at the end of July 2009 I mentioned her enclosure at Edinburgh Zoo and the Centenary Appeal raising money to re-house her in a new purpose built enclosure at the Highland Wildlife Park, near Kingusse.

Just three months later, and a three hour journey in a crate on the back of a lorry and Mercedes arrived in her new home. For those who can’t view the video below I loved seeing her eye at a peep hole in the crate. I enjoyed seeing her wander about exploring her new estate too.

Estimated to be 27 years old, Mercedes will now spend the rest of her days in her new home. She could enjoy living here into her early 30’s. Mercedes, the only polar bear in a UK zoo, came to Edinburgh in 1984. Looking for a link to the Centenary Appeal I discovered a bit more of her history.

“She was rescued from her native Canada after she was scheduled to be shot. Unfortunately, she roamed into a nearby town in search of food and, as they are dangerous animals, this behaviour had to be discouraged. Initially, she was captured and the number ‘39’ was painted on her coat which allowed her to be tracked. On her third visit the decision was made to shoot her.

“Luckily, one of the Society’s life members enlisted the help of her cousin, a former Minister of Fisheries in Canada, who helped RZSS save her and provide a new home. Mercedes, the car company, assisted with the costs of her transport, hence her name.” 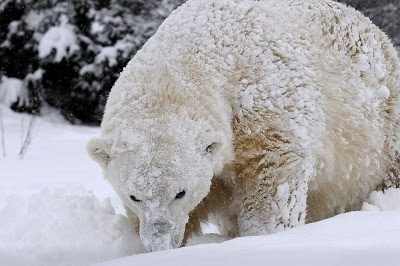 Naïve perhaps, but I never considered her name to have anything to do with the car at all. She has always, and still does, suit her name. It’s brilliant when major companies assist charities and wildlife like this helping to give a polar bear a life that has turned out to be a long one. Her story at the zoo goes on:

“When Mercedes first arrived she was paired with a male polar bear, Barney. They had two cubs, To-Nuik and Ohoto. For the past fifteen years Mercedes has been our only polar bear – which is the natural social state for this solitary animal.”

“Mercedes’ keepers provide the highest possible standards of care and whilst her enclosure is adequate to meet her needs, public perception has always been that they would like to see her in a larger enclosure”

Hands up, as I said in my post back in June, I always felt uncomfortable seeing Mercedes in what looked to me like too small an enclosure. That is really why I planned an update post when she moved to the Highlands. 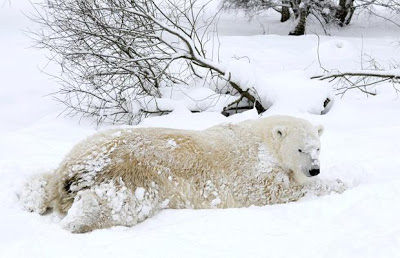 Seeing Mercedes trudge through and roll in the snow of her enclosure for myself would have been fantastic. However, there was no way I’d take the car journey through snow covered roads… if they were open. As you can see, I have searched for snow images. Here you’ll find a flicker photostream if you’d like to see more.

At a cost of £300,000 for her new home at the Highland Wildlife Park, Mercedes is now in one of the largest polar bear enclosures in Europe. The Society was delighted when the army pledged to contribute their time and machinery to develop a state-of-the-art home for Mercedes. This meant that the new enclosure only cost the Society £75,000, which was raised through donations.

“Mercedes’ new home features a large pool set in over four acres of land, which is typical of the polar bear’s tundra environment.

“Visitors will be able to watch Mercedes from both the main reserve and from a brand new viewing platform at the top of the hill, which will provide a unique insight into the natural behaviour of this wonderful and yet sadly endangered animal.” You can see a plan of the enclosure below. 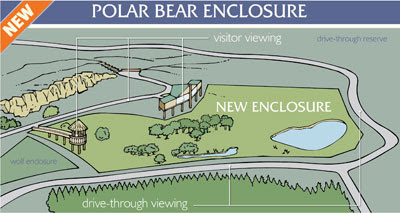 This won’t be my last posting on Mercedes. I’m looking forward to making a trip up to see her myself at some point this year. I’d absolute love to be able to capture photos and video to share with you too.

It’s a sunny but wild, windy day here today. Hope its nice with you. Wishing you a good weekend, out and about and in the garden be it watching or working 😀

No images shown above belong to me. Please respect copyright.

10 thoughts on “Catching up with Mercedes”