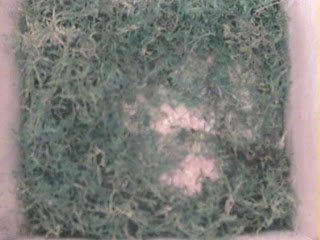 Sh… perhaps I shouldn’t even suggest this. Yep, last week a nest began to shape in our new nestbox with a B&W camera inside. We had a Blue tit roosting in it too until one night she didn’t appear. I posted:

“Sticking my neck out here, I’d say she’ll be back to this one. She has worked hard on it in a short space of time. I’d say she’s in a hurry. Previous nestbox stories from my garden have both had a night with an empty box after the nest build has begun. Here’s hoping she’ll return to roost here again tomorrow night.”

Well, I was well wrong… disappointment all round there. There has been no activity in this nestbox since then.

We have only seen two broods of chicks in nestboxes and sadly neither lived to fledge dying at around 7-10 days. I would so dearly love to see and share the whole story of a nestbox family.

How quickly things can turn though. The highs and lows of the garden… can we all cope with these dramas?

Moss discovered in nestbox on Saturday 2nd May at 09:50.

Yep… there was moss already in the box! There had been nothing in it the few days before. I was busy on Friday and nowhere near the PC. I guess as I was dreaming of tulips a bird was dreaming of happy families in my nestbox 🙂

For the last two nights we have had a rooster in this nestbox. A different female Blue tit (which I can tell by her markings) has definitely earned the rest too. She has been incredibly busy with this nest. It is well past the stage of the other one and this lady looks like she has done this before! I’m not thinking this is a first time Mum here. That is excellent news for the success of a brood.

Okay, we’ll not get carried away here. I have no intentions of sticking my neck out this time! This bird and her mate are not getting an easy trot at our nestbox. They do have competition for my garden territory. The female is getting chased into the nestbox either by her mate to keep her safe or by another blue tit trying to get rid of her. I can’t really tell.

Suffice to say our female Blue tit has carried on building her nest regardless! She has been in our nestbox while three Blue tits have been swooping at speed all around my garden up and over the hedge again and again. I really don’t know who was chasing who but something was definitely going on!

Goodness knows how this tale will end. Can our hearts take it all? 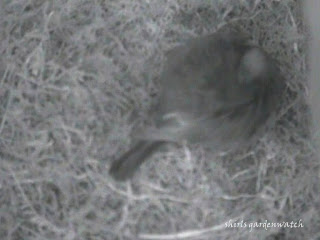 I do have some video footage from inside the nestbox which I’ll look at editing tomorrow. I’ve also some absolutely delicious tulip photos to share later on in the week once I get some ID’s for them. I got a chance to chat to Anna after the talk too which was brilliant.