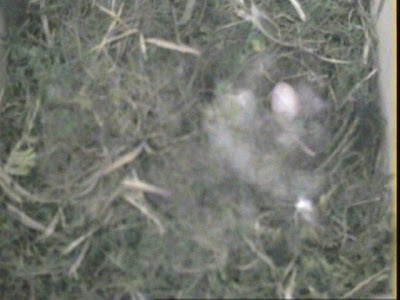 Fantatsic news… this morning we have confirmation that our Blue tit nesting in our camera nestbox has laid an egg! I’m thinking she has actually laid two and the other is to the left but so far only one has been visible. So the story begins for real now. It would be absolutely brilliant if this one sees chicks fledge.

Yesterday the female Blue tit wasn’t present at all in the nestbox during the day however at lunchtime today she appeared looking a little anxious around her nest for a little while. Perhaps other Blue tits in the garden were around. 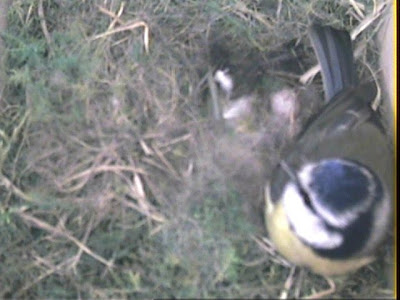 As I’ve said before, my instincts here are that this is not a new Mum. Her nest build was quick and efficient. No mucking around taking all the material out again to start again as we have seen in the past. For those new to this story, I’ll give you a quick update.

Based on recent views inside the nestbox, I’m thinking she began her nest build on Friday the 30th May. We spotted moss in the nestbox for the first time on May 1st.

The video below taken on May 1st shows how quickly she was building her nest despite being chased by other birds in my garden. Notice how she slows down by running around the box.

There is added background music to this video and it gets louder as she flies further away for nesting material.

Based on the previous two nests we have seen completed it was clear that May 4th saw the final stages of the nest build with the final soft layer of feathers and wool coming in.

On May 4th, as I did for the previous nests, I put out a basket of natural wool material to hang on a tree branch. I picked it up from a RSPB shop.

Wonderfully within minutes of the wool hanging out the Blue tit had investigated the basket. Shortly after, she began to take some into her nest which you can see in the video below. 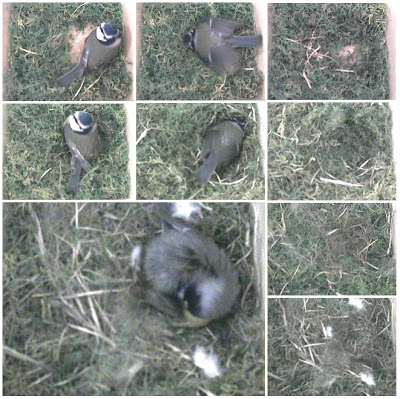 So there you have it, the nesting story begins. The next question is… how many eggs will be laid?

Finally, for those expecting a tulip photo fest posting today… it is coming… late tonight. I knew I might have a conflict in postings this week. A very nice position to be in though. I hope you’ll enjoy following the tulip fest too 😀