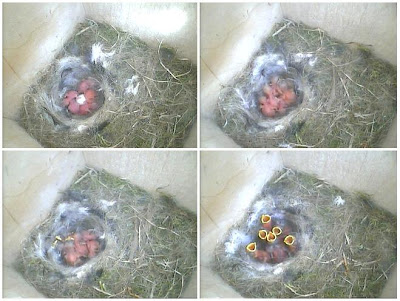 Phew… I have been a tad nervous this week. I have been collecting photos and video of the blue tit chick family in our nestbox that has a camera since the first chicks hatched (Day 1). After seeing two families fail in previous years I am very aware of how quickly things can change in the nest. I am delighted to say that as I write this I can also see (in the top RHS of my monitor) our growing chicks. As of this moment we still have all six too 😀

Below you will see a series of montages that show how the chicks have grown. Each photo represents a day with the final larger one taken this morning at around 8am. Starting top left, Day 2 (May 25th) is the first photo where the first chicks are just one day old. Clicking on images will enarge them. 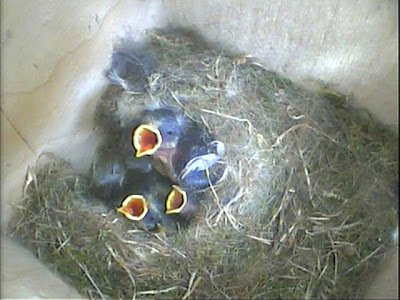 So as you can see now, our chicks now have blue feathers, yellow feathers, wings with wing bar markings, head markings, dots for eyes and the instinct to peck at bugs on themselves to remove them. They also know to keep their mouths open and try and get out of the nest/away from the other birds when it gets warm in the nestbox. Wow!!

Series 2 of bird TV has been quite a challenge. Capturing the footage is relatively easy. I just click the button to record when it looks like there is something interesting to see. I don’t have motion detector software. What you see in my videos is what I have been watching live. I like that idea 🙂

Video info: A series of clips starting just 10 mins after the first Blue tit chick hatched on Day 1. The chicks start pink and by day 11 very little pink remains. Dusky dark blue is almost covering their original pink skin bodies. They have clear wings forming even with markings and yellow is starting to cover them too. This video has background music.

Video info: A series of clips showing how the parent Blue tits have looked after their family in the early stages. The male has been a good food provider bringing in caterpillars and spiders. He also discovered (very quickly) the live mealworms I put out in a feeder for them both to feed the chicks.

Fascinating to watch as the male realised they were too big for the chicks and he would fly off to a high tree branch and (presumably) eat part of the worm so it would be scaled down for the chicks. I was thrilled to see them being taken for the chicks. Mini live mealworms have been ordered but we’re still waiting… Bank hols… lol

The female on the other hand has taken to supplementing her caterpillar and insect offerings (when she has left the nest) with some of the fatball hanging in a feeder. Between the two parents the chicks have had a well varied diet.

It has been fascinating to watch the different roles of the parents. The male’s role seems to be getting food for the chicks… although he doesn’t always get to feed it to them. The female does her wing flapping action telling him to pass the food to her and go and get some more. Lol… he doesn’t always listen to her. Absolutely fascinating to watch… both parents seem very determined to follow there own idea of their roles in this family. A joy to see!

Video info: A series of clips showing how the parent Blue tits have looked after their family of six during the middle stages. The male has continued to be a good provider of food and the female has been providing food also.

In addition the female has also focused her attention on hygiene in the nest, including herself and the chicks. Her nest cup has evolved in the process of housework and has broken out completely along one wall.

Worryingly, the chicks are showing signs of overheating and the female appears to be aware of this and opts for standing outside the nest cup during the day. In the evenings she still sits in the nest cup over her chicks. She still spends the night with them.

Video info: A wonderfully sensitive moment showing a female Blue tit caring for her six chicks. This is Day 11 of this family with the oldest three chicks being just 10 days old and the youngest around eight days.

Since building this nest (in just six days) this female has been seen preening very regularly and looking into her nest for unwanted bugs/parasites. This perhaps suggests she is not a first time Mum.

However, although she has dived (again and again) into her nest to keep it clean and is aware of her own personal hygiene (sorry lol) she is seen for the first time here appearing to keep her chicks clean too. The first chick didn’t seem to mind too much but the bigger one displaying wings wasn’t so keen!

The nest gets a good clean too as you will see and chicks get pushed out of the way. The nest cup is no longer… it is now broken along one wall side and at a guess is more caldron/cave shaped then cup now. It is getting difficult to count the chicks now!

Yep… my eyes (and yours perhaps too) are a tad square at the moment! I have been enjoying watching BBC Springwatch in the evenings too… lol as if I’ve not enough to watch! For those outside the UK this nature programme has lots of cameras watching nesting birds too.

Add to that, I am trying to catch up on the BBC Chelsea Flower Show programmes that I recorded too. It has been exam time for my daughter during Chelsea so my evening viewing slot was restricted. It looks like it has been a good Chelsea this year and a few bloggers have been posting on visits. Later, I’ll come back and add some links here later.

This morning, I’m heading out to Gardening Scotland the main show up my way. It opens today and will run until Sunday. My daughter (exams over) and camera will be accompanying me. This time I haven’t seen any pre show TV coverage… can’t imagine how I missed it 😉 Although I do enjoy seeing the show gardens (a small number) it is the Floral Hall that I especially enjoy for the nursery displays there… oh yes and the sales tables!

Be it gardens, gardening, bird or wildfire watching you enjoy… I’d like to wish you a great weekend.