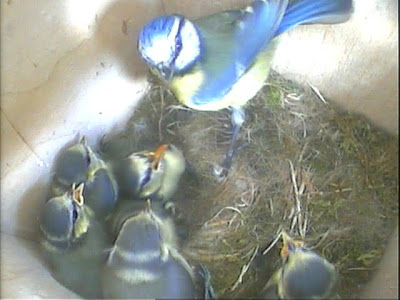 Yep, on Saturday the six chicks that we have been following in our Nestbox with a camera certainly did. Would they stay or would they go?

Feeding trips by the parents were already in full swing early morning when I first looked. The live mealworms I put out were disappearing at speed. The birds were seen moving around the nestbox and interestingly the parents would tend to favour feeding the chicks that remained in the nest cup area. 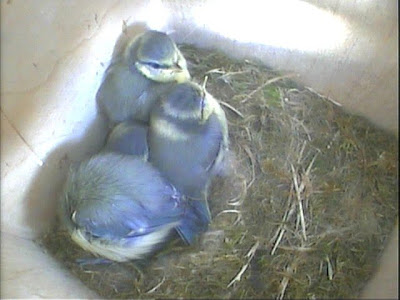 Lots and lots of preening was going on. The ball shaped chick shows some were having a nap too.

It was fascinating to watch the almost agitated sense of excitement in the box. This mood in the box was quite different from other days. It made me think of my daughters (when they were little) as we set off on a holiday. The chicks looked like they were getting themselves ready for something. 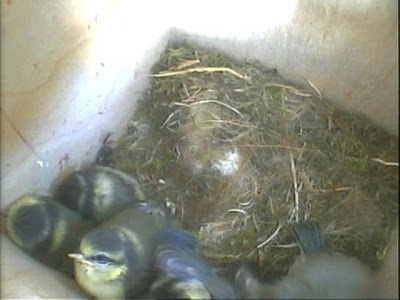 Every now and again the chicks would almost queue up alongside one wall with the main leader of the family just below the entrance hole. Some looked like they were considering it. We would be drawn to watching. I began recording video.

All chicks were also having a little look out the entrance at some point. The leader of the group was doing this quite regularly. The weather was fine. The sun was out and there was a bit of a breeze. An excellent day for a maiden flight!

I’ve so much video footage from outside and inside that it’s going to take a little time to sort it out. It’s going to be fun reliving the day. I’ll come back with video in a few days and post some screen grabs for those who can’t view them or don’t have the time 🙂 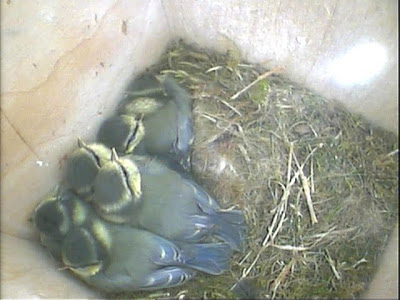 Occasionally, the breeze outside would be stronger and a noise could be heard in the nestbox. The chicks could then be seen quickly making their way over to the nest cup corner where they would stay very still. 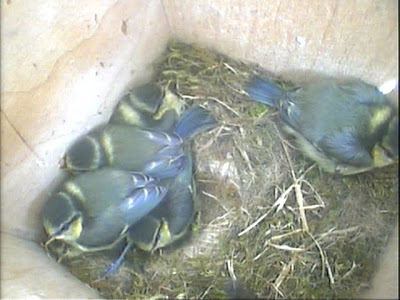 After a little while, they would be back to wandering around the whole floor of the nestbox. There was still a clear leader of the group. 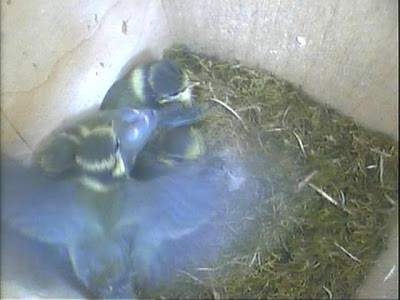 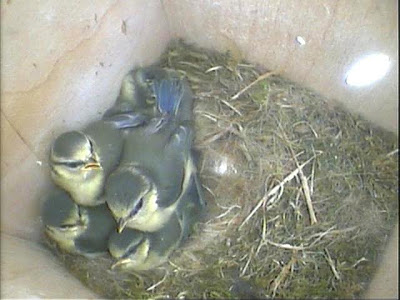 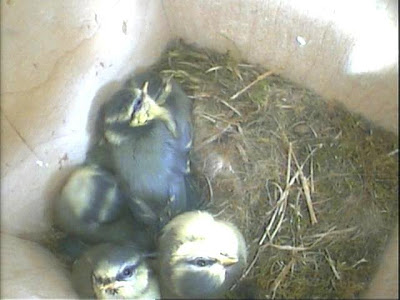 As the sun dipped in and out behind clouds from time to time the light levels changed within the nestbox. The chicks looked like them were responding to this. Mm… or had they just spotted the camera lens peeking through the false ceiling? 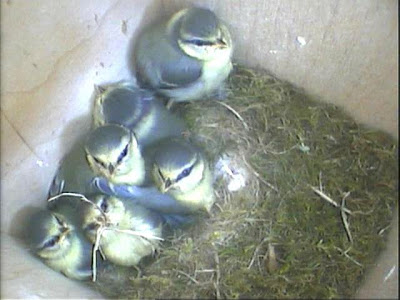 Amusing new behaviour also came when the chicks all started taking an interest in the nesting material. They would pick it up and move it around. In most cases they would also take it from each other too. This little bird didn’t keep this piece for long. I hope I captured good video of this 😀 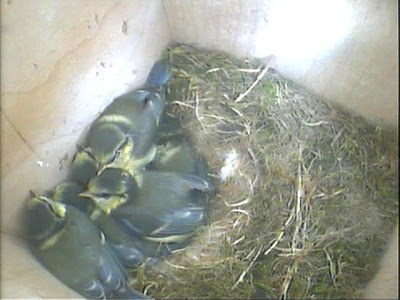 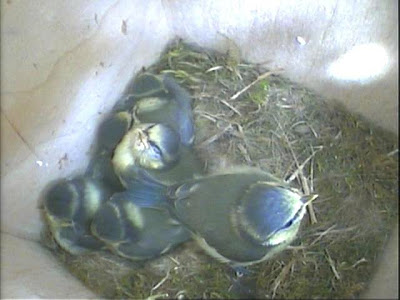 The leader was very keen to know what was going on in the world outside the nestbox and would jump up to the entrance and stay there for a while looking out. Some of the others would watch with interest and the smaller ones didn’t seem to want to know what it was up to. 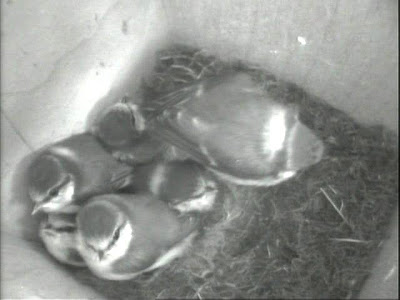 Time past and it was evening now. All day long, outside, we had a video tape recording, stop, rewind and then set to record again to capture the moments of the chicks leaving our nestbox.

The light levels were dropping and the image inside our box was changing to black and white. After the initial ‘would they go moments’ in the morning it was most likely that it could be evening now. Good job as I was out during the middle part of the day. Thanks go here to OH for manning the video camera and keeping an eye on the PC view indoors when I couldn’t xo 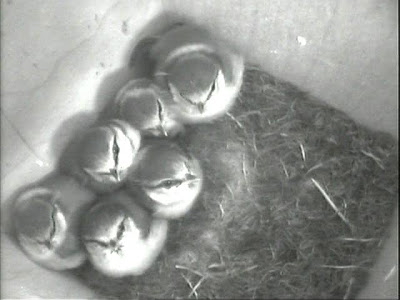 As the evening moved on, the chicks carried on wing flapping, preening, investigating the nesting material looking around and began tapping their beaks on the nestbox walls. Once one started… that they all tried it.

Parents still came in with food and it was getting a bit disorganised for space and tricky for them to remove the faecal sacs on occasions. Funny to watch, but the birds still went bottom up parent there or not and on a couple of occasions another chick removed it! it has been fascinating to watch their behaviour. 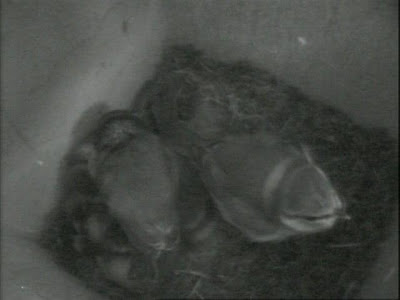 Time moved on and it was past 9.15pm. The chicks now looked like they were getting settled down for the night and weren’t going to go after all. Yep… they kept us guessing all day! However, the leader was still up and down at the nestbox. The rest weren’t really interested in what it was doing any more. 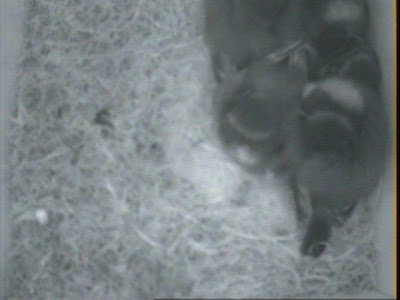 It was getting difficult to see inside the nestbox with this camera so I switched over to the IR one. Just in time too! The leader chick continued to go up and down to the entrance.

Then… one time, as I waited for it to bounce back on down towards the group… it didn’t! I almost wasn’t paying attention either. The rest of the chicks carried on settling down for the night with only one chick appearing to notice what had just happened.

So, there we had it. Our first chick had fledged at 09:28pm on Saturday night and after the guessing day we had had it was pretty much a low key event. I wonder if the parent birds found the fledged chick or it really was out alone all night.

Through my window, I could just see this first chick fly in a first flight fashion across towards my hedge then it turned left not knowing where to go and headed in to my neighbour’s very leafy Cherry tree that overlooks my hedge. It would have given it great night/day cover there so that was good at least.

Chicks fledging at slightly different times wasn’t a complete surprise. I had heard of that. However, I did expect it more to be more a case of the smaller, youngest one to be left by itself rather than one of the first hatched going it alone. The photo above of the sleepy five remaining chicks was one of the last images of our Blue Tit family. 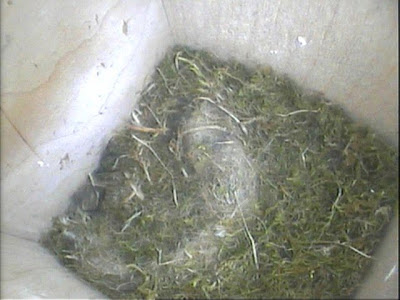 Yep, you’ve guessed it! I switched on my PC in the morning… and the nestbox was empty. I have to say I did smile at this sight. Yes, I really would have loved to have seen the rest of our nestbox family fledge but I was thrilled that they had all survived to be able to.

Looking out my window there were no signs of the Blue tit chicks in my garden. However, I did see one parent take mealworms up to the Cherry tree! I hope that was to the first chick.

The same or another parent took mealworms away in a completely different direction so I’m guessing the family group split up. I wonder if they will every reunite at any point. If they follow their parents (who are still coming back to my garden for food) they just might.

On telling my OH, a little while after this, his response was along the lines of ‘Did they all make it okay?’ and ‘There were no crash landings were they?’ He was suggesting had I looked around on the ground. Oh dear… I never thought of that.

I gingerly walked around the paths of my garden looking into the borders which are pretty foliage full at the moment. Phew… I didn’t see any little blue tits lying on the ground 😀

Photos of our newly fledged Blue tit family out in my garden would have been the icing on the cake to this story but alas no sightings of them yet. However, there was also another Blue tit taking the mealworms from the feeder just before ours fledged. Now, if a family of newly fledged chicks arrive at the feeders I can’t be certain at all that this will be our one. That’s ok. I probably would have been too nervous watching them anyway.

Videos from Saturday? Well, I have quite a few. It has taken some time to select the photos to use to tell stories from the day and videos will be way harder. I’ve a challenge ahead of me there. I kept recording short bursts when the chicks headed up to the entrance, again and again. They will follow later in the week. Thanks to everyone who have followed this story with us.

Tomorrow night, I think I’ll go back to my roots and get back out into my garden with a camera and take photos of flowering plants for Bloom Day. The garden has been growing at a great rate in the time I’ve been watching our Blue tit family. I’m especially loving my front garden at the moment. I’ve got a couple of rather special plants waiting planting in my back garden too.

I hope you’ve been enjoying your garden at the moment too. Last evening, not having chicks to watch, I sat outside from 10:20-11:20pm for the RSPB Make your nature count survey. I wanted to see if hedgehogs were visiting at the time. I sat quietly at my Arbour knowing that bats would pass me by there… and they did. It was so peaceful at that time. A few moths passed by me too and a cat considered it! No hedgehogs though… Mmm… I’ll have work on that. I couldn’t see any sign of a frog at our pond either but… lots of slimey slugs… very tasty bites for hedghogs! However, by next year my new pond (still at the hole in the ground stage) will be overflowing with wildife to watch:-D

11 thoughts on “Nestbox Diary, they kept us guessing”