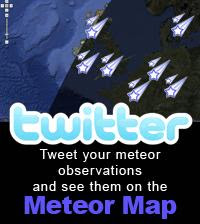 The 2nd Annual Twitter Perseids Meteorwatch sounds fun I have to say. I am planning to look to the skies tonight although at the moment it is pretty cloudy here in Perthshire, Scotland so perhaps I’ll see nothing. I don’t tweet either to join in but if you do you may want to check out the links below.

Just had an extra thought… if any non tweeters and non bloggers want to share sightings please do leave a comment at the end of this post. I know I’d love to hear about them and I’m sure others would too. It would be great if you could give a rough idea of what part of the UK/World you saw the show from too. Perhaps this is the first show you’ve seen or one of many. Let’s chat about it 🙂

You can tweet your meteor observations
and see them on the Meteor Map
which sounds both fun and fascinating.

Perhaps you’re like me with virtually no Astronomy knowledge and might want to browse the meteorwatch website at meteorwatch.org to get some background on this spectacle. Sorry I haven’t given you more warning. On their website they say:

“For the Next 36 hours the world will discover, observe, image and hopefully enjoy meteors, wonders of the night sky and the Perseid Meteor Shower on Twitter.

As well as looking up and enjoying the night sky, you can have some fun and contribute to science, by tweeting your meteor observations so they appear on a map, or by submitting a British Astronomical Association observing form for more detailed observations.

#Meteorwatch has started in the UK and will continue to run around the world closing back in the UK 36 hours later. Anyone can join in and enjoy the #Meteorwatch, no matter where you are or who you are.

@VirtualAstro, @Astronomy2009UK, @Britastro and many others will tweet, so join in, tweet, use the hashtag #Meteorwatch, post images and join in with science if you can and most of all have fun!”

Now… if you are in any doubt about looking to the skies tonight why don’t you view the video below by Adrian West of Newbury Astronomical Society. I’ve a feeling it may inspire you!

Adrian is also the author of the text in grey above and you can follow him on twitter too @AdrianWest.

In keeping with the techy theme and the sky at night I’d like to mention an iPhone app. I’ve been waiting for the right time to drop this one in. After all watching the sky is a form of garden watching. I haven’t used it often but it’s fascinating to be able to stand in your garden and hold your phone above you and be able to see star constellations in position. If you turn slowly around the image on your screen changes too!

For a novice like me, the app ‘Star Walk – 5 stars astronomy guide’ is great fun. Lol… I just need to get off my blog in the evenings and get outside to use it more! Now, at £1.79 I think it’s a great buy too but don’t take my word for it. Please read the reviews first… 5½ stars it gets!

Looking around quickly (want to get this posted before it gets dark) for any apps on the meteor shower and I came across something on the wikiHow website that caught my eye: “How to Watch the Perseid Meteor Shower.” I found the article describing the shower very interesting. They say:

“Each year, the Earth passes through the debris of a comet called the Swift-Tuttle. This debris burns up in our atmosphere to form what we see as meteors or shooting stars. The Perseid meteor shower is at its peak during mid-August, with the peak on the night of August 12 and morning of August 13 in 2010. During a peak, at least 50–60 meteors can be observed during each hour. Considered the best and brightest meteor show of the year by many, it’s a great opportunity to go outside and check out nature’s own dramatic show.”

Finally, not having a ‘real’ compass to find the north eastern sky (to get the best chance to see the meteor shower) or the iphone version that has a compass included I’m going to use a another tech solution. I’m going to locate my house on Google maps and see what it comes up with.

Location sorted (roughly) all I need now is to set an alarm on my phone for around midnight and have my coat and shoes ready! I don’t intend to join those to those who will still be up watching until dawn tomorrow. I’ve a feeling it was after 11pm we saw the shower last year. I’ll maybe pop out around then and if its still cloudy I’ll consider my options.

Happy sky watching… oh and remember to tweet what you see if you are on twitter. If you are a bloggger then I look forward to seeing any photos if you are lucky enough to get them.

Have fun however you watch the shower… the reality is no tech solutions are really required. All you need to do is wait until it gets dark, hope there are no clouds, have a bit of patience and use your eyes.

Phew… got this posted before it got dark… sorry I’m a tad late. Wishing you a great weekend 😀