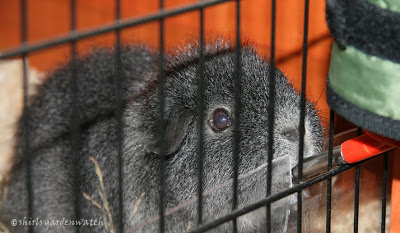 For sometime now I have wondered this. At this time of year with the garden full of lush foliage the reality is that hedgehogs are very well camouflaged. Being predominately brown in colour they blend in beautifully with any exposed soil below plants.

During the day we can see that our garden plants attract many insects as they hover and flit above them. As day turns to night the evening shift at ground level is not as welcome! Hedgehogs are our nightshift garden helpers being attracted to the army of foliage feasters on leaves such as hostas.

Yep… the garden slug dines on the hostas in our garden beds as we sleep in ours. However, in the cycle of our natural world, they in turn become a meal for the hedgehog. So how can we tell if our garden slug offer of ‘eat all you can for free’ gets any takers?

Let me reintroduce you to Dora, my daughter’s guinea pig seen two nights ago drinking from her water bottle…

Lol… no, she didn’t tell me 😉 However, back in August 2007 when I went out one evening after dark to put down the cover on her hutch (located at my back door) I nearly stood on one! That was my first sighting. So Dora, and her then companion Eliza, indirectly introduced me to my first ‘know of’ hedgehog visitors. 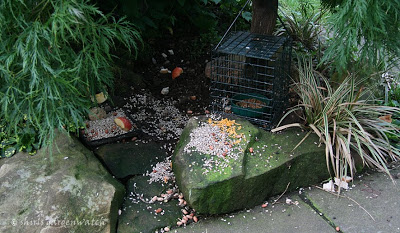 So how do you know if hedgehogs visit your garden (if you are in a part of the world that they can)? Well, at a guess if you have lots of plants covering the ground be they neat and tidy or even just long grass then that might make it a possibility.

Add that to bird feeders in your garden with the spill of seed on the ground below and that further adds to your chances. However, being able to see hedgehogs when they visit is a whole different game. Hedgehogs are nocturnal and basically they will wander, eat and nap throughout the night.

For any new visitors to my blog, being completely unfamiliar with this wonderful garden creature back in August 2007 I found myself reading up about them. I was interested in what extra foods I could provide and found they enjoyed dried sultanas, unsalted peanuts (sometimes I crush them), dried and live mealworms.

I have also tried a variety of dried hedgehog mixes bought from shops and even tried dried dog food as suggested by others. However, it always gets left and I only end up throwing it away. I do know cat food is enjoyed by hedgehogs but having a good sized bird population with a variety of species and lots of juveniles at the feeders I don’t want to attract any more than already visit. 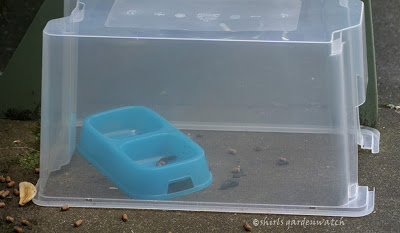 After my first hedgehog sightings, I quickly made a feeding station out of a simple (almost transparent) plastic storage box by cutting an entrance 13cm x 13 cm at one end and then turned it upside down. I added a pet dish to the end away from the entrance and placed this near my back door where the hedgehog had been first spotted. This was a great success and I especially liked to see it being used on wet nights.

You can imagine my excitement after seeing the image above the next morning when I looked out my window. This was clear evidence that there had been some hedgehog activity… the biggest clues being the messy state they left things in and droppings! Now, I knew what the dropping looked like I could tell if hedgehogs had passed through my garden 😉

If you were considering setting up a hedgehog feeding station of any kind I would suggest you locate it along the edge of some thing like a house wall or fence. I’d also strongly suggest you positioned it so you can see the hedgehog using it from a window. They are fascinating to watch. I found myself trying to film them with my video camera before eventually moving on to night cams out in my garden. 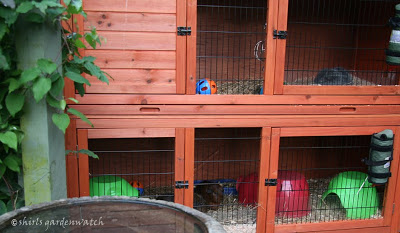 This evidence of hedgehog droppings has been missing from my garden this Spring/Summer. I have been considering if perhaps the guinea pig hutch at my back door (there April-October) which made me aware of hedgehogs in my garden are now keeping them away. Could the new family in the bottom floor be too noisy perhaps?

After the humble beginnings of a plastic box feeding station I converted the original plastic single storey guinea pig/rabbit hutch into a larger feeding station with an area for hedgehogs to have a night time nap too. I renamed it Hedgehog Manor.

This worked well but with limited space at my back door it was relocated to a position under my Pergola where it could remain all year round. Given a bit of a makeover of a green roof to make it blend to more with the garden the waiting game began. I have waited, filled up the feeding dishes, refreshed the water and waited. Our last sightings were in March.

The birds found this secret hideaway and the food has not gone to waste 😉 I knew relocating a feeding area was going to be risky. On the positive side, after the snowfall of last winter, this will make a good covered bird feeding area over the winter. I have consoled myself with that.

For new blog visitors, my daughter made me a Hedgehog House (school exam project) for hedgehogs to hibernate in. I put an IR camera in it and secretly hoped we might see a Mum raise her family in it this summer. Alas, no visitors there this year either. I tried different locations too. On the positive side there, I had a camera I could now relocate to inside Hedgehog Manor… 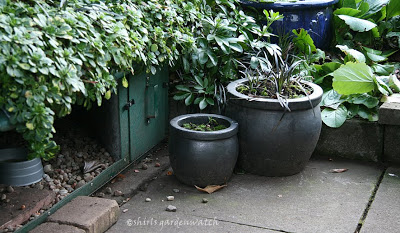 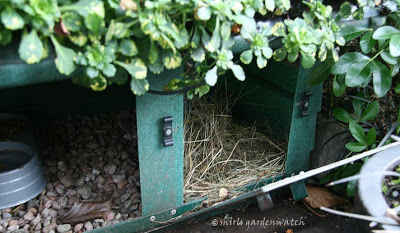 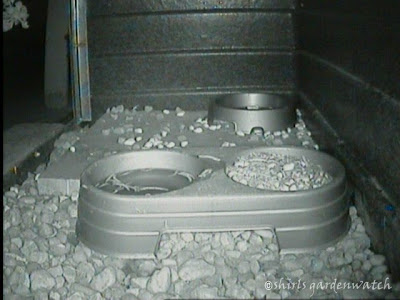 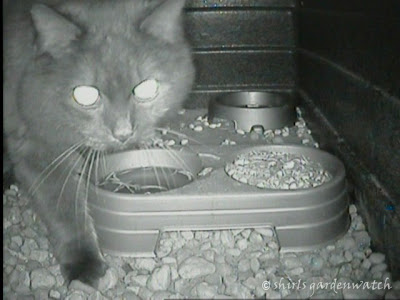 Lol… yes two nights ago when I was capturing photos late in the evening (for this post) I did get my fourth sighting of activity inside Hedgehog Manor! Local cat, Edmund, looked like he was making his first visit… as explored all the way right to his nose at the camera!

Mmm… I have a feeling Edmund and perhaps other passing cats have been interested around the Manor for the past week at least. Can you guess? Yep… sighting number three inside the Manor was a little mouse spotted running around and hiding under the food dish. So the locals are visiting?

Yep… sightings number two and one were slugs and the daddy longlegs! I can’t make them out but I guess there are spiders too. Argh…. both give me the shivers to watch with the slugs going up and down the inside walls and across the food dishes. Some have been seen in pairs too… perhaps mating but I couldn’t watch.

The daddy long legs just stretch out over everything. Can’t be sure, but a slug was seen last night with a daddy long legs then… would slugs eat them? I shivered for a while at the thought.

Actually, my numbers are way wrong now as last night I saw my first snail crawl up the inside wall of Hedgehog Manor too. Yes, lovely too… not! I nearly stood on it as I went out in the dark with a torch to add some dried mealworms to the dish.

The wonderful thing for me about writing blog posts (I have said this before) is that you don’t know where they will lead you. Apologies once again for chatting on… I did plan this to be more of a photo blog with brief captions to tell the story of gardenwatching with a particular message for its ending… patience. 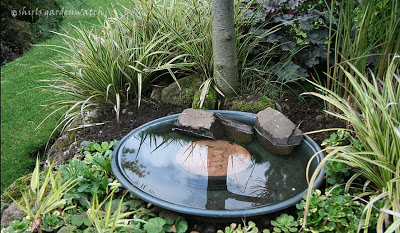 I have really missed seeing the hedgehogs visit my garden since March. I wanted to give tips and hope for others that they may be able to see them too. One huge tip I was going to give was that of a dish of water. In areas of drought that may just be a life saver for hedgehogs when supplies of slugs will have been short too. 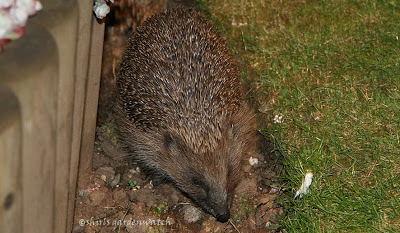 Another observation I have made about hedgehogs visiting my garden is that they seem to happily follow edges. In previous years I could work out the routes they took around my garden and would leave food/cameras there with success. 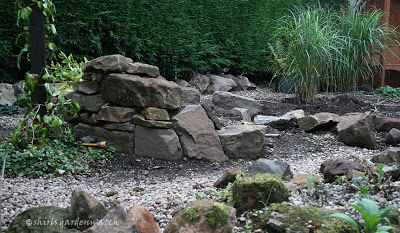 I began to consider my new pond area with its half built wall and large stones running the length of a strip of my hedge. This area has changed slowly over the summer so perhaps this has made following a route through it difficult for passing hedgehogs. However, once completed this area will indeed be a landmark for them.

Please note there is added background music in this video.

In absolute honesty this is for real! Last night at just after 10.30pm I was about to switch the PC off for a while to watch something on the television with OH (with plans to come back to writing this post). I turned to look at the monitor and couldn’t believe my eyes…. I was watching my first sighting of a hedgehog dining inside Hedgehog Manor.

What incredible timing. Needless to say I didn’t watch the television screen then. I’ve been waiting a while to see this. I write a ‘don’t give up’ post on gardenwatching and the wait is over…. Fantastic!!! I’m almost tempted to change the title of this post now but I won’t. What incredible timing indeed 🙂 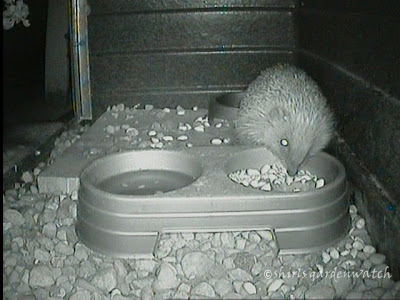 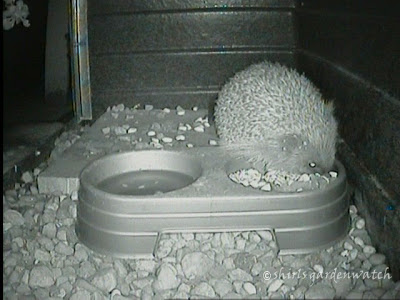 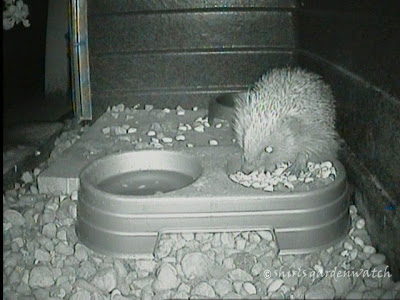 The images above show the hedgehog searching into the dish of food. Dried mealworms had been there the previous night so I guessed it may be looking for them. As mentioned above I went out and added some more.

I was lucky enough to see this hedgehog return for a helping of seconds last night. It was easy to recognise as unfortunately it has rather a lot of ticks on it. You can see the white dots about its face and along the ear but the video shows more on its body too. Poor thing.

So that’s us, part-time blogging break for the summer over now. Got lots of stories, but just have to find a quicker way of telling them… for you and me! Latest garden mystery is a new bird visitor… only fleeting and ID is tricky. In the plant world I have another flowering out of season… a Hellebore. We’ve been and about at Reserves and on Garden Visits and look forward to sharing them too.

Looking forward now to catching up with everyone. Wishing you all a good weekend 😀

Regular readers will perhaps have noticed I have put copyright on my images. There’s a story there which I’ll keep for another time.

15 thoughts on “Are hedgehogs still visiting?”