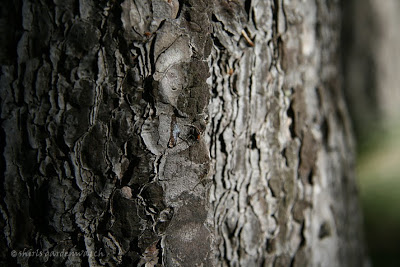 … seals and fungi. Destination: Tenstsmuir beach and forest on the east coast of Scotland, just north of St Andrews in Fife. Yesterday, after an enjoyable late lunch at the picnic area beside the car park we headed through the forest…

Dabbled sunshine highlighted sap running out a mature pine tree and before we were even out of the forest car park my camera was out! You’ll see the sap by clicking on the photo above to enlarge it.

Following the path along the edge of the forest we saw butterflies (peacock and small white) and a common darter dragonfly. We were also seeing fungi, plenty of fungi, although I felt a little sad to see so many with their caps on the ground. I’m guessing people and animals walking by probably knock them off.

Fungi is not my area and although I did buy a pocket book for ID last year I really had no idea if what I was looking at was special or not. My photos are of the fungi that caught my eye on this visit.

In an effort to shorten postings a little, but at the same time share as many images as I can, I had fun with Photoshop6 for a while today. I don’t use any plug ins for creating images so it is case of experimenting with the settings and hoping I can repeat them for another time! A notebook is always at hand 🙂

The montages below will enlarge bigger (when clicked on) than the single photos so you can see the detail of the fungi. Sorry I have no ID’s here… suggestions are welcome 🙂

In the first montage below, I was trying to show that even in the sunnier parts of the forest you can easily walk pass fungi as it thrives in the moss and under blades of grass. I tended to notice the fungi more when it had nibbles out of it as the white would catch my eye. 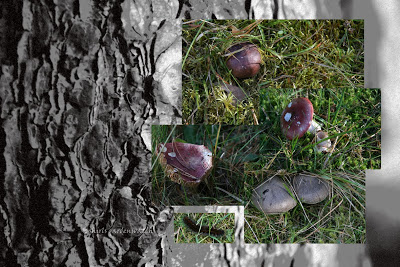 The caterpillar shown in the image above was out in an open area of grass along the edge of the forest and my daughter did well to spot it. I might take a guess that this could become a peacock butterfly.

In the second montage below the background image has my daughter and husband walking in the distance. I wanted to show that throughout the darker parks of the forest fungi did bring colour with many different shapes and clusters too. Once again the nibbled fungi caught my eye. 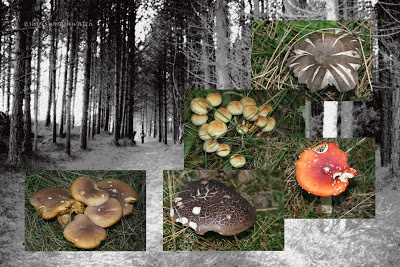 On our visit on Saturday we followed the weaving, sandy paths on the edge of the forest too. Initially I thought this scattering of fungi shown below were stones on the sand. Practically no stem was visible however a few nibbles were and that made me take a closer look. I was surprised to see them growing in this sandy area. 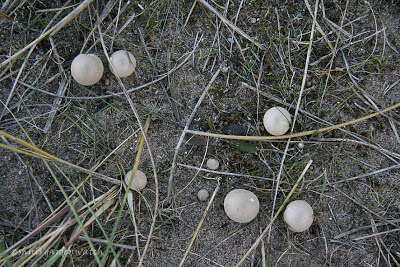 Walking towards Tentsmuir Point and the beach (to hopefully see hundreds of seals basking on the sandbars) was where we were heading now. As it was getting late we decided to head out of the forest and try a quicker, more diagonal route across the many sandy paths… 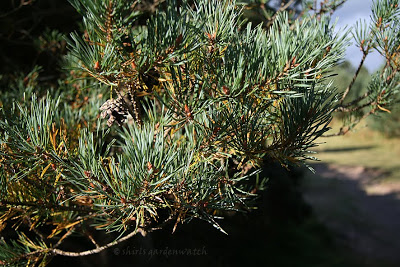 Ah… we could just see the sea in the distance now. 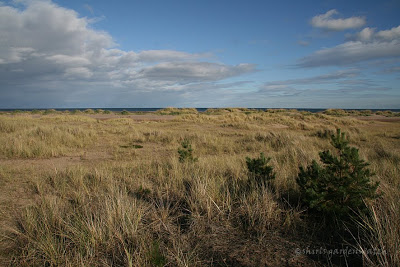 Oh… were did it go? Don’t you just love the mood that changing the ratio of sky to land can create? I love the image below. 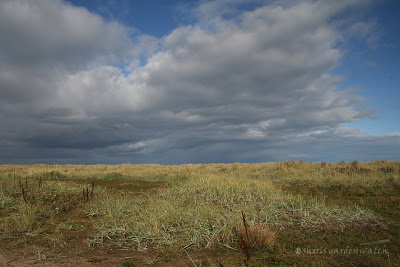 Finally, we could see the sea and the sand bars. We were out fully on the sandy beach now with scattered shells underfoot. The wind was blowing up the sand now too so just one photo here. 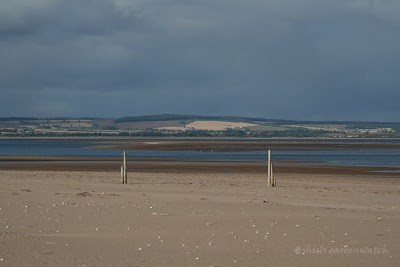 The video camera would have given a closer view but it stayed in my bag. Instead we looked at the seals through my compact binoculars. We could see some white seal cubs as well as the adults. You’ll only see the seals as dots in the photo above. They are in the middle of the photo on the darker brown strip of sand.

It was time to head back to the car park now. We took the shortest route back towards the forest talking care over wetter sand. Although I didn’t get the video footage of the seals I hoped to get we did see them in the distance. Maybe had we been there earlier and the tide was further out we could have had a closer view but you are advised not to get too close anyway. 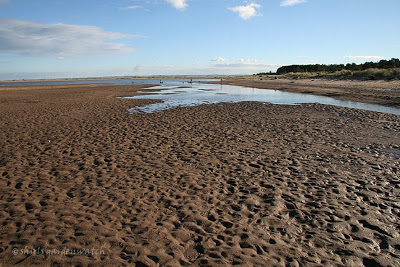 On our walk back through the winding forest paths I spotted the fungi below. This was my favourite one of the day. I’ve no idea what it is but I loved the way it was growing out of the base of the tree stump showing the cycle of the nature with new life coming from old. 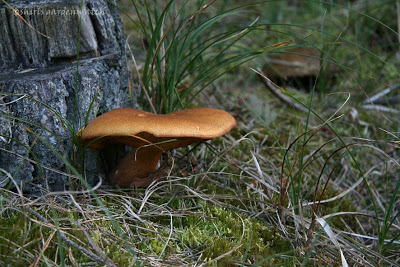 So with September past the midway point and the days getting cooler I’m wondering if you’ve been out wandering this weekend too. What have you been hoping to catch sight of?

Funnily enough in a search for links I discovered another blogger was visiting Tentsmuir on Saturday too. You can read of Juliet’s (aka the Crafty Green Poet) visit here. I’ll need to pop over to leave a comment now 🙂

Oh wait just 42 seconds more… just thought on doing a YouTube search for seals at Tentsmuir/Kinshaldy beach and found the video below taken back on 29th September 2007. Lovely footage here. I did enjoy seeing this much closer view. Enjoy…

Guessing we’ll have to go back again now 🙂

17 thoughts on “Wandering, hoping to catch sight of…”