Although Starlings aren’t always welcome in the garden due to their greedy, noisy manner they are endangered here in the UK so I’m delighted to be able to submit numbers for them. Sultanas and mealworms brought them swooping down to feed during my count. I knew it would attract them if any flew over.

Clicking on image will enlarge it
Being honest, it took the Starlings a bit longer than usual to spot the food I had put out with them in mind. In the past it has never ceased to amaze me that within minutes of putting out sultanas Starlings appear. Sultana Satellite tracking perhaps?

Thanks to Mrs Sparrowhawk respecting my request to stay away during my count a respectable 11 species of garden birds were spotted. Numbers weren’t particularly high (but as many others find too) this seems to be the normal for this count. Comments in my last post have raised speculation that the birds are working the system here 😉

The RSPB are expecting a wide range of bird species this year as the colder weather has been bringing new visitors to our gardens. However, with our snow gone and temps chilly but not freezing for the moment we are back to the usual suspects in my garden.

No sightings of Fieldfare, Tree Sparrow, Long-tailed tits or Blackcaps have been spotted since last winter. Bramblings had joined the Chaffinches (this year for the first time) when it was cold and snow covered the ground but they no longer visit. We even had a Reed Bunting pass through.

Having had a hectic weekend, spending an hour by the window was bliss! My only available slot was Sunday from 2:15-3:15pm. There was a slight breeze, the skies cleared to blue and when the sun came out I knew the birds would more than likely enjoy the sun’s rays from my neighbour’s cherry tree rather than rushing around my garden for food.

Appearing on the branches of my pine tree next to a peanut feeder, I was delighted to see a Wren. It has never been in my count before. I went for my camera but a Blue tit arrived at the feeder and the Wren flew off again. You can see the rest of my stats in the image above. House Sparrow numbers are a lot lower than usual and it’s weird to be seeing a single Goldfinch regularly visiting.

Later today, I’ll submit my count results here and when the 2011 RSPB Birdwatch results come out in March I’ll add a link here. If you have taken part (especially for the first time) I do hope you enjoyed it.

Finally, if you are a visitor from the USA you might like to know about a bird count there in February. I’m guessing most visitors here know and take part with this but just in case you don’t, the next Great Backyard Bird Count is during February 18-22, 2011. 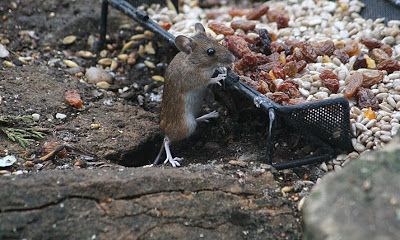 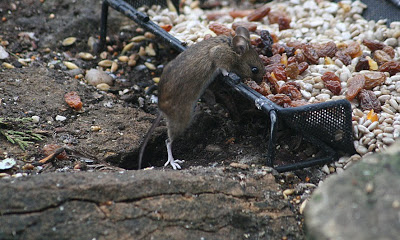 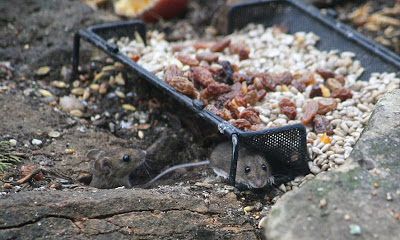 Throughout the time I’ve been writing this post I’ve been distracted by mice around my small rock pool pond. Three have now been spotted running in and out the caves there taking food from the bird buffet.

The photo I’m really looking for is one with a Blackbird and a mouse feeding at the same time. I’ve seen this a few times, it does look funny but not as funny as a mouse trying to move a fat ball towards itself. Just where did it think it could roll it to?

9 thoughts on “The Starlings have it”