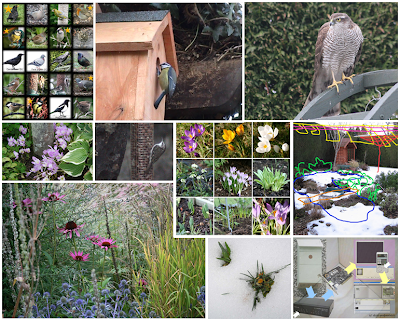 Don’t worry… you haven’t been dreaming it’s only the 1st of the month 🙂 I’m on a waste not, want not theme. Trying to keep my pledge on shorter postings (for me) and not wishing to leave this on the internet cutting room floor I thought this would be a different take on a review of the year. Twelve montages were completed for a Review of 2010 but time and words ran away from me last December.

So here we are at the beginning of February 2011, although it is a bit breezy out there we have blue skies and sunshine. Yay!!! There is still no snow on the ground although I have heard whispers of some on Thursday. I’ll pretend for now that I haven’t heard that 😉

My garden is beginning to show signs of new plant growth and the Spring to come. Bird feeders are swinging in the breeze this morning but my garden is spookily quiet. Mm… looking at my review below I wonder if there’s a pattern here.

Montage of images from February 2010.
Clicking on this image will enlarge it

February 2010 began with my stats for the RSPB Big Garden Birdwatch 2010. Observations of a Coal tit hiding sunflower hearts were seen. A snow covered garden returned. For a welcome break I took myself/everyone back to warmer days and a garden visit to Cambo during the previous September – albeit virtually.

I can see now that there is a pattern here with other bloggers doing the same at the moment. I have been enjoying winter garden visits by bloggers just now too. Although, I don’t have snow on the ground and if I did it would be summer visits I’d enjoy more.

Our Cambo virtual garden tours began with Autumn crocus, went on to a cut flower area before finally stepping out on to an American Prairie for a Cambo weekend of garden images.

Returning to my own garden again, the Spring crocus planting in my lawn had shown some colour with their flowers only to be covered again in snow. My February GBBD posting showed plant winter casualties too. Shame, I lost my Rosemary and Sage plantings that I’d grown from cuttings.

Already I am seeing crocus and Snowdrops in flower in other blogs but we will be later in the month and into March before we’ll see this here. Last year I discovered a new love for crocus. As for plant losses, that will be known by the end of this month. Many shrubs have suffered broken branches with the weight of snow there was on top of them.

By the 3rd week in February, we had seen the first interest in our new B&W camera nestbox and (not so good for the birds) we were seeing regular visits by a female Sparrowhawk. The garden feeders had become a nervous place.

Wonderfully this B&W camera nestbox has had a Blue tit roosting in it all winter. Even better this morning I’ve just seen a pair inside (too late to get video footage or a pic). I’ll need to keep an eye on this box now. I see last year at this time we were seeing many more Sparrowhawk visits. I wonder if they visit gardens more at this time of year.

Sharing the technical stuff I’ve picked up whilst blogging seemed a good plan (it would have been of interest to me). I’ve been asked a few times about my camera to video set-up. February saw the start of my Tech Tuesday postings. I hope to post more regularly on this for 2011.

I’ve yet to get this idea properly off the ground but I do have some posts partially written and still like the concept.

February also saw a tripto fav SWT Reserve Loch of the Lowes where interesting video footage of a Treecreeper on a peanut feeder was captured.

Note to self: Renew our membership of the Scottish Wildlife Trust before our next visit and experiment more with the settings on my new video camera 🙂

At the end of the month, I decided to join other bloggers for an on end of the month posting with views from my garden where I included some sketched out thoughts for my new pond build that was still at the ground clearance stage.

Oh dear… another couple I failed to follow through. This year will be the year to complete my pond. There I’ve said it! I guess I’m stalling parts of it as I am frightened to fully commit a permanent area of this scale to my garden and I’m a tad out of my depth on how to best do this. Perhaps if I took this area for an end of the month review that would push me into achieving something with it. That’s a maybe then 😉

So that’s it for February 2010 and onwards we go into February 2011. In my garden I can expect love in the air with visiting birds as many pair up and start looking for nesting sites.

Valentine’s Day will see the start of the BTO’s National Nest Box Week so for any budding DIY nestbox makers out there that could be a good goal date for you. You can get plans/instructions on how to build one from the BTO link if you don’t have any.

Swoon… yes love will be in the air in the plant Kingdom too… bring on these crocus, snowdrop and snowflake flowers. Wishing everyone a very Happy February 😀