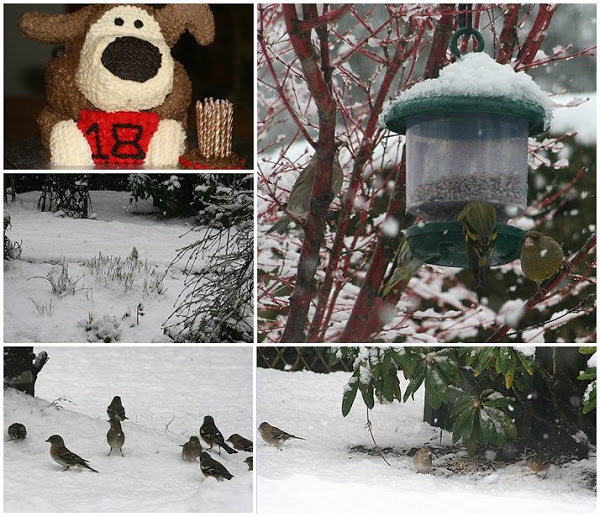 …to the middle of the month with ‘Boofle’ in birthday cake form, sunny mornings, blue skies, first flowers opening, a snow covered garden, flattened flowers, grey skies, heavy rain, an invasion of Finches, recovering flowers, new shoots through the ground, a lengthy visit from Mr S. and short ones by Jack Frost . The cameras have been recording…

However, this post would never upload if included all the images that I’d like to share. Plants, birds and wildlife are all kicking into action for 2011… and the outdoors beckon us.

Here’s what’s been going on in my small Perthshire garden. I’m going to try and keep this brief so you’ve got time to view the videos and I’ve more time to visit you 🙂 Note there is background music with all videos.

By special request I made my daughter’s 18th Birthday cake – I should say it was a tad scary when I stood in front of a six cakes high tower and made my first cut!

It was also scary that our youngest was 18 and how much snow we had covering the garden the next day. Earlier that week we had seen plenty of sunshine and warmer temps.

On the positive side of the snow covered garden the Bramblings returned with good numbers of Goldfinches and Chaffinches. There were Siskins and Greenfinches too. However, the food kept getting covered so I opted for putting some under shrubs.

My Snowflakes were covered in snowflakes as were the first flowering Crocus. I was especially sad to see the tight, deep pink flowers making up balls for the drumstick Primula’s completely covered. Signs of Spring were temporary cancelled.

The next day, it was all change in the garden again. You could be forgiven for thinking we were having April showers. It rained and rained.

However, the Crocus in my lawn that hadn’t opened their flowers looked quite happy in the rain. The Snowflakes looked so shiny new that they almost looked like plastic. I took these photos (with a flash) at the end of that day when the rain finally stopped.

Allium leaf crowns looked like quite tropical on the ground as did the Hellebore flowers. Regular visiting birds like the Blackbirds finally managed to get to the feeders then too.

That rainy Sunday was even busier for the bird feeders than the snowy one… not possible you’d think? Well, as they say… expect the unexpected… especially when gardenwatching!

March the 13th was definitely not an unlucky day in my garden. It gave way to a sight I have never seen before. It was fascinating to watch. I had no idea where to look at times. Lol… it wasn’t raining men… it was raining Siskins 😉

For those that don’t see Siskins, the short video below shows a female on a peanut feeder on the snowy day and a group of male Siskins at a feeder on the rainy day. They are tiny little birds although quite feisty too.

Now… the tree in the next photo below is one that has appeared on my blog a number of times. It is a very large mature tree that I can see from over the hedge in my garden.

The last spectacle from this tree was groups of Waxwings back on the 13th of November. The number 13 doesn’t appear to be unlucky in my garden it seems 😉

As you might expect, later on in the day at this time of year, the sky was dull. The image of the tree isn’t the best but was taken for reference. The silhouette shows the dots (which are Siskins) on the top branches.

Now… take a look at what happened next…

For those that can’t view the video above, the Siskins leave the distant tree singly and in good sized groups and make their way to my garden and feeders. I’m guessing since my neighbour has just pruned his Cherry tree my garden is more visible from a distance.

Oh… what a pity the Cherry tree wasn’t pruned at the time of the Waxwings visiting the area. There are other mature trees to the left of my garden and between the two I’d take a guess that there were a good 100+ Siskins leaving them.

Once a few Siskins took flight, others joined in and the large group began flying together. With the group becoming big and the space in my garden where the feeders were quite a narrow (being between the House and our Leylandii hedge) the birds were having trouble landing at times.

They then began to circle above my garden and house. With every loop they circled it got wider and then more birds joined in. It really was fascinating to watch. I failed in following the groups moving in the sky and opted to set the tripod (at my window) on one position and crossed my fingers.

I was lucky and managed to capture the essence of this wonderful sight – they did land eventually too! Wonderfully, this sight lasted a few days although I was getting a tad worried about my neighbours possibly getting bothered by this. The birds were quite vocal too.

I’m guessing you’ve spotted Mr S. below. A few days later and once the very large group moved on, but there were still a good number of finches visiting, and the rain returned… Mr Sparrowhawk made a very polite appearance. 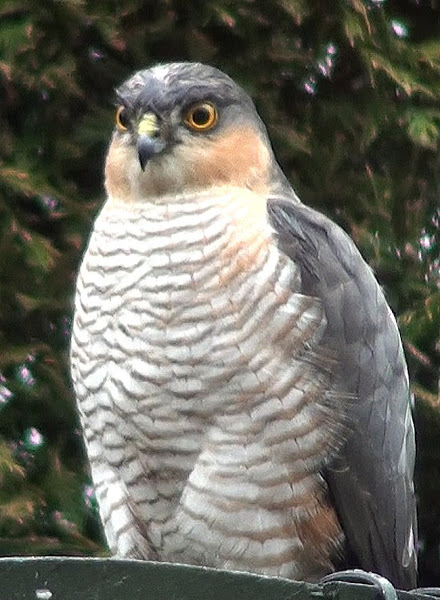 Screen grab from video below

He stayed in the same spot for over 10 minutes too – on the Arch holding the bird feeders seen with the male Siskins above. It was raining quite hard. He gave his head a good shake on a few occasions to get rid of the wet. I’ll let you take a look…

Once again, I found this a fascinating sighting in my garden. I was particularly transfixed by those eyes of his. He didn’t dine in my garden on this occasion 🙂

A few days on again and it was all change once again and we had a few frosty mornings. The montage below was taken on Friday morning just after I had topped up the bird feeders.

Over the weekend I thought we’d see our first daffodils opening their flower buds. Odd tete a tete ones have now opened but I’m looking forward to the return of Ice Follies 🙂

I’m also looking forward to the return of hedgehog sightings in my garden in the evenings (food now available at Hedgehog Manor) and more daytime visits to our new nestcam box for 2011. You can see it in the photo above.

You can also see that we have boarded up or original nestbox that had a successful brood of Blue tits fledge last year. Now… that’s another story 😀

This post was written by Shirley for shirls gardenwatch in March 2011.