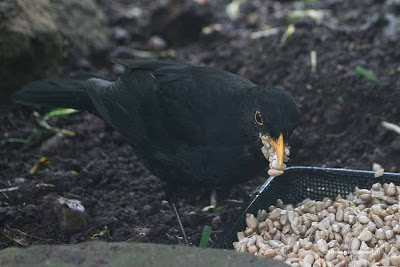 Although we are into May and the snow and cold are almost a distant memory our garden birds need us to put out food more regularly now than ever. In reality… if they could ask themselves I’d say they’d request more please 🙂

Pre blog I really thought it was just during the cold months they needed the extra food at our garden bird feeders and tables. However, after a few years of watching the garden I now know to expect to go through a lot more seed at this time of year when nesting is in full swing.

Yes, and I guessed Blackbirds would be the first to collect seed in beakfuls! I have seen at least two different males take advantage of the most popular food to go in my garden… sunflower hearts.

Having a fast growing, noisy crew back at the nest it isn’t surprising that Blackbirds (especially the males) can get quite aggressive over their finds of food. I tend to put out smaller amounts of food in a few new/different spots so there’s enough for everyone. Hope that helps 🙂

Just as the new arrivals of Blackbird juveniles arrive in the garden (where they will still demand to be fed for a little longer yet) I expect to see the Starlings going away with beakfuls of sunflower hearts for their even noisier crews back at their nests.

House Sparrows can’t be far off bringing their chicks to the feeders too. They will give them sunflower hearts too but I have seen them favour the other energy rich food of fatballs too. I’ve just spotted one looking at my cage for them.

I should probably put fresh fatballs out and mix up the arrangement of my feeders to spread the birds arriving at them out as that helps in periods of high demand! It also gives new birds passing by a new chance to see them too. However, the regular birds can need time to adapt to the new arrangement but I’ve a feeling they will do so very quickly just now. 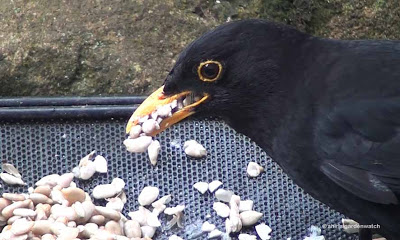 Also looking out just now I can see that it’s time to refill the ground feeders for today. Being honest, I’m looking forward to the arrival of the new 2011 Blackbird arrivals. I do have a soft spot for them. I wonder how long they will be in coming here.

Being equally honest… I can’t say I’ll be looking forward to the Starling arrivals. However, they can be quite entertaining to watch. Of all the parent birds that visit my garden, I’d award the Starlings the medal for effort in parenting and without a doubt they really need the extra food to help them with their chicks.

I’m guessing there are chicks already arriving in gardens in other parts of the country/world. Which ones are arriving in your garden just now and who would you give the parent medal to?

Finally, regular blog visitors might be wondering about a Blue tit diary for 2011. There isn’t yet a story to tell for this year but it doesn’t look likely. However, I have found with my gardenwatching for the last few years. It’s not over… until it’s over :-))