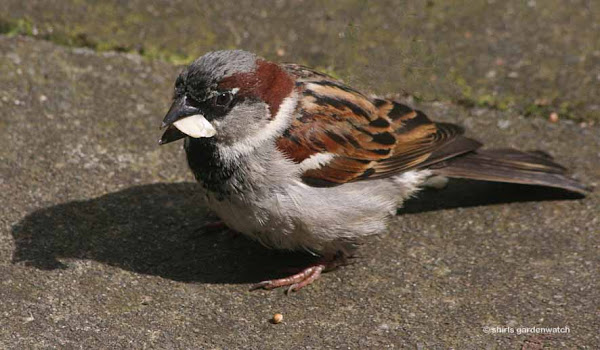 Results for the RSPB Big Garden Birdwatch for 2011 were published back in March. The graphic way the RSPB have chosen to illustrate and compare the stats makes it a good read too. You can get the full PDF list here. Although a tad late, perhaps this is a good time to be posting this 🙂

Since writing this garden, bird and wildlife blog I have taken part with a count. On posting the results each year, I now have stats for the last five years of this survey which you can see below. I’ve always found the comparisons interesting and perhaps you might too. But first, do you feed birds during the summer months?

Since March our garden birds have paired up, nested and brought their young to our gardens. Back in January, everyone was being encouraged to put up bird feeders prior to the count – held annually on the last weekend of January.

Now, with us in full summer (although it doesn’t always feel like it) leaves on trees and shrubs can make seeing the birds visiting our gardens a bit more tricky. In reality many parent birds will be hiding their bedraggled look of worn feathers at the moment.

However, birds are still visiting our gardens and will definitely appreciate food at bird feeders during this time of year too to get them back to full health again. Some birds do have more than one brood too.

Feeding young is tiring work for the parent birds and if food at feeders is not suitable to take back to their young than it certainly will fuel these hard working parents so they can find some.

I’d take a guess that our summer bird feeders do contribute greatly to numbers of garden birds in counts for the RSPB and in other surveys. If yours is packed away in the shed until winter, do consider getting it out again 🙂

I have mentioned this before, but pre blog I really didn’t think birds needed feeders during the summer. I was wrong.

Since continuing to feed the birds in my garden throughout the whole year I have definitely had the reward in seeing an increase in birds and species to my small garden. There’s also the bonus of seeing so many newly fledged birds which is both a delight and fun to see.

It’s great to see the House Sparrow give a good increase in numbers this year. You can see from my stats above that this bird is creeping up towards numbers back in 2007 which is brilliant news for a bird that is on the endangered list.

The House Sparrow has continued as top bird seen in UK gardens. In fact the top six species of birds seen in UK gardens this year has remained unchanged except for a swap around with the Starlings and Blackbirds for 2nd & 3rd place.

Starlings, another species on the endangered list, have returned to their 2nd place slot which they have held for 4 out of the last five years. However, once again the really good news is that their slowly decreasing numbers over the last four has seen a significant increase this year!

Starlings have actually shown a bigger increase in numbers for 2011 than the house Sparrows… aiming for top spot for 2012 maybe?

Sadly, this year we didn’t get any Blue tits nesting in our boxes with cameras. That was a shame, especially when I was testing out a new one for someone. Although on the positive side we have seen a young family arrive at the feeders and now see them regularly.

Wonderfully, last year we saw our first brood of Blue tits survive (via nestcam box see diary with pics and video here) so I’m particularly thrilled to see a good increase in numbers of Blue tits this year despite them holding on to the same 4th spot that they have held for four consecutive years now.

As you have seen, I have chosen to illustrate my list to show where a bird has been placed over the last five years. Perhaps I should explain what’s going on with the Goldfinch entry – it’s all about 10th place which wonderfully for the Goldfinch it is no longer in 🙂

The Goldfinch has charmed its way up to 8th place this year! It has been outside the Top Ten for two of the last five years and taken 10th spot in the other two years. I have added who took 10th spot for the years it didn’t make the Top Ten. Sorry, if this has been confusing.

My garden has seen many Goldfinches visit this year and throughout the winter. One brood of young has come and gone at feeders with many becoming regular visitors. I’m pretty sure more than one family has visited too. I am expecting more new broods to come so it is no surprise to me at all that this bird has moved up in the stats.

Jumping back up to 5th place in the 2011 RSPB Big Garden Birdwatch and we have the consistent Chaffinch which has held 5th place for the past 5 years. That’s its UK place, but here in my part of Scotland it takes top spot again. That doesn’t surprise me either based on my garden visitors.

I’ll not go through all species in the list above but will end with 10th place and a mention of the Collared Dove. Although it has only dropped from 9th spot last year back in 2007 it was in 6th place so it’s maybe one to keep an eye on.

The date is already set for the 2012 Big Garden Birdwatch as Saturday 28th/Sunday 29th January. Until then… enjoy feeding and watching the birds that visit your garden 🙂