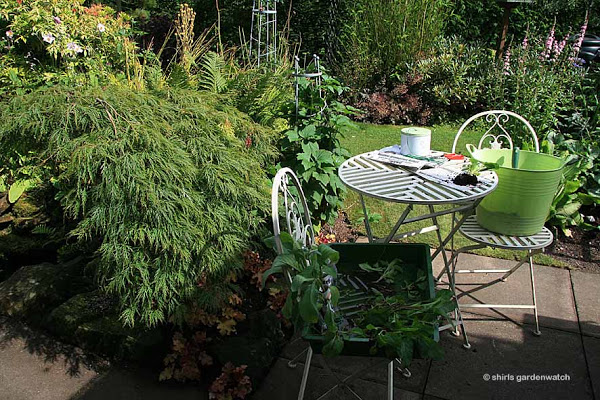 Car boot itinerary: a half moon (lawn edger – but not for lawn use); two watering cans (it isn’t always raining in Scotland); a garden trug; hand tools; a small bucket of self-sown young plants with water at bottom; gardening gloves and boots. Oh yes… and my small (well used) sack trolley to carry everything from the car park to the garden in one trip 😉

A new bag of compost had been opened. A newspaper had been cut into strips. String was cut into measured lengths. A shallow tray had water just covering the bottom. Self-sown seedlings from my garden (with roots in the water) waited in the departure lounge in preparation for relocation.

Meanwhile a few metres away… leaning on a house wall there were 12 paving slabs waiting their turn for our attention. Let’s just say some relocation of older slabs was necessary and the new ones needed to cover that area. Not exactly fun garden work for a sunny day… so sometimes we’ve gone out instead 😉

Okay… why on earth (I hear you say) am I bothering moonlighting on another garden when I have a list of on going projects in my own garden? Well… you know what it’s like when you’ve a huge ironing to do at home and you happily iron for a friend/relative at their house… no?

Getting a tad serious for a minute, as regular visitors to my blog will know, my garden has had the New Zealand flatworm as one of its residents. I have few earthworms. This flatworm was first discovered probably about 15 years ago now.

I’ll not distract this post by repeating what I have said in the past. You can read about my experience in this back post. If you find a flatworm in your garden you should destroy it. If you want to see a photo I posted one here.

Suffice to say, knowing I spotted a flatworm egg during the last month, it would be incredibly irresponsible of me to give away plants from my garden in a pot of soil. As a rule, if I give away plants, it is generally done with soil washed or shaken from the roots.

Last Friday, I lifted self-sown seedlings of Red campion and Borage from my garden. Without any soil, I laid them on some compost which I put on a strip of newspaper. The seedling was rolled up (with bottom folded over) and tied together with string.

The seedling parcel was then left to stand in a shallow amount of water, my theory being that the newspaper would act as a wick and draw up some water helping to dampen the compost which would keep the seedling from drying out.

Great in theory… yes! However, to transport my seedlings to their new garden location I transferred them into a smaller bucket and put a little too much water in it. I also stuffed too many in together. Result… some newspaper plant roll-ups lost their bottoms! No matter, they kept damp until I got to the garden 🙂

Expecting the soil in this garden to be compacted and firm (wrong again… note to self… check soil condition prior to planting next time) I took my half-moon lawn edger to prize open a trench for planting. Little prizing was necessary so the job was easy.

A trench strip may have seemed overkill for an informal planting but my thoughts were of survival. I wanted to soak the ground these young plants were going to. I wanted the water to go deep as plants search out water with their roots.

When plants have their roots deeper in the soil, they have a better chance of survival in times of drought. The reality for these plants is that they will get little help from me once I leave them.

So… as much as not wanting to spread flatworms to another garden my 2nd plan for these little newspaper plant parcels was one of an experiment. Will these young plants survive without any more watering once planted? I have plenty more in my garden if they don’t. I’d say definitely worth a try 🙂 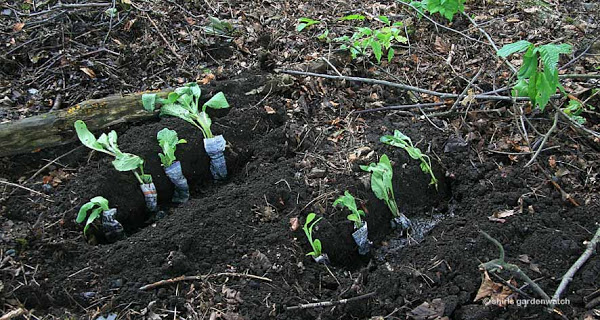 I planted the Borage in strips together as they can grow tall. My thoughts were that they would need to support each other if it got a little windy as I don’t plan to stake them. I also added a few other single plants around the trench to break up the formality.

Based on seeing how these plants grow in my garden, I decided to plant the Red Campion in clumps. Once again, I made a larger hole than they needed and soaked it well. I then clumped these groups together and then repeated this again for another area nearby.

Trenches well watered, they were back filled with the soil that had been removed. Plants then firmed in, they got one more top watering. Job finished then? 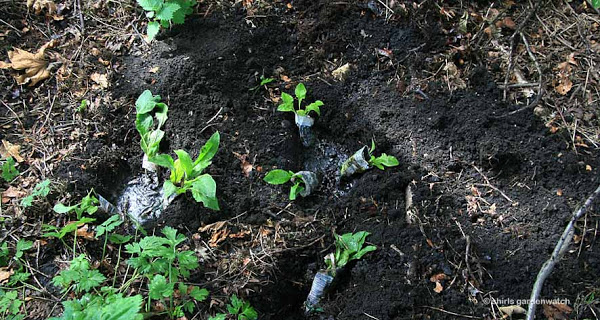 Well, not exactly… this is just the beginning! My ultimate goal for these fresh seedlings is for them to grow into strong clumps that will flower then self-seed increasing the number of flowers with each year for this and other parts of the garden.

Granted it will take a couple of years perhaps to really make a big splash of colour but during that time they will attract insects and bees on the way enriching this area for visitors too. It will be fun to watch the garden take shape too. 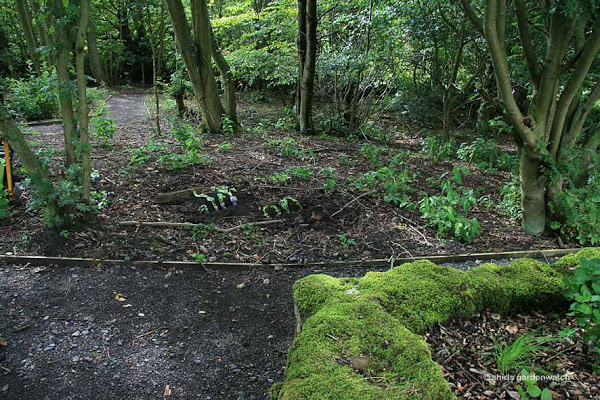 The mossy strip on the bottom right corner is the edges of a raised bed that has some herbs already planted in it. That’s why I planted the Borage along this path edge… to tie it in with other herbs.

Taking a walk around the path to the left and looking back to the raised bed (back in March when it looked quite different) you can see the area in the middle of the photo between the trees that will get a bit of height and interest for both wildlife and visitors. 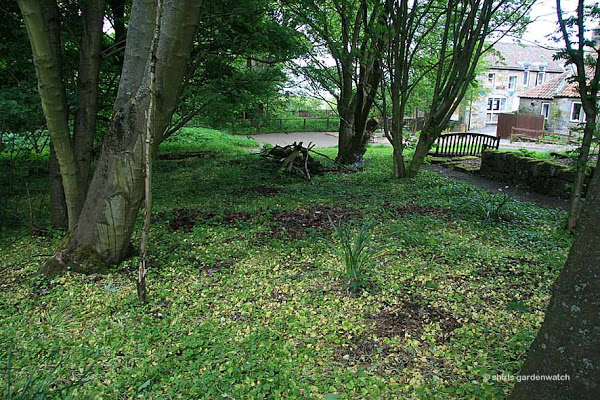 This new wildlife garden is at the entrance to RSPB Nature Reserve Vane Farm. It was an area previously behind a fence along the entrance path that visitors just walked by.

A fantastic job was done by a group of volunteers last year. The site was cleared, paths and a raised pond built with homes for wildlife added. Planting that has caught my eye has been a strip of young plants that will make a wonderful mixed hedgerow in a few years.

Regular visitors to my blog will know of my trips to SWT Reserve Loch of the Lowes over the last few years. You can see a compilation video here taken with my previous (non HD) camera. Perhaps it’s about time I produced a compilation video from RSPB Vane Farm as this is a Reserve I’d like to share more from in the future.

Back in May, I popped along to Vane Farm to discuss being a volunteer there. Within a few weeks I was helping out with an event! I’ve been meaning to blog on that for some time but time does just run away with us at this time of year doesn’t it? I’ll come back to it another time… it involved talking 😉

Since then, I’ve been caught up with lots of other things that have prevented me from being back at Vane Farm. However, the plan is (when I get more organised with free time) I’m going to get involved with planting up this new wildlife garden and perhaps blogging about it on the Vane Farm Blog too! Its early days and I’ve more people to chat to yet 😉

Sounds fun doesn’t it? Coming back to reality with a bump… as mentioned earlier there are dull but necessary jobs still to be sorted here. Weather permitting, 2 paving slabs await laying, a hedge weekend looms, our shed needs a little TLC to face winter and….

All that being said… we have to make the most of sunny days we get over the summer. We have always enjoyed our family time… lol… hence the long list!

Finally, hands up… two days after planting the newspaper parcels of young plants at Vane Farm’s new wildlife garden I returned to check on the new recruits… they were looking remarkably well. Yes, they were still recovering from their move but I am now quite positive that they will be okay.

Taking my watering cans on that trip to give the new recruits another good soak was a good idea. Yes, I know I said I’d leave them as an experiment. Good job I did give them a little extra help as we’ve had some warm spells since.

Oh yes… and I collected some fresh Red Campion seeds from my garden and scattered them in the area of the plants too. In addition I left Reserve staff two generous pkts of Red Campion seed to be used in other areas too.

It’s great fun sharing seeds and supporting other gardens and organisations. Now… its time to get back working in my own garden again! Hope you’ve been enjoying yours. What’s catching your eye at the moment?

4 thoughts on “A spot of moonlighting”