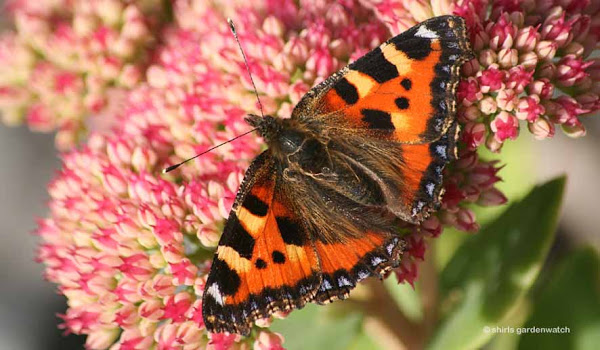 Infrequent postings without mention of a blogging break might suggest something is amiss. How much to say in a garden blog on plants/birds/wildlife is a tricky one. It would be very easy just to say there’s been no free time to blog this summer. That would be partly true.

As the UK sees some late September, balmy weather I’d like to wish everyone the time and opportunity to enjoy this second chance of summer! I’m guessing the barbecues and garden tables will be coming back out of storage. I was hearing in the news this morning that many pruned plants have re-flowered which must be great for bees and butterflies in particular. 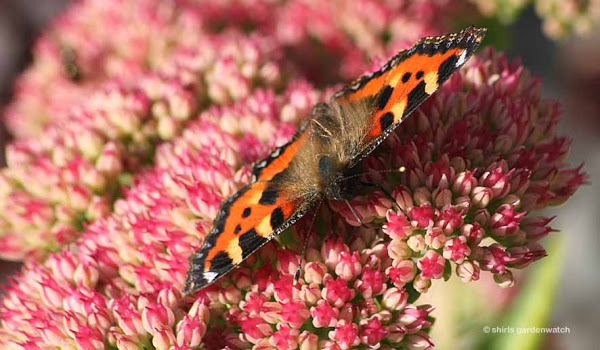 My front garden sedums are looking wonderfully rich in colour now (not images shown here). I haven’t seen butterflies on them recently but I’m guessing they are visiting now. Back in the first week of September the you can see the tiny sedum flowers were only just opening and I captured a few butterfly visits with my cameras. 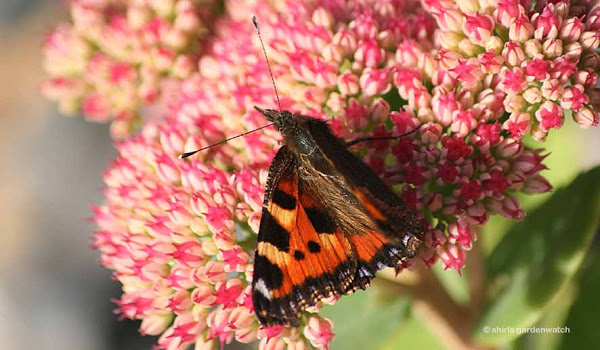 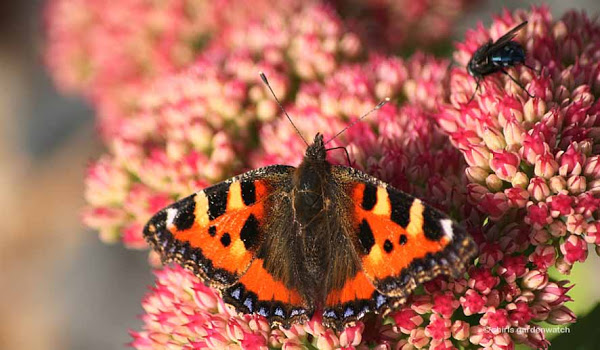 Peacock and Red Admiral butterflies can be seen feeding on buddleja (now past flowering) in my previous post. The Small Tortoiseshell butterfly can be seen in this post just a few days later and the day before we received the news we had feared all summer. 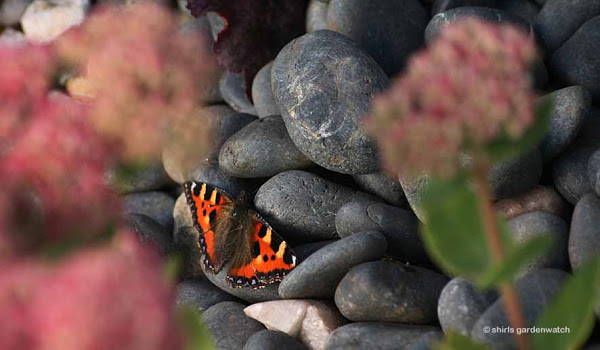 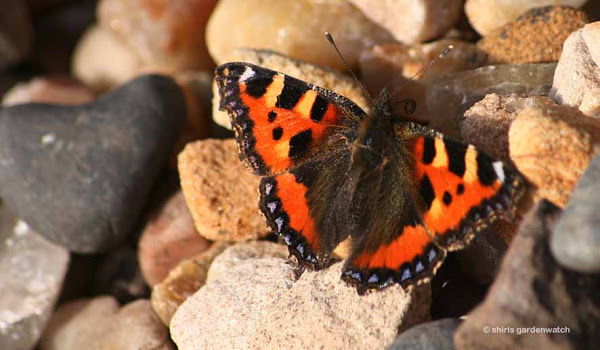 For visitors just popping by for a bit of light relief over a coffee, I hope you’ve enjoyed these photos and are enjoying your own garden visitors and plants just now. I’ll post again soon when I am able. Wishing you a great weekend 🙂

I’d like to dedicate this post to the Consultant & Radiographer at our local Hospital (Perth Royal Infirmary) who felt they didn’t have a good enough image of my husband’s kidney stones (annual check) and requested a more detailed image. They picked up a much bigger problem.

During the waiting times between hospital letters and further scans my garden with its plants, birds and hedgehog visitors should have been a place of comfort. However, as my blog and subsequent cameras and nestboxes only came about due to my husband’s encouragement and support I could face neither.

I actually avoided looking out the window (weeds have taken advantage of this) and my PC remained in a tidy, unlit corner of the room in the evenings. Cameras also remained in bags and being truthful bird feeders were being filled infrequently and hedgehogs lost out completely.

The dreaded news we received the day after the photos in this post were taken was that my husband had a tumour in his pancreas. This news came from a specialist in a different hospital. Three weeks ago today we had no idea how quickly things were about to happen.

We only had the weekend to break this news to our daughters (18 & almost 21), my husband’s elderly parents, my elderly parents, immediate family and close friends. Although very hard to do, we had one clear message for everyone – this was positive news too.

The stats we were given by the surgeon was that in 85% of the cases where a tumour is found in the pancreas nothing can be done. My husband was already in the 15%. Although not a small tumour, it was in a rare position in the centre of the pancreas and surgeon’s deemed it operable. Although a scary operation lay ahead this was a very lucky break.

This has been a major operation where the whole Spleen and Lymph nodes were also removed. My husband was in a High dependency Unit for five days but incredibly he was actually walking again within a couple of days of his Op. Now he is eating meals (with checks on blood sugars) and has only one tube left attached to him! He is looking well too 🙂

My carbon footprint isn’t looking too healthy at the moment, but I’d like to share a final surreal image/moment with you. The night before my husband went into hospital for his Op we knew would be hard – especially for our daughters. We couldn’t stay in.

Don’t’s ask me why but I decided to drive everyone into the Centre of Edinburgh on a bit of a road trip. It was a Saturday night with Uni freshers out in force, Stag & Hen night’s, Tourists and locals. The streets were buzzing and with windows down we went people watching!

Driving was a tad tricky at times with pedestrians and Taxi’s going unpredictably in every direction. After many street changes (not planned) I found a parking space. We got out, grabbed Starbucks’ Takeaway drinks and joined the medley of people buzzing about the streets that night. It was just what we needed 🙂

Now, here’s the surreal part, purely by chance, we passed by a particular building on our way out of the city. We were on a road that I’ve driven only maybe once before. For locals, I was driving behind Stewart’s Melville College and in front of the Scottish Gallery of Modern Art. It was dark but look what caught our eyes… 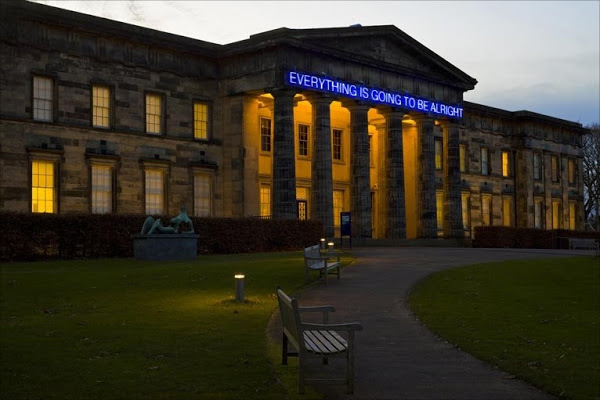 This is not my photo, see original image here.

The striking blue neon text above is by the Scottish Turner prize winning artist Martin Creed. This work has been on show much longer than the gallery had originally intended. I wonder how many other people have found this as spookily poignant as we did that night.

‘Everything is going to be alright’ with my husband’s health – well we’re a bit away from knowing that yet. We are keeping our positive outlook. I won’t ever forget the moment my daughter read the text above out and I looked across to see the words. We won’t forget that night we spent together either.

Tonight, is the first time I have sat at my PC writing a blog post around midnight (my usual time) in quite a long time. When I uploaded my photos earlier this morning, I wasn’t sure I would actually post this and how I would write it. I also had no idea that I would get a call from my husband to say he is being let home from the hospital for the weekend. He called it his weekend pass. He is now fast asleep upstairs as I publish this 🙂

Enjoy your weekend with those that are dearest to you. Thanks for listening and thanks for putting up with my infrequent posting 🙂

This post was written by Shirley in September 2011 for shirls gardenwatch.