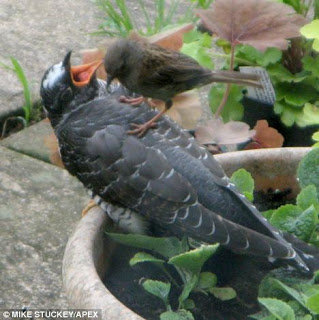 No… I don’t have a new garden visitor. I wouldn’t see the Cuckoo at this time of year anyway as UK Cuckoos are likely to back in Africa for the winter. For those that are interested, Satellite tracking by the British Trust for Ornithology (BTO) shows where five cuckoos travelled on their migration to Africa which I found fascinating to see. Maybe you would too.

But first, I came across info on the Cuckoo whilst searching for info on one of my favourite garden visitors – the Dunnock. I discovered (along with the Pied Wagtail, Meadow Pipit and Reed Warbler) it was one of the most common host species for the cuckoo. That was news to me.

Back in July 2010 an image of a Dunnock standing on the back of a fledged Cuckoo chick (five times the size of the little Dunnock) made the news.

The image shown opposite was taken by Mike Stuckey in his garden in Somerset, England. What a brilliant garden watching capture don’t you think?

For those that don’t know what’s going on here, this Dunnock believes it is feeding its newly fledged (oversized) chick!

It seems the parasitic breeding habits of the Cuckoo are notorious. The BBC video shown below (with narration by David Attenborough) shows us how this Dunnock parent would have found itself in this position via footage of another host, an equally small, Reed Warbler…

How fascinating is that? A blind, newly hatched chick (whose parent left it as an egg in the nest of another bird for it to raise) instinctively knows to remove other eggs and chicks from the nest so only it gets fed by the parents.

Add to that, after it has fledged the young Cuckoo gets fed for a further 2 weeks by the host parents and any others that can’t bear the begging noises it makes. I guess, as with all living species, it simply comes down to survival.

You’ve got to feel sorry for the host parents but the Cuckoo as a species really does need help. That’s why the BTO have tagged five Cuckoos. Information gathered from the tracking device will help understand more about this bird and then what can be done to help the worrying decline in its numbers.

Another news article (published in August this year) suggesting Cuckoos are heading to Scotland caught my eye:

“An analysis of three years of bird sightings within 10km sq plots across the UK – for the British Trust for Ornithology’s Bird Atlas 2007-11 – reveals cuckoos are thriving in Scotland, and in mass decline in England and Wales.

Dawn Balmer, Bird Atlas co-ordinator with the BTO thinks cuckoos are growing in number in Scotland even faster than thought.

“Figures do suggest Scotland could become a refuge for cuckoos,” she said.

Experts have theories about the change. These include varied food availability, loss of habitat in England and climate change causing shifts in breeding times.

“One thought is that adult cuckoos like fairly big caterpillars and maybe the food supply is better in Scotland,” said Balmer. “This could have happened because of climate change.”

It could also be linked to the cuckoo’s ability to find a nest in which to lay eggs.

Cuckoos are parasites, laying their eggs in other birds’ nests, but if the host bird, such as the meadow pipit, has started breeding earlier, their nests may not be available at the right time.

“They could be getting out of sync with each other,” said Balmer.” “

Next year, the BTO intend to extend their Cuckoo tracking project to Scotland. That makes sense. However, Satellite tracking isn’t cheap so more fundraising will be required. The BTO are getting support from Heatherlea on this.

Coming back to the current tracking of five cuckoos by the BTO, they (Clement , Martin, Lyster, Kasper and Chris) have their own blogs. If you’re keen you can meet and follow them here. You also get an option to sponsor their tracking too.

There was an offer to sponsor a Cuckoo for Christmas but the order deadline was the 14th of December. You can still make an order but there is no guarantee your pack will arrive before Christmas now.

Sorry about my late post with details… as I said above I only came across the Cuckoo via a search on the Dunnock. I’m very glad I did though and I hope this post gives just a little more awareness of the plight of the Cuckoo.

Ah yes… Christmas prep awaits us all just now. I hope this little story and video helps break the treadmill you may be on now. Enjoy your weekend 🙂

This post was written by Shirley for shirls gardenwatch in December 2011.

4 thoughts on “Coming across the Cuckoo…”