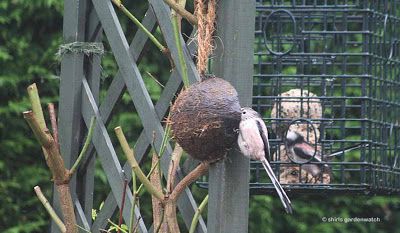 … it’s HOGMANAY! The traditions here in Scotland are still very strong. Hogmany is the Scots word for the last day of the year. Although the world sees Scotland bring in the New Year with Edinburgh’s Street Party and fireworks it is the households of Scotland that keep the traditions of Hogmany alive.

I’ll not have much time for gardenwatching today but the birds have clean feeders and food so they’re already catered for. Ah yes… that cleaning and food catering is a huge part of Hogmany here in Scotland.

Let’s start with that cleaning and the reason I am up early today! Hard as I try every Hogmany not to succumb to the urge to clean everything I can reach, I never really succeed. It really is in our genes.

Yes, l will end this year with an evening washing of the kitchen floor and making sure every bin is emptied before the bells ring in the New Year. Sad but true, this cleaning of the house on December the 31st is a tradition here in Scotland. All my friends and family will be doing the same although not necessarily in the same order. Some will do more, some will do less.

Whenever its light this morning (by the time I have finished this post probably) I’ll be outside cleaning my windows… after recent winds they need it. Nope… I can’t miss out the window clean 😉

Then there’s the food! Just why do Scots fill up their food trolleys even higher than they did for Christmas just the week before? Well, for one the shops are closed for longer than at Christmas but that isn’t the main reason.

All the Scottish homes that stay up to ‘bring in the bells’ will have a bounty of food and beverages to welcome any visitors they get. Again that can vary from a selection of cold snacks to hot buffets.

Oh… that reminds me I need to buy some packets of shortbread! You see, the street parties really began in the small streets in our villages and small towns where we wandered between each other’s houses taking with us bags containing a first-footing gift for each house and some beverages (alcoholic and non-alcoholic).

We would always knock on the door to be greeted by the householder so we could pass over a gift. When my parents had a coal fire we would have a piece of coal wrapped in paper to give as our gift. Now, I usually have packets of shortbread wrapped.

Traditionally, this first-footing (first foot over the doorstep) gift was to bring good luck to the household and if there was a male (preferably with dark hair) he handed over the gift. We would shake hands and exchange kisses as we wished everyone in the household a HAPPY NEW YEAR!

If someone was bringing in their first New Year in their house then they stayed there and neighbours, friends and family would visit them. That’s when the tall, dark first foot through the door for the New Year is followed more to give that new home good luck. This is believed to be a throwback to the Viking days when blond strangers arriving on your doorstep meant trouble.

I can remember fondly our first-foots of our first New Year (newly married) in our first new home. My parents had driven through, waited around the corner listening to the bells come in on the car radio before ringing our doorbell just after midnight. They brought coal too! That was a quite a surprise 🙂

Traditionally when first-footing, from our bag, we would pour a small drink for everyone in the household. The household will also pour a small drink from their selection for us. We would raise our glasses wishing each other Good Health & Happiness for the New Year. We would then be offered food. Lol… yes spirits could be high by the end of the night in some occasions but as the night could be a long one drinks exchanged aren’t always alcoholic.

It is the hospitality tradition that is still followed here. This tradition can be followed over a few days (weather permitting) as visits to families and friends living further away are made. First-footing gifts are still given even then as you are still wishing the household good luck for the following year. Once again food is offered and many toasts to the New Year will be non-alcoholic ones as people are driving around houses.

This New Year, we’re not expecting visitors as the bells come in. Our street is a quiet one at New Year. That’s ok. We will stay up and bring in the bells whilst watching Hootenanny with Jools Holland and his live guests on the television. Our daughters are going to friends parties locally and will probably be back before it ends which will be nice they might even bring back friends with them. Lol… and I’ll have hot food for them sitting in a slow cooker 🙂

Stovies was what my Mum had waiting for us when we came in. She made hers in the tradition way of leftovers from the Sunday Roast. She’d keep the end bits of her roast beef (chopping them roughly up) and the dripping from the roast.

For my Mum’s stovies, she’d add potatoes, roughly chopped onion and beef sausages (pre browned and cut in pieces) to the dripping with seasoning and a little water. The potatoes would cook until almost mushy and once the sausages were cooked the bits of roast beef would be added to heat through. She would also let the stovies almost burn in her pan so there were brown crispy bits of potato through the softer potatoes which she would stir through. These were the really tasty bits we all loved.

Tonight’s planned slow cooker meal I’ll have for any visitors is almost a version of my Mum’s stovies. I’m making a potato and sausage casserole. My recipe has sausages, bacon, onion, garlic, potatoes, fresh sage and vegetable stock in it. The warm smell of it cooking will fill the house later. We will be smelling one of my families tradition of Hogmanay 🙂

However you spend this last day of the year, do enjoy it and share it here too if you’ve time 😉

Wishing everyone that has visited my blog all my very best wishes for Health and Happiness in 2012. Have a great one 🙂

Oh… that gardenwatching thing… just looked out my window and a good sized group of long-tailed tits have just breezed through my garden feeding on a variety of feeders. Now that’s a lovely start to Hogmanay 🙂

This post was written by Shirley for shirls gardenwatch on the last day of December 2011.