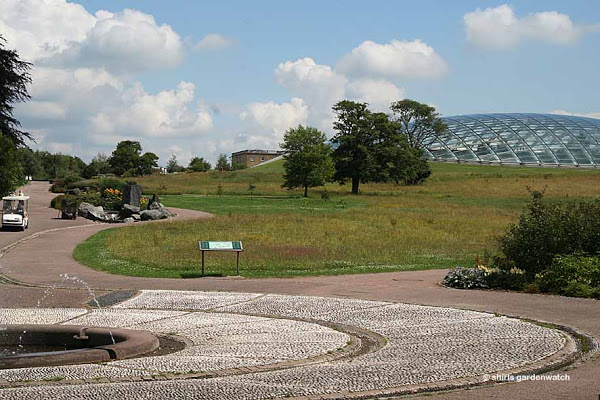 Looking for a holiday destination with a nice property and places of interest nearby this gardener had the boxes well ticked back in 2010! We have visited Wales a few times but this time my garden visiting eyes were on the relatively new National Botanic Garden of Wales.

Nice property found, we could be just five minutes away from the garden by car. That was a record! Now, to tempt teenage daughters with my chosen destination a little research was required.

An online booking for two to a Gavin & Stacey Tour (tv show) in Barry had us sorted. Little did we know that this was the very first tour we had booked and the press would be there to cover it and the character Nessa would be seen walking down the street and joined them for photos and chat! It was a scorcher of a day to be interviewed for radio etc on a vintage bus going round the properties – a trip they won’t forget that’s for sure.

An equally scorching day for our garden visit (like Scotland, Wales isn’t always wet) saw my husband heading back to the car for a hat! Seeing as my garden visit video below is 4½ minutes long we’ll skip straight to the tour and I’ll chat about it after if you’ve time to hear more.

My favourite areas of the garden are highlighted with text… are you ready? I took many photos. Hold on to your sun hat…

It was the Great Glasshouse that caught my eye when I heard about this garden. I loved the way it nestled in to its hillside surroundings. On our visit, I found it almost spacecraft like from the outside becoming quite Tardis like on the inside.

The Great Glasshouse at the National Botanic Garden of Wales (at the moment) is the World’s largest single span Glasshouse. It measures a staggering 110m (374`) long by 60m (204`). Divided into 5 regions it includes the Mediterranean Basin (& Canary Islands), Costal California, Chile, Cape province of South Africa and South Western Australia. 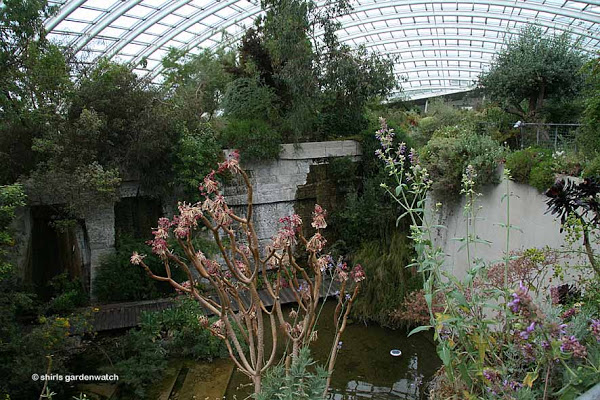 When walking along the bottom paths the true scale of the depth/height of the Glasshouse isn’t quite appreciated until you look down to the path you have just walked. Wow… it looks like an exploration of a forgotten land doesn’t it?

A variety of flowers caught my eye in the Glasshouse including the giant flower spikes of the Tree echium and the impressive plate sized blooms of the architectural Protea flowers.

However, I was equally taken with the planting drift of small delicate blooms of the everlasting flowers (Helichrysum) growing with mixed planting along a path edge. I took many more photos of them. 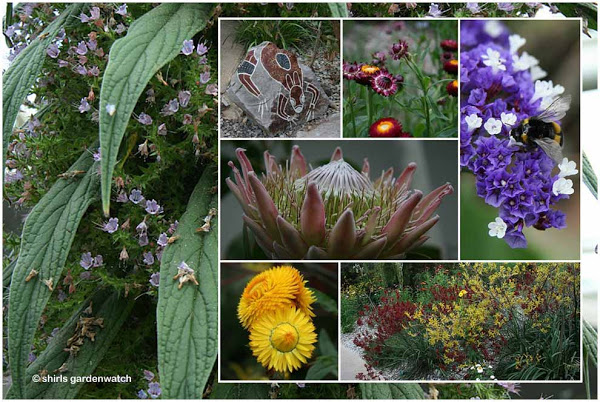 Bees were a buzzing in the Glasshouse and wonderfully young chicks could in heard, excitedly chattering, in the tall ivy clad wall in the bottom section of the Glasshouse. My guess was that there were House sparrows nesting there as adults were spotted in the area looking very focused.

Attractions for children on garden visits were always a consideration for me when my daughters were young. The National Botanic Garden of Wales would certainly have passed the test for me. It has a variety of garden layouts (ideal for exploring) with inventive paths like the winding pebble rill on the main broadwalk which was inspired by the meandering River Tywi, which flows through the nearby valley.

On our older family visit, my teenage daughters were still attracted to the low spurting water fountains at the circle of Decision on the main Broadwalk – where I found myself temporaily distracted from the group by the bog garden on a path to the right! A quick few photos and I was back.

I’ll not go through our whole visit in detail as it is the feel of this garden I want to share today. It is a relaxed open space with lots of interest. Its setting is like non other I have visited having a nature reserve to the north and east side of the formal garden area! I didn’t get round the reserve on our visit but found a tranquil moment opposite one of the lakes (below the Great Glasshouse) where I spotted dragonflies. 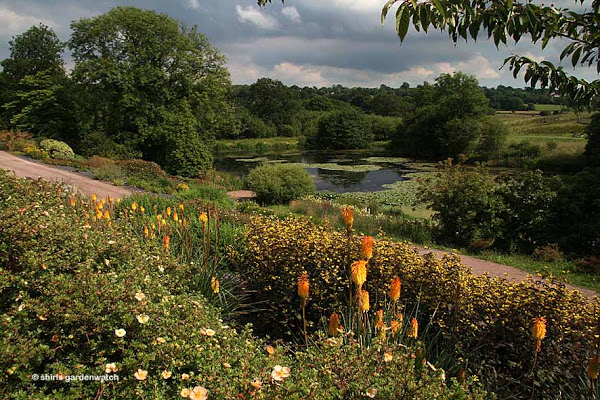 I could add so much more here about the stories behind this and that part of this garden (set on historic parkland, dating back around 400 years) but probably best if you explore their website where you’ll also find out about future events like the Thursday’s St David’s Day (patron saint of Wales for those outside the UK) celebrations and the exhibition running in March celebrating Inspirational Botanists – Women in Wales.

It is no surprise to me that this new garden (opened in May 2000 & the first national botanic garden to be created in the new millennium) has recently taken 5th place by Visit Britain in their Top 10 Great Britain Gardens. Nice to see three Scottish Gardens in the Top 10 too 🙂

As a gardener, my favourite areas of this garden were the Bog Garden, the Great Glasshouse and the Double Walled garden. “The Double Walled Garden is thought to be of Scottish design. It is a very unusual feature of Welsh and English gardens but is more commonly found in Scotland.” I didn’t quite appreciate that before.

However, for me, the area that surpassed all of that and the image that I will always remember from my visit to the National Botanic Garden of Wales will be of the hillside wildflower and perennial plantings and meandering grass paths on the slopes sweeping up to the Great Glasshouse which were looking great during July. 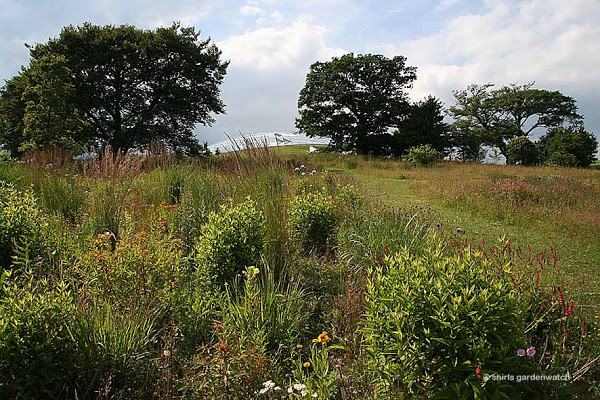 Standing with a lake below on the other side of me in the photo above, I almost forgot I was in a Botanical Garden – the Great Glasshouse dome almost looked part of the sky from this view – quite stunning to my eyes 🙂

As a tourist in the UK with only a few stops to make, I would definitely recommend a visit along to this garden. Location wise, it is West of the Welsh capital city Cardiff at just 55 mins away by car – postcode for Satnav is SA32 8HG.

This post was written by Shirley for shirls gardenwatch in February 2012. The images above were taken on July 12th 2010.