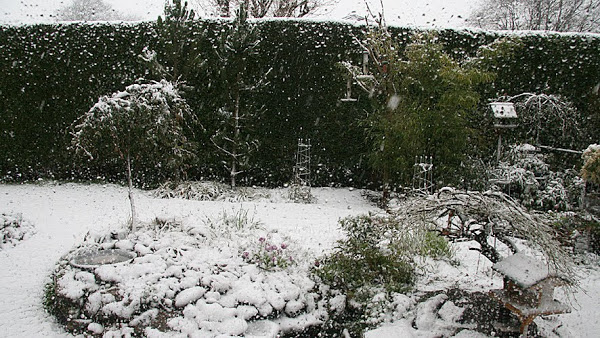 The chilly cold and snow of winter came overnight. What weird weather we are having here – it was almost summer-like on Sunday! On Tuesday morning, winds swirled the snow in every direction and we couldn’t see clearly through the windows.

The pink flowers of the drumstick primulas could only just been seen in the white carpet we now had. As the wind direction changed I went out and swiped clean the snow droplets covering the glass. Now, I could use my camera from indoors. 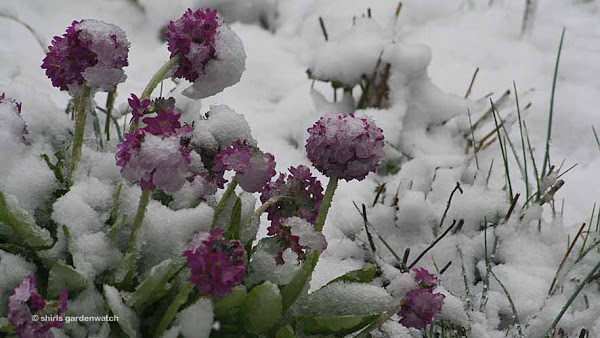 The snow continued all morning but by lunchtime there was a break in the weather just long enough for a quick dash around the garden to see the damage. As expected, many flowering plants were on the ground, flattened by the wind and snow. 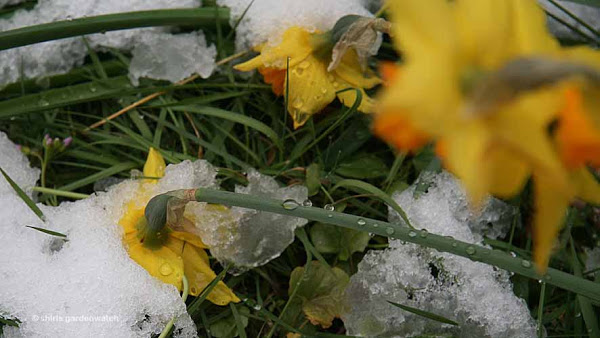 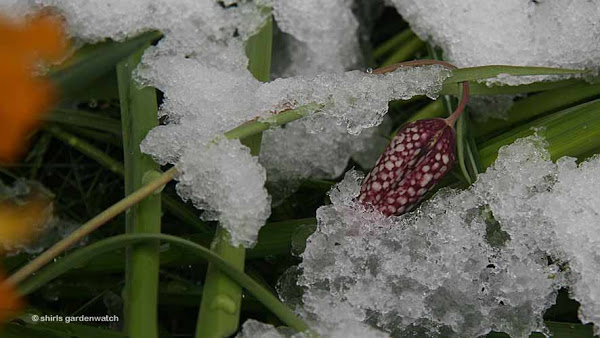 However, after the unseasonably warm weather of March many flowers were ahead of themselves. Having had a busy weekend, I didn’t realise my (eagerly awaited) cuckoo flowers were in flower.

Perhaps this was just as well as I would have been cringing at the snowflakes! In all three areas where the cuckoo flowers were growing they were flattened but behind my gate where the fence sheltered the ground a little the stems were longer and they looked worse. 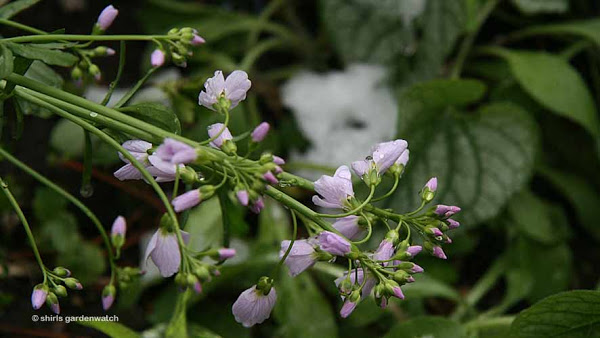 The upside to this instant winter weather was the instant garden full of birds! Joining the Blackbirds, Dunnocks, Robin, Woodpigeons and Starlings was a large mixed groups of finches (Goldfinches, Chaffinches, Siskins). A male Brambling was spotted in the group (not in the photos or video below) which was a bit of a surprise at this time of year. 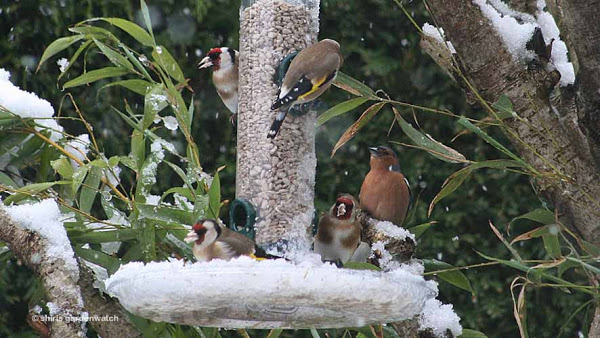 Another surprise sighting at my feeders was a good sized group of Greenfinches. I spotted six at this feeder but there may have been more at other feeding areas. This is very good news for this species that has seen a decline in numbers over the last few years.

I had to grab a video of the Greenfinches… note there seems to be a pair sharing or helping each other with food. You should also note that there is background music with this video as it is taken from inside and through a window. It isn’t a long video and you can select higher quality if you wish. The video is followed by a photo of a pair of Siskins catching the sunshine. 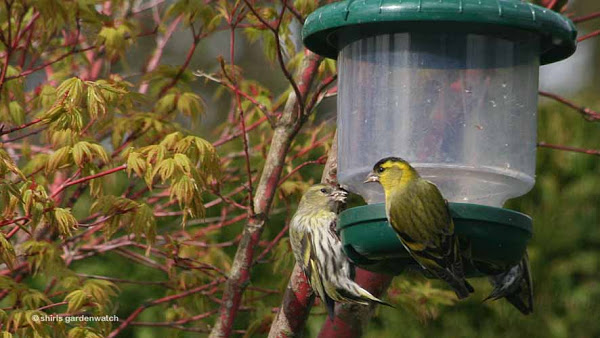 During the afternoon, we had brief breaks in the snow where the sun got out on occasions and then several hailstone showers followed. Many areas almost completely cleared of snow only for it to return again a short while later.

The montage below shows more flowers that faced the cold temps, winds and snows of Tuesday. I didn’t realise my dwarf rhododendron was in flower, a bergenia was in flower and that I had my first allium flower bud of the year almost ready to open in my (usually sunny) front garden. 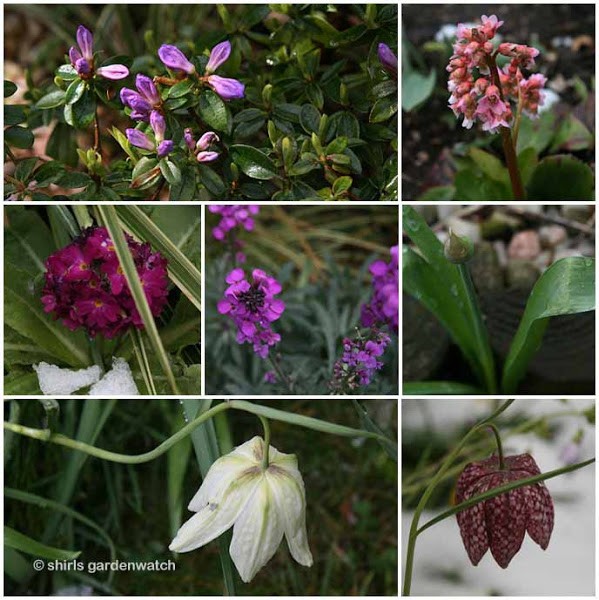 At around midnight the ground had a light dusting of snow again and it felt icy cold! As I was sorting my photos and writing this post I was watching my Live cam in my hedgehog feeding station (Hedgehog Manor).

To be completely honest, I didn’t expect to see any hedgehogs out at all seeing as it was so cold. To my complete surprise again, I did and saw the same hedgehog visit twice! This hog is a funny one to watch as it comes in and leaves at speed eating and drinking for just a short time on each visit. I think this one could be a female.

For the moment, I’m grabbing photos of every hedgehog visitor I see Live via my cams – although many more could be visiting that I miss completely. I’ll post an update on hedgehog stories soon. Below you can see our guests on Tuesday evening – yes, our nestbox has a roosting Blue tit!

My final thoughts for my ‘back to winter’ garden have to be for the bees that have been about recently (seen red and buff tailed ones) and the butterflies that I was enjoying seeing in our previously warm, sunny days (small tortoiseshell & peacock).

If you are experiencing a ‘back to winter’ garden or haven’t left winter yet do stay warm and safe on the roads. Brrrrrr… the wind can be heard through the microphone on the live cams… it doesn’t sound nice out there! Oh dear… just looked out the window before going to bed and there are heavy snowflakes swirling around. Mm.. maybe they’ll be gone by morning and this has all just been a weird dream 😉