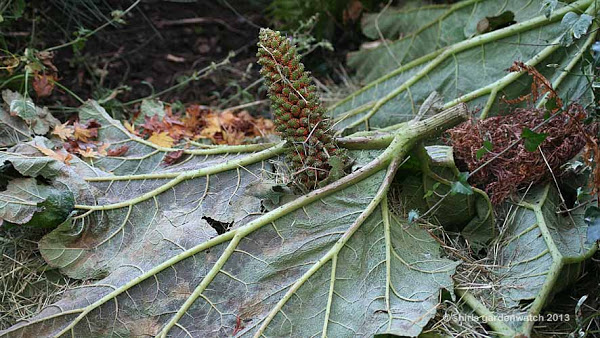 Ooops… I feel a Christopher Lloyd quote coming on! For a few years now I have shown images of what I have done to protect the Gunnera in my garden. Let’s take a look back on 25th October 2010…

Let’s take a look further back to January 29th that year. My Gunnera manicata had seen through a fair few chilly nights and sprinklings of snow on the ground… 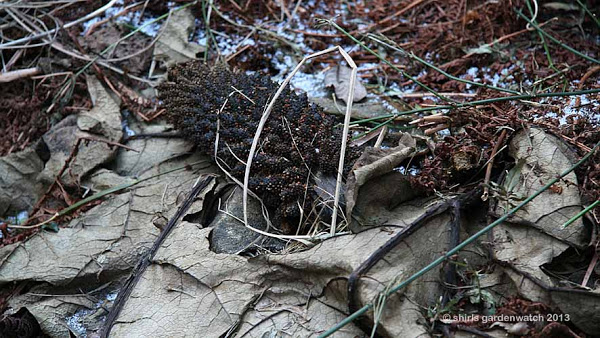 The Gunnera flower spike turns a black colour with winter wet and cold as you can see above. Eventually the leaves go the same way. However below the withered leaves the crown (the area from where the flower spike grows) was protected with a thick layer or two of hay. This layering method, between the upturned leaves of the gunnera, has successfully protected this plant for many years now.

The big Gunnera question for 2013 has to be … is it too late to protect a Gunnera plant from winter when its leaves and flower spike are completely black and wet? Well, that I can’t say for now, but I should be able to answer by March sometime – one way or the other. Ooops…

When it comes to garden plants, I generally give them the benefit of the doubt. Sometimes, for one reason or another we don’t get round to doing the garden jobs we mean to at the right time. Does this mean it’s too late to do them? Well, it depends what they are I guess.

In the case of the ‘Gunnera plant v winter’ I wasn’t going to give up on it entirely. Perhaps my mistake may be a useful exercise for others protecting Gunnera too. I’ll return to this post with an outcome image come spring. 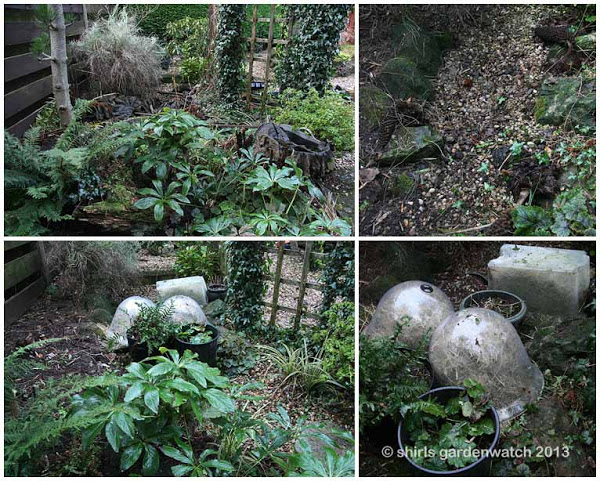 My January 10th ‘late in the day’ Gunnera protection story for 2013 went… all black, wet flower spikes and leaves trimmed down. Truth be told most just broke away anyway.

Two large clear plastic bell jars were filled with hay then turned over the wet flower crowns as this is the part that needs protection from winter.

Not having a third bell jar, I used a plastic jelly box that was originally used as a hedgehog feeding station (with 13×13 cm entrance cut out at one end) which was also filled with dry hay.

As these were all light containers, I placed a few heavy plant pots around them to help stop them being caught in gusts of wind. Wire pins might be a good idea here. Job done!

I should stress, should anyone be following this method before I know the outcome, I don’t know if my plastic bell jars themselves will stay intact through winter frosts and cold – follow this method with caution.

It was a lunchtime weather report suggesting a weather freeze was on the way that prompted my late afternoon ‘gardening sprint into action’. Two days later and no cold temps or snow yet but my Gunnera will be appreciating ‘being prepared’ with its duvet of hay. It was almost dark when I finished but just look what I spotted… 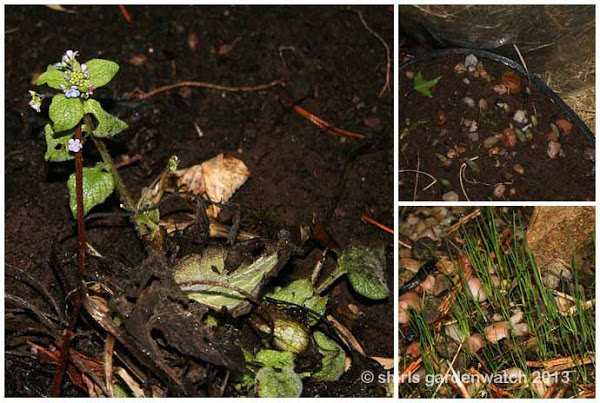 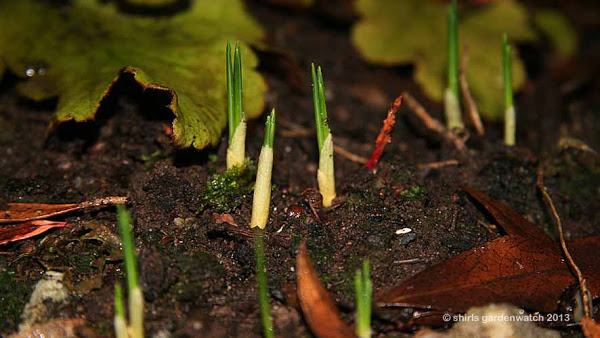 Crocus bulbs in large basket container and in borders near back door
growing much further on than planings in lawn (bit early for here).

Much earlier on in the day, during breakfast at the window, just look what other sweet garden moments were to be seen… 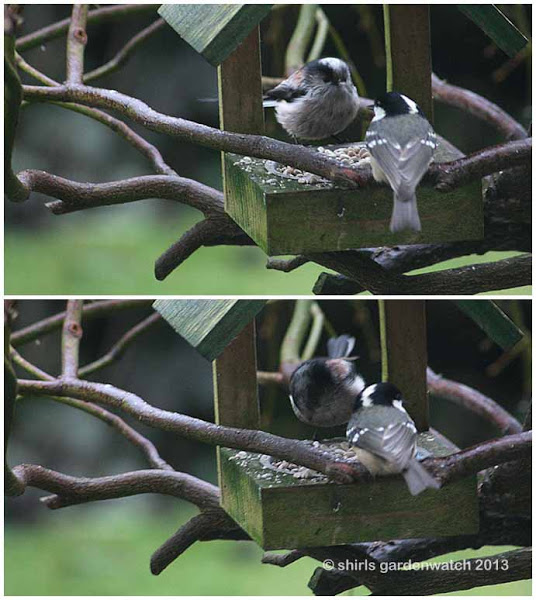 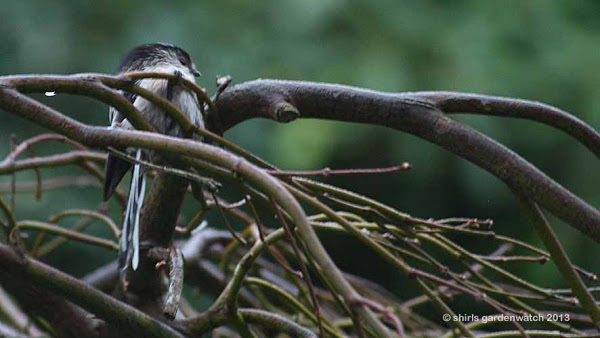 I’ve been noticing a couple of Long-tailed tits joining the large group of siskins that have been visiting my garden recently. LOL… the Long-tailed tit wasn’t stuck in the branches of my small domed Acer tree that holds the small window feeder.

My photos of the long-tailed tit and coal tit feeding together are a bit grainy due to light levels being low but what a new a fun sight to be seeing. I know I’m not the only one with the challenge of capturing early morning photos and video at this time of year.

John at MIDMARSH JOTTINGS captured a low light image of a Fieldfare on a morning bird table the same day. I hope he gets another chance to capture some images on a brighter part of the day – that was a special winter visitor. Some video would be good too, John 🙂

If you are out and about experiencing winter conditions – stay safe and warm. If you’d like to see birds feeding in your garden, it’s not too late to put up a bird feeder and during cold weather the birds should quickly find it and you will be helping them survive a cold night. Wishing you a great weekend 😀

Oh yes… that Christopher Lloyd quote that came to mind when I wasn’t following my own Gunnera protection plan of the last few years. I was thinking of it in terms of the winter rush of tidy–up and protection jobs to be done. However, I also move plants around when I want to 😉

There is always such a rush of work in spring that we should get everything done that we can in the more leisurely periods of congenial weather during the autumn and even into winter. But where there is any doubt about moving a shrub or splitting up a herbaceous plant in autumn, the task should be deferred until spring. That is my official pronouncement. Don’t expect me to follow it myself, because I’m also a great believer in doing a job when I want to do it, and to hell with the consequences.

Christopher Lloyd, The Well-Tempered Garden’, on ‘When to Plant’.

0 thoughts on “Is it too late to protect my Gunnera?”