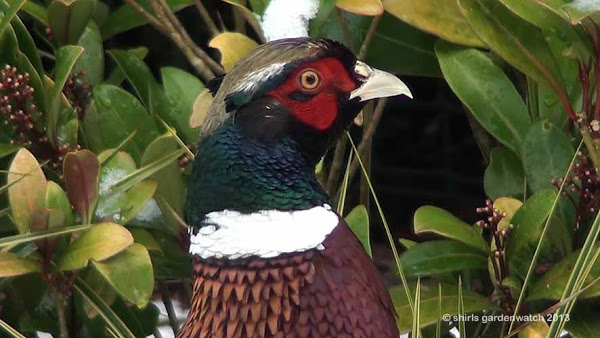 Taking the full garden tour last weekend was a male Pheasant, will he return to be counted this weekend? LOL… not likely, the birds usually take a garden break during my window break to record what bird species and how many can be seen at any one time during an hour, in my garden.

Living in a tightly packed housing estate near the edge of a small town this isn’t a regular garden visitor so he was watched with great interest. That’s the one positive side of snow – it brings with it unexpected winter visitors and larger numbers of the garden regulars!

The image above is a screen grab from the video below.

High above the ground feeder that caught Mr Pheasant’s eye there was a buzz of activity with Long-tailed tits bouncing off three hanging peanut feeders. Grouping the feeders like this has definitely made them more popular than a single one in three locations.

High above the deliberate grouping of peanut feeders that caught the Long-tailed tits attention, way up in a neighbours overlooking tree, another winter visitor was spotted some time later. This winter visitor I was looking for and had fruit out to attract. It did come down to it too but as I moved to get my camera it flew off. However I was still delighted to capture, albeit dull, my first video of this visitor up in the tree. It looked like it was calling to others.

Today (Friday) we’ve had a good covering of snow, the type that weighs down tree branches and requires a serious clearing to get a car back in the drive. Last Friday when snow was predicted overnight, I covered one of my small ground feeders with my original jelly box hedgehog feeding station (previously protecting a gunnera) to keep the seed visible and dry for the birds come morning. This idea worked well. However we only had a light dusting of snow then. 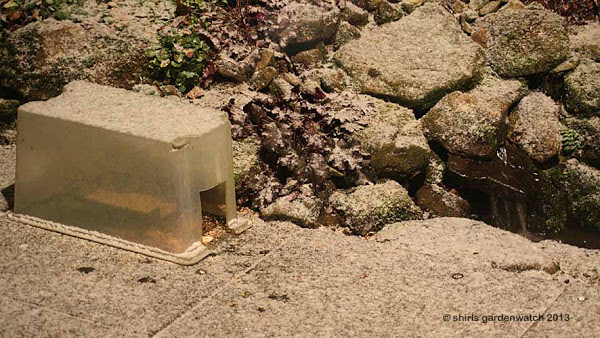 During the early morning filling of feeders I decided to scatter some seed under my very short legged large ground feeder that was sited on forest bark chippings beneath a seed feeder (to catch spill). I had noticed that a dip had developed underneath the tray and had seen small birds go under looking for food.

Today, with our heavier snowfall a Woodpigeon was trying to get under this table as you will see in the montage below. However, it was the Pheasant that had this idea first and he who gave me inspiration for the simple snowy shelter bird feeder shown below. 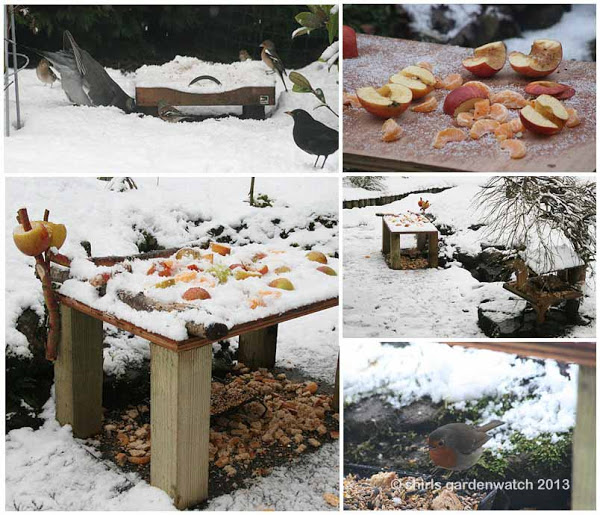 The original plan was to use two unused fence post ends sitting in my shed. Last weekend, my OH was tasked with cutting them in two to give me four table legs. I then requested a piece of exterior plywood (again spare) to be cut in a rectangle for the table top. Having such strong materials meant the table had weight and could take any bursts of wind from around the side of the house.

Once the table was sighted near the flowing water from my small pond, I could see I could use the top as a feeding area too. A fruit platter was laid out in the hope that a Fieldfare might pop by. Watching from my viewing window I could see my simple table needed some practical features. Blackbirds were slipping on the surface of the plywood when they tried to land.

I always recycle tree branch prunings in my garden and it was clear to me a couple of pieces nailed to the top would work as good landing spots. I set to work nailing them on with one tight to the surface and another a raised bar.

As you will see above, I also nailed a branch to a table leg to make a an upright spike for a couple of apples. This also acted as a perch for birds to land and a signpost to advertise the fruit for periods when snow was partially covering it on the table top.

A further addition of an extra small piece of branch tucked in to the larger gave a pocket that I could add peanut butter (natural) for the Blackbirds who have taken a liking to it. Would they find it under the snow though? Oh yes, very quickly too! Of course, not far behind them were the Starlings as you will see from the video below.

Oh yes… this snowy shelter bird table did it’s job even better than I expected. It was now a double decker of a feeding table and below the food stayed dry just as I hoped. With the table being heavy and solid the birds don’t move it as the use it and they’ve very quickly mastered the gaps when running/flying off/in. Take a look…

Further to the action above, a Mistle Thrush was spotted feeding on the fruit early this morning. I did capture video of this first garden feeding sighting but alas had a technical mishap when transferring from camera to PC and lost it. Aw well… should we still have snow over the weekend we could see it again but the forecast is for rain now.

We’ve been very lucky here, we’ve had snow but it hasn’t caused too much travel disruption until tonight. Tonight the garden is very heavy laden with snow but tomorrow morning the Blackbirds and other ground feeding birds will have easy acess to food via this new snowy shelter – it really is working a treat as is the bamboo landing bar too. 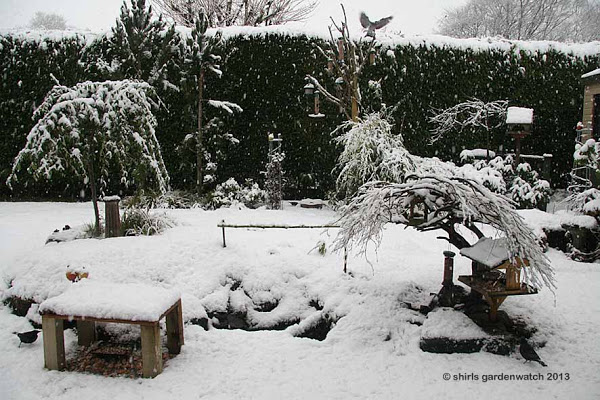 The image above was taken mid afternoon and much more snow came after this.

So this weekend the RSPB Big Garden Birdwatch has finally arrived and if we have still have snow my count could be quite interesting. However, I might need a friend to help count the many Chaffinches who feed in all areas! If you are taking part with a count, have fun 😀

Wishing you a good weekend, stay safe and warm. Gosh, I kid you not… it’s almost midnight and I’ve just spotted something out of my window. There is movement out of the pockets in the snow around my little pond. Can you guess what it is?