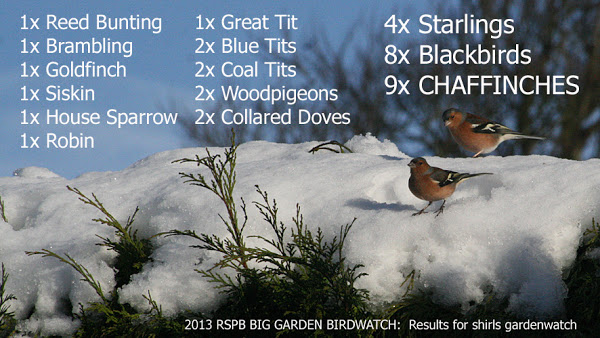 Before we get to the (exciting late entry) results from the shirls gardenwatch, Perthshire Garden let’s take a look at who opted out during my one hour count.

The now regular female Great Spotted Woodpecker chose to pop by early morning missing out on her chance to be included. The pre count regular small group of Long-tailed Tits weren’t seen all weekend and haven’t been seen since which is a pity as they were very entertaining to watch.

Watching out for the all year round, regular Dunnocks was tricky with the depth of snow we had making it difficult to see them in the edges they favour like under my hedge. I suspect they were there. It’s not surprising at all that they were once known as Hedge Sparrows. So the Dunnock didn’t appear in my count nor did the wished for lone Fieldfare who has been seen outside my garden – but it was spotted just after!

It’s perhaps not difficult to guess why our regular garden birds opt out during our counts over the Birdwatch weekend. Successful promotion of this event had a staggering 600,000 submitted counts last year and with mentions in all media from local newspapers to Twitter word gets round to people who perhaps don’t normally feed the birds but like the idea of taking part.

So our garden regulars are perhaps spoilt for food choices during the weekend of the Birdwatch? Like others, I suspect so. Our garden birds will have no loyalty whatsoever to all of us who go out every morning (in all weather) to top up and clean feeders. Many would agree that it’s disappointing when the count doesn’t match a normal day in the garden.

Some might also say that doing a count when there is snow on the ground could give an inaccurate count. However, this also gives a picture of the birds that are struggling to find food during harsh winter conditions when unexpected species arrive in gardens. All the stats we supply the RSPB help towards understanding our UK bird population and has value for conservation.

Choosing to do my bird count with the good covering of snow we had on Saturday (knowing it might rain on Sunday) I was hoping that we’d see the now regular winter visiting Bramblings who have been at the feeders for a while now. Four were spotted on my neighbours overlooking tree but I could only confirm that one was spotted at my feeders during my count. I was delighted – but there was another surprise to come during the last five minutes of my count.

Thanks to watching extra closely for my Birdwatch count I spotted a bird that I would have probably missed visit completely. Spookliy, my photos below show this surprise visitor was quite familiar with one of my feeders too! I wonder how often she has been visiting. Fortunately my camera was to hand as initially I wasn’t sure what I was seeing.

Once zoomed in on my photos I started to suspect a female Reed Bunting and image searches confirmed my ID. Wow… this took my species count to 14 which is the best so far… and I had a new visitor too! A male Reed Bunting made a brief appearance in the same tree back during the heavy snows of January 2011 (but went nowhere near the feeders) and his visit helped me in my ID guess.

My stats in the image below show a good representation of the bird species visiting my garden just now although not accurate in numbers where the finches are concerned. We get large groups of finches visiting just now and after the count was over… down they all came! Ah well… I was still very happy with my count and as expected Chaffinches still reign top bird in my garden 🙂

Although grainy zoomed in images in the montage below, they might help anyone else ID a female Reed Bunting. I know the duller, not perfect images have helped me in the past – note the reddish markings. Note the dark outline shape in the tree where I first spotted her en route to the sunflower heart feeder too. 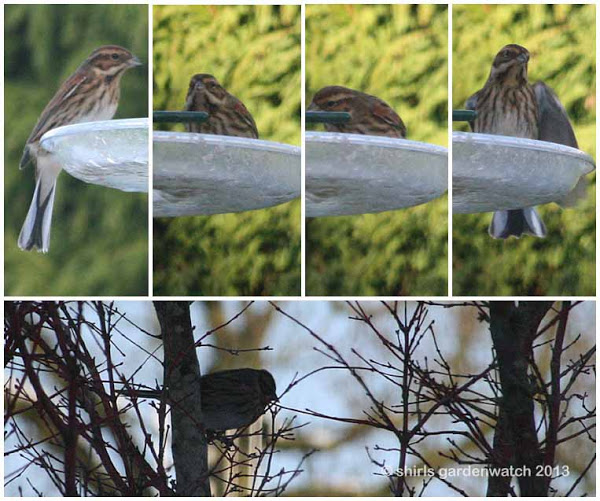 What a great few garden captures of a female Reed Bunting happily feeding with a Brambling, Goldfinch and Chaffinch I got. I still can’t believe I was seeing this at all in my garden far less during my one hour count!

She was completely at home with the feeder ports too – amazing considering this is a bird with a habitat of reed beds, wet pastures and marshes. It seems that in winter, the Reed Bunting will sometimes look for food when deprived of their natural resources due to snow and ice. Although, it is expected to look on the ground for the sunflower hearts and seeds – not at a feeder! 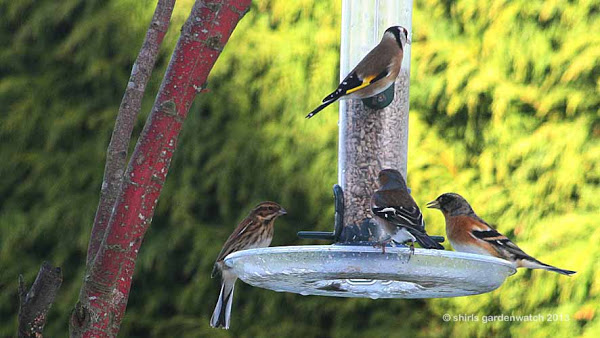 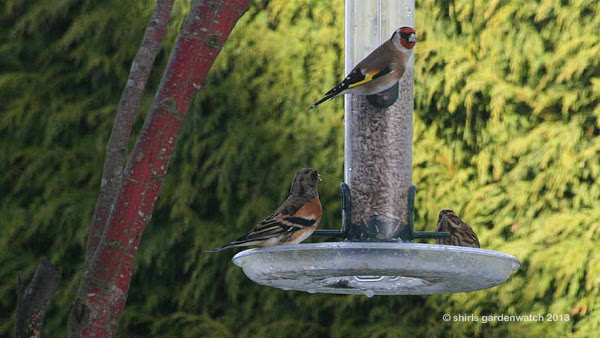 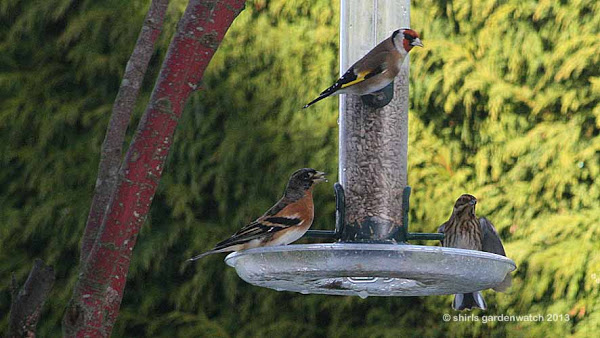 During my count, taken 10:45-11:45 am last Saturday, the weather revealed our first blue sky in ages and with the sun out too I already expected many birds could chose to sunbathe and not appear at the feeders.

Shortly after, a single bird high in a distant tree caught my eye. I guess I should have considered it to be the lone Fieldfare I keep hoping will feed on the fruit available in my garden. Not being able to make out what bird this was I got out my video camera – although the zoom is limited.

On selecting the spot metering option on my video camera the dark shape revealed an out of focus Fieldfare having this huge tree all to itself. Then… a group of Starlings dropped down to branches just below it and started preening. The Fieldfare paid them no attention. It wasn’t interested in the fast approaching newcomer either as it came straight towards it, then right round behind it deliberately knocking it off the branch.

The Fieldfare just moved further down the tree beside the other Starlings – again being completely uninterested in them. It went back to surveying the area from on high until… another newcomer Starling swooped in came in too close behind. At this point the Fieldfare had had enough of the badly behaved Starlings and flew off… if only it had come to my garden… everyone was behaving here 😉 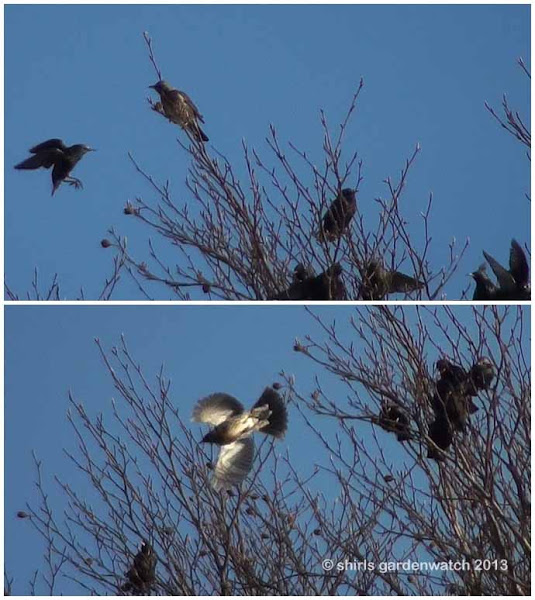 I hope everyone that took part in the 2013 RSPB Big Garden Birdwatch enjoyed it as much as I did. I’ve enjoyed seeing the results and comments other bloggers have put up too. I wonder if anyone else saw an unexpected bird visitor during the hour? I wonder even more, if anyone else sees Reed Buntings in their gardens?