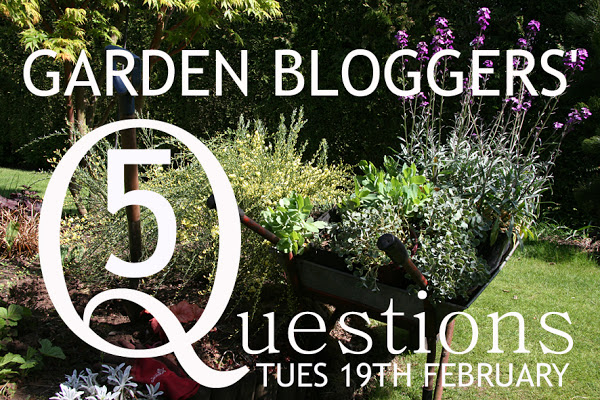 Let the questions begin 😉 Mine are on the Meconopsis, long grass, a plant ID, a Buddleja suggestion and New Zealand flatworms. Can you help here? I’d like to welcome answers via comments on this post or by email. Thank-you to anyone that gets back to me 🙂 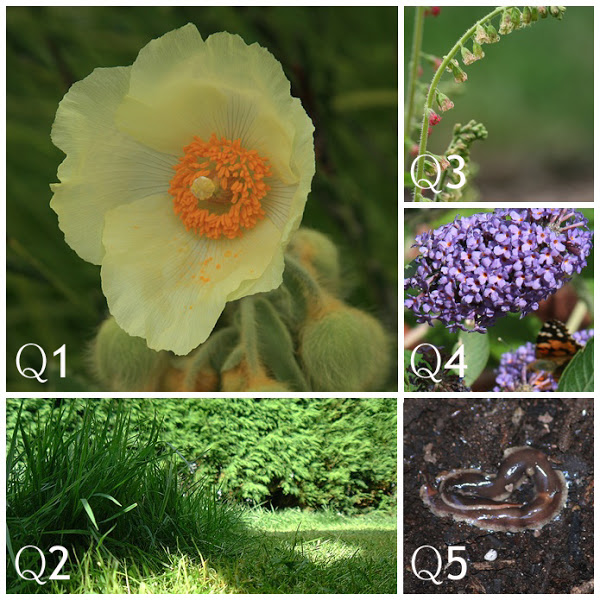 Before I begin I’d like to say a huge welcome and thanks to any bloggers that have taken up the challenge of joining me with a set of questions at such short notice. I have to say I’ve found considering mine more fun than I expected and I hope you have too 😀 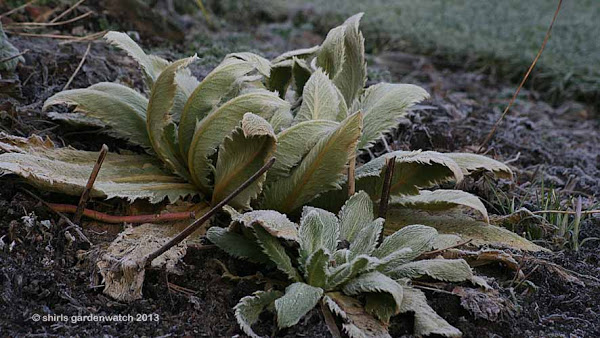 Question 1: Why is my Meconopsis not flowering?
May 2011 was when the yellow Meconopsis shown in the montage above flowered. I know Meconopsis can take a few years to flower. However, I’m still waiting for the other two young plants (exact same size) that were bought at the same time back in 2008. I don’t know what is going on here – does anyone have success at growing these plants?

The image above was taken this morning, unlike the Blue varieties I have, these plants stay in leaf all year round and have faced some pretty cold winters. Sorry I don’t know the variety. The one plant that did flower grew tall and had clusters of flowers down the stem which opened from the top. Oh yes… the yellow flowers have never been seen since. I do think that plant possibly died. I ahve heard of plants taking years to flower and then dying – but not Meconopsis. 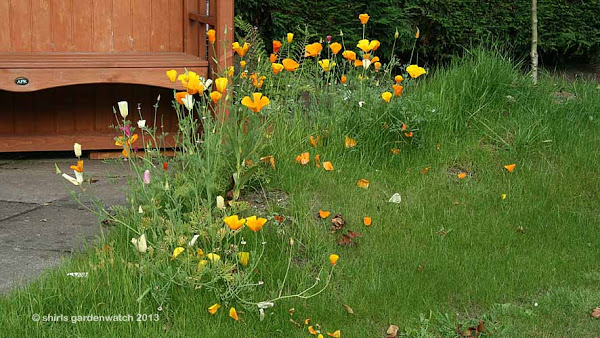 Question 2: Any variety suggestion for a grass mound?
Having built two small grass mounds on either side of my arbour path I’m disappointed with the way they are looking during the growing season. I wondered if anyone has a grass mound in their garden that stays short enough (without clipping) so that clover and other small wildflowers could successfully grow with it. I know grass is a greedy plant and can choke out other plants.

July 2010 is when the newly sown grass seed (general mix suitable for shade) shown above thickened up and the Californian poppy seeds that I added came in to flower. You can roughly see my vision here. Once again, disappointingly the next year I had no flowers – well perhaps just one! I don’t want to start again with this unless I have to as it took ages to get the shape which isn’t shown to clearly above. 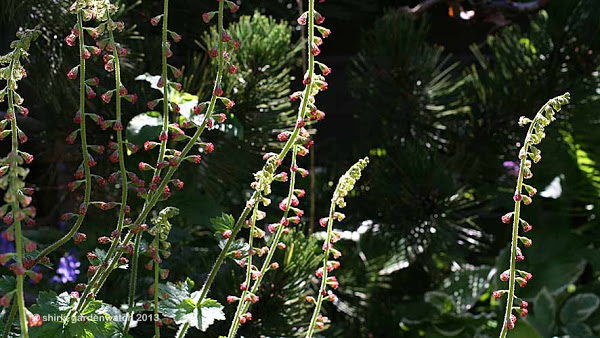 Question 3: Does anyone know what this plant is?
My guess is that the plant above arrived in my garden (it began as a single plant) via birds. I definitely didn’t buy it and initially I considered pulling it out thinking it could be a weed. Then when the tall stems with tiny trumpet flowers running up them grew from a neat clump of leaves I considered even if it were a weed I quite liked. However, I doubt it is a weed as it would have spread much quicker round my garden than it has. I’m guessing there has to be a number of bloggers who might know what this is? 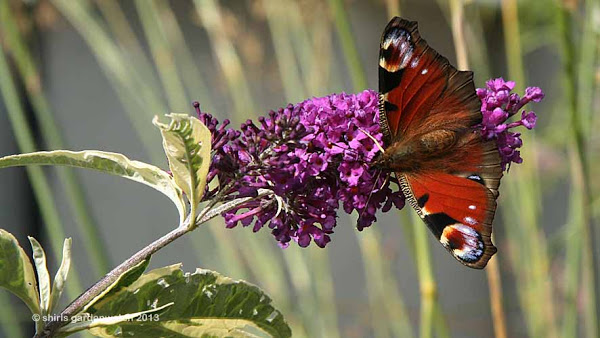 Question 4: Has anyone tried the Buddleja Buzz Series?
From memory the Buddleja above is a Davidii which was growing in my sunny open front garden. Space is limited here due to the parking of cars and after a revamp to planting in my main triangular border I removed this plant a few years ago.

Sedums in this border are a magnet to butterflies and in the few days after my Dad died last September I spotted a new species to my garden (the Comma). As time has past, I’ve decided I want to attract even more species of butterflies to this area – now in memory of my Dad 🙂

After seeing the Buzz Series mentioned at RHS Hampton Court as a good (pretty small) Buddleja for butterflies I was wondering if anyone has tried growing it and how it has performed. I’m guessing this is a new introduction. I was thinking of the magenta one and growing a couple together – it’s height I don’t have space for. 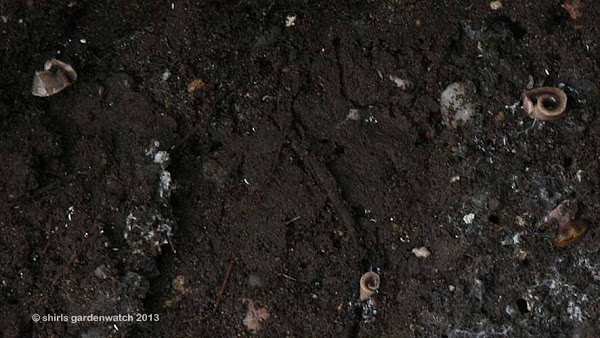 Question 5: Does anyone have New Zealand Flatworms in their garden or allotments?
For those that don’t know about this earthworm hunter and destroyer, it covers the earthworm then excretes an enzyme that enables it to absorb it – basically it feeds on them in a horrible way. If you ever find a New Zealand Flatworm you should destroy it before it destroys your earthworm population! This can easy be done by lifting the flatworm and putting it in a jar of salted water. I might suggest a jam jar with lid is used. Within a couple of days the poisonous enzyme gets the flatworm itself and the worm goes milky (and smelly too if you were to open the jar).

Sorry, I hope you haven’t been having breakfast of lunch when you’ve been reading this. My garden is living proof that a garden can survive with a very, very minimal population of earthworms so don’t worry if you ever see one in your garden or allotment – you should be aware they could be around though.

Oops… on that unpleasant note I’ll ring the bell and say my Questions have come to an end – I hear shivers of relief! I’m looking forward to seeing what other Bloggers’ Questions might be around today – check out the comments for other Blog links. It’s probably safe to say they are likely to be much more pleasant questions than my last one… enjoy the day 🙂

This post was published by Shirley for shirls gardenwatch in February 2013.