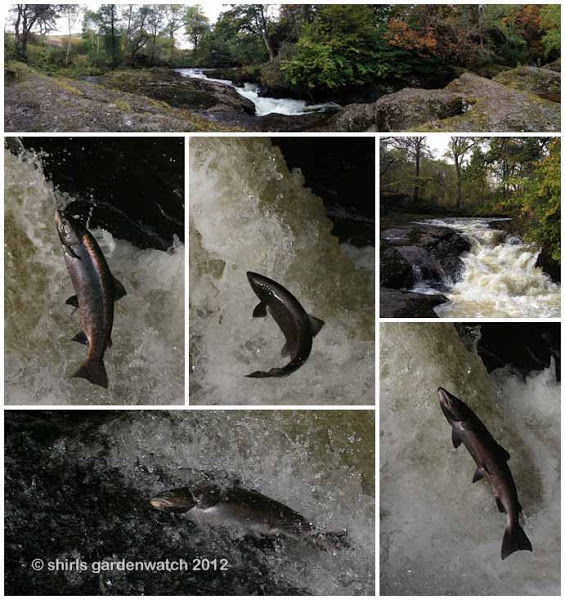 The close views of Salmon leaping promised at Buchanty Spout definitely didn’t disappoint. The heavy rainfall of the day before swelling the river added to the spectacle. The sun came out lighting up these beautiful fish as they leapt in the air. It was reported that hundreds were seen this day, October 14th 2012. I was spoilt for choice selecting footage. I am delighted to finally be sharing my captures.

After previous lengthy posts I’m keeping this brief. I’ve added some text in the video below which I really hope you’ve time to watch. These are just a few highlights from an hour spent in absolute awe of the wild Atlantic salmon passing through a small spout in a Perthshire river. We were very lucky with the timing of our visit.

A week later we returned with my MIL (very carefully helping her down on to the rocks) as she had never seen this spectacle before. Pre blog this wasn’t something I had seen either! Capturing photos on this visit was tad tricky but I got a few and they are mixed with video screen grabs for the montage below. If photos and video were easy to capture they wouldn’t be as much fun.

For those new to my blog and those who might be interested in seeing Salmon leaping at another location in Scotland (near Dunkeld) I’ve added another video here that was previously seen on my blog back in October 2011. Enjoy 🙂

There is quite a backlog of unseen video footage that I hope to sort and share here on my blog during March including the building of a house Martin nest on the front of my house. That too was fascinating to watch – again another lucky moment to be there and notice what was going on at the time.

Hoping you’ve all had a good weekend 🙂