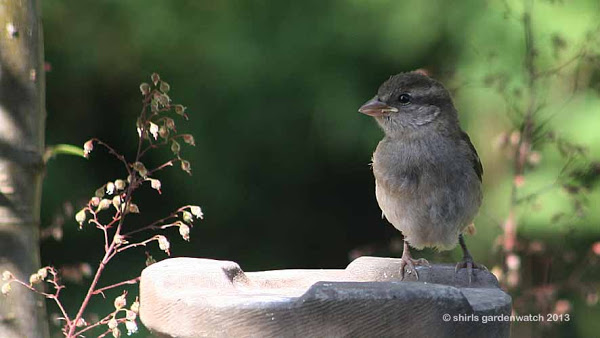 Replacing the bowl part of my favourite birdbath was something I never considered after two extremely cold winters finally took their toll and it split completely in two! I never even knew there were replacement bowls available if I went searching online.

Since then, my bowl-less pedestal has lived on as a landing break for birds en route to a ground birdbath set at the top of the rocky slope down to my tiny pond. This location was also chosen as a photo hotspot knowing it could catch morning or soft evening light. It has worked a treat for both. The juvenile house sparrow above was seen back on July 21st, 2013.

Experimenting with natural backgrounds for photo and video captures of visiting garden birds is something I have had fun with. As my blogging years have rolled in, I have found myself setting up and planting areas I can expect to see birds visiting and patiently keep cameras (still and video) to hand.

Last winter’s bamboo landing strip (for periods of thick snowfall covering the garden) also made for a good photo/video hotspot. Birds landed en route to the running water at my tiny pond and to a snow shelter/ low feeding table . In complete contrast to the bare borders of winter this bamboo landing strip has continued to be a success in the jungle of summer foliage and flowers.

Setting up a good sized ground birdbath that evening visiting hedgehogs could drink from, as well as birds during the day, also began as an experiment using a large terracotta plant saucer. Once this became a success I found myself wishing for a more neutral birdbath colour for photos and video. Yes, I have a fussy eye… I know 😉

The first replacement ground birdbath (large blue/grey plant saucer) has given many fun photo and video opportunities for a number of years, but now its time has come to an end too. The sun had begun to fade the rim and was looking a tad tired. Yes, that fussy eye of mine again 😉

Although I very much encourage birds and other wildlife to my garden I am still very much a plantswoman at heart and how my borders look remain an important part of the gardener that I am. I had tried to accept the large plastic plant saucer by making it part of the border as best I could. I was forever changing the planting around it but it was never going to be perfect.

Garden compromises are something all gardeners learn to accept. Given an ideal world, I would want to keep this ground birdbath location for the pleasure it has given over the years and for those to come. A stone birdbath that blended in with the colours of the sandstone rocks in this area was in my head. I believed my fussy eye would be happy that 😉

A gift of cash, followed by a new online search of birdbath images (I never found any ground birdbaths that caught my eye for my border location) took me to a replacement birdbath bowl and I liked what I saw! There was no glazing, it looked a good colour, it was hand cast, hand finished out of reconstituted stone and it was a good 15” in diameter. I was thrilled with my find and ordered it straight away!

Regular blog visitors please bear with me here – I have a wonderful video capture of this new birdbath in use by a juvenile Blackbird and a group of juvenile House Sparrows below. My video has the bonus of a parent Blackbird coming to the birdbath with food for its young and the young House Sparrows trying to sneak in to the water when the Blackbird had its back turned. I found it all fun to watch and capture. The light colour of the birdbath made for clearer views of the birds in the water too – so a great result all round 😀

Let’s take a look at the longer garden view of how the new birdbath fits in to the front side of this pond border. You can see the homemade feeder tree on the right – this is where the birds usually come from. You can also see why the location of the pedestal works as a break spot to the ground and where the bamboo landing strip fits in too.

Ta-da… and finally… the new replacement birdbath bowl in use…

It’s too early for a full review of this product, plus I’m not using it on a pedestal which is what it is primarily being sold for. I do suspect the colour will darken a tad but that’s absolutely fine for mine on the ground – perfect really! What my fingers are crossed for is that it survives hard frosts and cold winter temperatures – I want to keep this one 🙂

I should add here, I’ve not been given this product for a review. However, I have never been so impressed by the packaging of a product I have received from an online purchase – ever!! I wanted to say… good job and thank-you!

My Amazon order stated that delivery could be expected in 6-10 days but being optimistic I doubted it would take that long. My birdbath was being sent direct from the supplier R & H GARDEN who state in their website “Some ornaments may take a little longer due to hand-finishing.” I guess that is why my order arrived on the 10th day – but it was absolutely worth waiting for 🙂

Orders of this birdbath can be made directly from the supplier a “long-established family-run company based in the heart of Lincolnshire’s farmland”. As a thank-you, I’d like to add a link direct to their product here . At the time of writing this blog post, the product cost is the same as with Amazon but I cannot comment on any possible difference in delivery times.

FAO: all blog visitors, oops…have I really chatted so long on birdbaths? It may seem over-the-top but I cannot stress enough what adding a dish of water (an old baking tray would even do) can add to a garden. I am guessing that many of you will know this already but pre blog and gardenwatching I never appreciated this at all.

Wishing everyone a great weekend – please do share any birdbath stories you have before you go. Have you a homemade one that works for you? What birds are been visiting your birdbath just now? I’ll take a guess at you’ve had juvenile birds too – which ones?

FAO: Rob, Lyn and Jack Barratt at R & H GARDEN – although the courier’s label was clear and present, I appreciated the black marker, hand written name and address on the outside of my parcel as well as the small sender sticker address to the side. I liked the personal touch. The generous, neatly positioned fragile tape going all the way round in both directions gave me reassurance that before I even opened my parcel I expected it well protected. I wasn’t disappointed. Inside the box I was impressed, not by the amount of bubble wrap in the box, but by the practical way it was used. I have never opened such a neat box! After removing the folded top layer of bubble wrap I came to my bubble wrapped birdbath where the tape was once again so very neatly holding it together – like someone really cared about their product. To the person who wrapped my parcel – you genuinely made me smile opening it 🙂

This post was published by Shirley for shirls gardenwatch in August 2013.