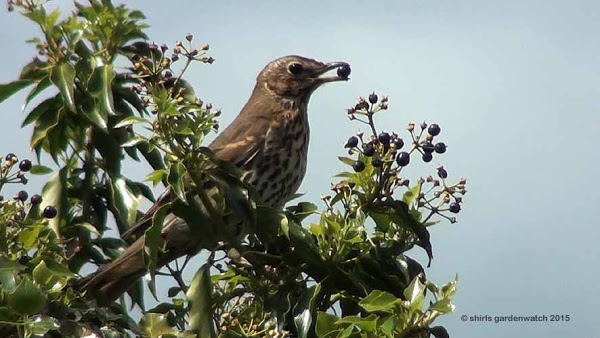 Ivy flowers on the garden pergola have been discussed in a previous blog post back in November 2011. Black ivy berries to follow have been suggested in other blog comments as food for the Woodpigeon too, further suggesting the promise of Bed and Breakfast for a pair of Woodpigeons that nested there last year.

As for the black ivy berries, nope I’ve never noticed them. Well, not until Day 1 of BBC Springwatch (Monday of this week). So, it was a sunny Bank Holiday Monday and the garden awaited weeding but at the same time there was ironing in the basket and a washing in the machine waiting to go outside, but… the Robin nest video footage had me glued to the PC monitor!

Walking away was hard, nesting activity is addictive viewing you know, but domestic duties called as did some time outside in the garden and in the sun. Expect the unexpected and all that, but as the washing machine door was opened, movement outside caught my eye that I really wasn’t expecting…

On top of my ivy clad pergola, a Song Thrush was moving about. That, in itself was a nice sighting as they are shy visitors. A quick dash for the video camera ensued and then on zooming in… yep you’ve guessed right… it was eating black berries on my ivy! In May… really?

“In autumn, ivy flowers attract insects, which in turn provide food for robins and wrens. When the black berries appear in the middle of winter, they’re devoured by everything from thrushes, waxwings, starlings and jays, to finches and blackbirds.”

“Calorie-rich ivy berries are loved by birds, including the song thrush, mistle thrush, redwing, blackbird and blackcap. Although the berries appear in November, birds don’t tend to eat them until around now – shorter-lived berries such as rowan and hawthorn are eaten first, leaving the longer-lasting ivy berries until last. According to the RSPB, ivy berries contain nearly as many calories as Mars bars, gram for gram.”

So, all these years as I’ve watched and watched with great anticipation for my Wisteria to flower towards the end of May, over on the other side of the pergola, there has been something going on that I never knew about until now. My ivy has been feeding the birds! Seeing is certainly believing 🙂

Wow… this week has seen two firsts for my garden (the other being our Robin nest having chicks being fed). It’s almost midnight and Mr/Mrs Hedgehog has just popped by… so its time to say good night from us both 🙂