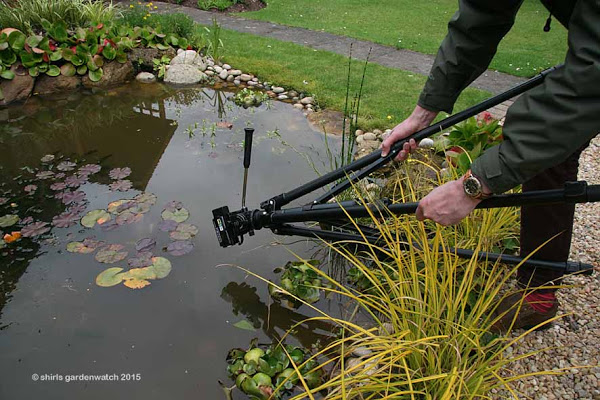 There was a deep inhale of breath as the tripod toppled and the video camera entered the water in the garden pond! A quick arm’s reach to catch a tripod leg stopped the whole camera going fully under water. Okay, so I have been secretly wishing for an underwater camera to see all that’s living in my garden pond but this just wasn’t going to work.

Today’s simulation of the near garden and pond watching disaster.
A huge thank-you to my very capable assistant for not repeating the incident.

After a seriously brief, stunned moment looking at my wet video camera, I quickly removed it from the tripod head and shook it frantically in the same downwards motion in an attempt to get any water out of it. I stood shaking the camera over my pond until no water came out and walked indoors confessing to my careless mistake in not stabilising the feet of the tripod in the gravel path edging my wildlife pond.

My garden visiting companion daughter suggested putting my camera in a box of rice as we did for her sister’s mobile phone after a water dipping event of the bathroom kind. I seriously doubted it would work and feared this year’s pond action filming was over before I had even started to share it here on my blog. 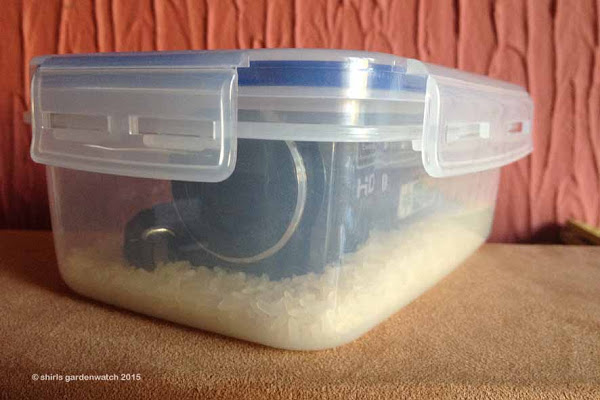 Camera sat on rice in closed box to draw out moisture seen on lens.

As per this blog title, incredibly, my video camera survived its water adventure and did work again to film another day – just five days later!

It was a surprise to see Salmon leaping up at Ossian’s Cave, The Hermitage, Perthshire on July 29th. I didn’t expect to see them there at this time of year. I carefully held my camera tripod filming the salmon whilst holding an umbrella overhead to keep water spray off the newly working (dry) video camera again. Ha-ha… my companion daughter pointed out that if the camera fell in this water there was no retrieving it… she would be correct there 😉

When the video camera fell in to my pond, disappointment was a serious understatement. Recent video captures of mating large red damselflies laying eggs under plant leaves in my wildlife pond were sitting waiting to be edited. Many interesting clips with pond skaters and other pond wildlife sat in folders with plans to start a whole series on the wildlife that a pond can attract. Yay… I can still do that 🙂

This is an evening posting with just under 30 minutes to go until the predicted best time to see this year’s Perseid Meteor shower here in the UK. It could be a bit cloudy over our garden but we’re off outside to see if any meteors are to be seen. Enjoy the skies if you go out, and do remember there are special cameras that work underwater for garden ponds so take extra care with yours 🙂

This post was published by Shirley for shirls gardenwatch in August 2015.